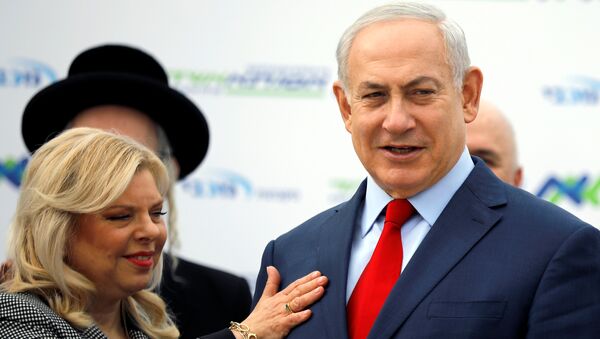 © REUTERS / Amir Cohen
Subscribe
With time ticking until the beginning of a UN General Assembly vote on a proposal to urge Washington to scrap its Jerusalem declaration, Tel Aviv has stepped up its rhetoric.

Israeli Prime Minister Benjamin Netanyahu slammed the United Nations as a "house of lies," saying that "the State of Israel totally rejects this vote, even before [the resolution's] approval."

He referred to the vote on the UN General Assembly's proposed resolution to call on the White House to withdraw its recognition of Jerusalem, insisting that the international community respect Israeli sovereignty.

"Jerusalem is our capital and we will continue to build there, and foreign embassies, led by the United States, will move to Jerusalem. It will happen," Netanyahu said.

The emergency UN General Assembly meeting is scheduled to occur later on Thursday. It comes after the US vetoed a UN Security Council (UNSC) resolution on Monday that called on President Donald Trump to reverse his decision on Jerusalem.

The resolution, drafted by Egypt, was supported by all other 14 UNSC members, both permanent and temporary.

Netanyahu's remarks, particularly his "house of lies" line, were met with instant ridicule on social media, with users pointed out the absurdity of a state founded thanks to a UN mandate slamming the international body.

Netanyahu does know a thing or two about House of lies. He presides over one.

Lol…who needs UN, when you have the biggest bully of the world in your side.

Others recalled Netanyahu's previous antics at the UN tribune, including his infamous speech in 2012 where he held up a giant cartoon bomb to describe the supposed state of Iran's nuclear program.

Did Netanyahu bring his cartoon bomb with him today? 😂😂

Nathanyahu is right about the UN being 'house of lies'. Remember Colin Powell's Iraq WMD or Netanyahu's cartoon on Iran nuclear bomb, and, now Haley's Iran Yemen missile — all at the UN.

The situation escalated after the Palestinian militant group Hamas threatened to start the Third Intifada in response to the White House's Jerusalem declaration, with Israel launching a series of airstrikes on Gaza.