Watchdog: Root Causes of Human Trafficking Must Be Addressed to Stop Slavery 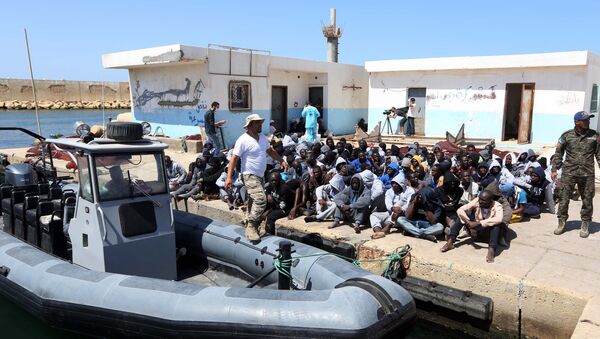 In November, the CNN broadcaster released the materials showing a slave auction in Libya, at which migrants were sold to residents of North African states. The footage resulted in an urgent session of the UN Security Council (UNSC) on the issue of slavery in Libya. The council pledged to exert efforts to stop the human trafficking in North Africa.

LONDON (Sputnik) — A struggle against the root causes behind slavery and human trafficking in Libya is necessary to respond to the problem and to "truly end" it, a spokesman for the US-based anti-trafficking group, Free the Slaves, told Sputnik on Monday.

"To truly end slavery we need to address the root causes. This is a huge illicit industry that generates significant profit at often a low risk for the traffickers. We need to flip that," Terry Fitzpatrick said.

'Lucrative Business': Specialist Says World Must 'Focus' on Eradicating Slavery
According to him, the list of potential measures that should help addressing the problem include stronger enforcement, stronger protection of victims, assistance provided to the victims to rehabilitate them and monitoring of the developments in order to avoid a new falling of the rescued victims into slavery.

The anti-slavery activist went on to stress that the lack of a strong central government in Libya since the outbreak of civil war in 2011, as well as it's location on the central Mediterranean migration route, were factors that contributed to the emergence of human traffickers who prey on vulnerable migrants.

“The situation in Libya in particular creates a kind of migration corridor, where you have a lawless area where central government has no control over large parts of the country. You then have people fleeing from various parts of Africa, from either poverty or violence or both, and moving north, which is where traffickers spot vulnerable individuals and are able to target them whilst they are in transit as migrants,” he said.

Libya has been suffering from a civil war since 2011 when its longtime leader Muammar Gaddafi was overthrown. The instability in the country facilitated the emergence of terrorist groups and numerous attacks targeting infrastructure in the country. Due to the crisis and its geographical location, the African nation has become a gateway for migrants from other African countries hoping to reach Europe.