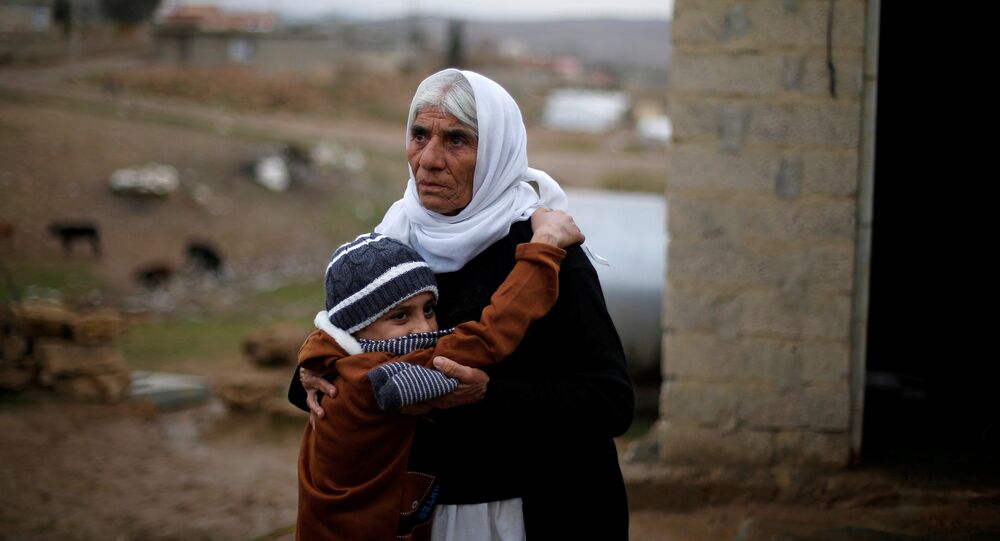 Ali Husein al-Khansuri, a Yazidi activist from Iraq who is helping Iraq's Yazidi minority search for loved ones who were enslaved by Daesh terrorists, told Sputnik that they have been able to buy back 1,700 Yazidis, mostly women and children, who have been held in captivity since 2014.

Ali Husein al Khansuri told Sputnik that Daesh terrorists have now moved their slave markets to Syria's Raqqa. Buying back of Iraqi Yazidis, mostly women and children, who have been held in captivity since 2014, has become the most widespread deal there.

Special agents are helping Iraq's Yazidi ethnic minority search for loved ones who were enslaved by Daesh terrorists.

© AP Photo / Maya Alleruzzo
An activist looks at an Islamic State group marketplace on the encrypted app Telegram, advertising a 12-year-old Yazidi girl as a slave for the price of $12,500, in a photo taken in northern Iraq on May 22, 2016

Faiza, he said, was bought back for $17,000. The necessary sum was gathered with the help of activists and the Organization for the Rescue of Yazidi captives.  After she was bought back on June 21, she was transferred to the refugee camp in Iraqi Kurdistan. Her relatives hardly recognized her, as her face looks differently after three years she spent in captivity, where she was working as a servant.

Nine of her relatives are still in captivity,

© REUTERS / Stringer
Iraq Must Resolve Religious, Ethnic Tensions to Recover From Daesh Invasion
Ammi and five of her children, who are originally from Iraqi town of Sinjar, have been found in Syria's Raqqa. They were freed on November 25, 2016.

Young lady Haifa was also bought back in Raqqa on December 6, 2016. Terrorists were paid $16,000 for her liberation. Most of her family were kidnapped in 2014.

Daesh has been responsible for committing an ongoing genocide against the Yazidi minority group in both Syria and Iraq since August 2014. As a result, thousands of Yazidi men, women, and children have been captured, killed, sexually enslaved and tortured by Daesh terrorists.