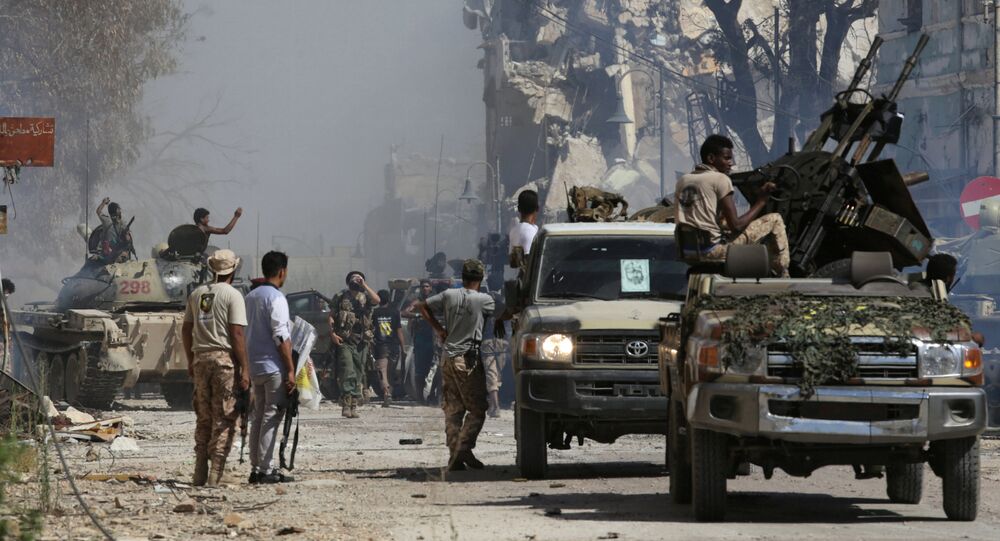 Following the release of a CNN documentary that lifted the lid on the extent of the slave trade in the post-Gaddafi Libya, the international community has called upon Tripoli to take urgent action against human traffickers.

Going undercover to a slave auction, CNN journalists exposed the grim world of slave traders, who operate with seeming impunity in Libya’s capital, Tripoli, selling people for as little as $400.

The revelations shed light on the realities of the post-Gaddafi Libya, where political weakness of the local government, economic stagnation, and the presence of illegal armed groups have put migrants, who come predominantly from Western and Central Africa, in grave danger.

It was Britain's war on Libya that brought about the reestablishment of slavery in the nation with black people being sold in markets in 2017.

Thousands of black people were ethnically cleansed in 2011 by what the Brits referred to as “moderate rebels”.

After its release, the report sent major shockwaves around the world, prompting the international community to call for urgent action against the traders and pressing the Libyan government to double down in its efforts to combat the rampant human trafficking that has plagued the country ever since the Arab spring.

© AP Photo / Mohamed Ben Khalifa
IOM Reveals Slave Markets Operate in Southwestern Libya
In a public statement, UN Secretary-General António Guterres expressed his shock at the extent of the slave trade in Libya and declared that “slavery and other such egregious abuses of human rights have no place in the 21st century.”

“In recent days we have all been horrified by images of African migrants being sold as 'goods' in Libya.”

“It is our collective responsibility to stop these crimes”, the Secretary-General added.

His views were echoed by the leaders of African-led international organizations.

For instance, Chairman of African Union Alpha Conde went on record to condemn the situation in Libya.

“On behalf of the African Union, I express my outrage at the despicable trade of migrants currently taking place in Libya and I strongly condemn the practice of another age”.

“What occurs is utterly dreadful. […] Such acts, as you know, occur in Libya, where humans are sold as slaves at public auctions.”

“This occurred in the past centuries, but it was beyond our imagination that such practices can be encountered today: people are sold, so that they work in the fields”, said de Souza at a press conference in Tunis.

“We must fight against such crimes and unite in our effort to stop them”, he added.

Other African states took an even harder line with regards to Libyan government’s supposed tolerance of slave trade.

For example, the West African nation of Burkina Faso recalled its ambassador from Libya in protest and expressed its ‘indignation at … the images of the slave trade’ to Tripoli’s envoy.

Libyan government fired back by arguing that it cannot solve the global problem alone and other countries should come to its aid in resolving the crisis.

© Sputnik /
French Police Use Tear Gas to Disperse Paris Protest Against Human Trafficking in Libya (VIDEO)
However, Tripoli caved in to public pressure and announced that it will open an investigation into “these inhuman acts”.

Nevertheless, this was insufficient to dampen the public outcry over the alleged inability and unwillingness of the local government to combat the slave trade.

Last Saturday, over a thousand people staged a peaceful protest near the Libyan embassy in Paris, calling for further action on the part of Tripoli.

Interesting that some of the outrage over reported 'slave auctions' in #Libya overlaps with criticism of/opposition to 2011 intervention. Protest outside Libyan embassy in Paris yday included anti-Sarkozy chants

Speaking to Sputnik, one of the protestors said that “ever since Gaddafi’s downfall, Libya has become a major destination of migrants due to the general chaos in the country”.

“Migrants are being hunted by the local militias and the Libyan authorities pretend that they are not aware of the situation”.

“But of course they know, they themselves engage in those activities!”