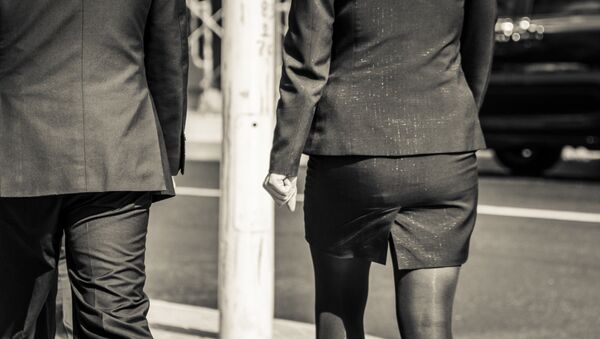 Thousands of women working in Sweden's justice system have taken a cue from politicians, athletes, journalists and movie stars and come out against the harassment.

Sweden, often labeled as one of the most gender-equal countries in the world, has been rocked by successive sex scandals. Hardly had the Nordic country with a government that describes itself as feminist, recovered from hundreds of abuse stories shared by its premier movie and theater stars, when thousands of women working in the law industry stepped forward against harassment permeating the trade

In the aftermath of the global #Metoo campaign, over 4,400 women put their names to a petition by the Svenska Dagbladet daily hashtagged #medvilkenrätt ("With What Right"), which urges the cessation of harassment and abuse of power within Sweden's justice system.

'Men, Not Immigrants': Sweden Rules Out Mapping Rapists' Ethnicity
After thousands of firsthand testimonies flooded in, the organizers of the campaign admittedly stopped receiving more due to information overload. Meanwhile, the corresponding Facebook group has swelled to over 12,000 members in almost no time at all.

"It should be particularly important in a profession that is deeply committed to justice," one female lawyer wrote. By their own admission, the purpose of the campaign is not to hang individuals guilty of harassment out to dry, but rather to stand up for the rule of law and reinforce the people's trust in the legal profession profession.

"We want both women and men to be encouraged to break the established culture of silence at the workplace. Those who dare to raise their voice should not be punished," the initiators wrote.

Several of Sweden's largest law firms reported that they have had internal problems with sexual harassment and unethical behavior. Despite this, the Law Society has not investigated a lawyer for sexual harassment of colleagues in nearly eight years.

One of the signatories admitted that a district prosecutor had harassed her by repeatedly calling and texting her and, when she ultimately declined an invitation to dinner, threatening to destroy her career, calling her a "bloody whore" and suggesting he knew enough people in the profession to ensure she would never get a job.

In another instance, a retired judge was claimed to have shown photos of three defendants in a rape case to a female colleague and asked which of them she would like to be raped by.

Harassing EU Bosses, Star Journalists Get Exposed in #Metoo Afterglow in Sweden
"We demand an immediate end to sexualization, marginalization, and exploitation of women in our industry," the writers continued, calling on those in positions of power to take responsibility and adding that the petition was best described as a "common roar."

Swedish Justice Minister Morgan Johansson wrote in a Facebook post that the efforts from the government to stop sex abuse were obviously insufficient and that major change was needed.

"The common denominator for all people who commit this sort of abuse is that they are men. Therefore it has to be said over and over again: if men's violence against women is to cease, then men must change," Morgan Johansson wrote.

“We will no longer be silent. We will bring those responsible to account and let the justice system run its course when needed. We will put the shame where it belongs — with the perpetrator and those who protect him. We know who you are." #TystnadTagning pic.twitter.com/fIQVVLJZFK

​Previously, a similar petition among film, theater and TV stars gathered over 700 signatures, including that of Oscar winner Alicia Vikander. A like-minded petition witnessing abuse and harassment harvested over 600 signatures from Swedish singers.

​Additionally, several high-profile journalists have lost their jobs following allegations of rape and abuse. All of these are seen as the aftershocks of the #Metoo campaign triggered by allegations against Hollywood star producer Harvey Weinstein.