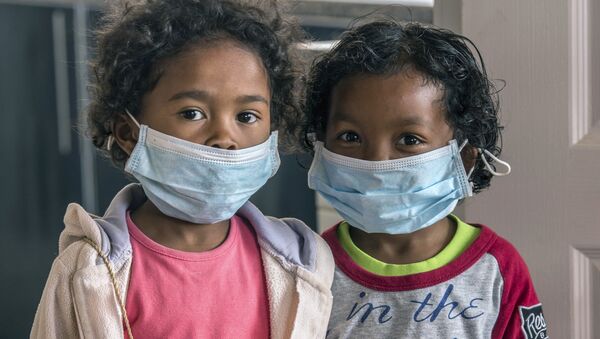 © AP Photo / Alexander Joe
Subscribe
There have been fears a recent plague outbreak in Madagascar could spread to Africa and Europe but a World Health Organization spokesperson told Sputnik why they were not recommending putting the island into quarantine.

Madagascar, an island nation off the coast of south-east Africa, has been hit by an outbreak of pneumonic plague, which has killed at least 124 people since August.

The World Health Organization (WHO), which has deployed 115 people to the island and delivered 1.3 million doses of antibiotics, said it was not recommending putting the island into quarantine.

"WHO advises against any restriction on travel or trade to Madagascar based on the current information available," a WHO spokesperson told Sputnik.

The Evidence and the Advice

"The evidence tells us that the risks associated with shutting borders are higher than keeping them open. Shutting borders creates social disruption, suspicion, underground routes and other negative effects that interfere with an effective response," the spokesperson told Sputnik.

With more than 125 people dead of pneumonic & bubonic plague in Madagascar, the WHO has issued warnings to 9 countries in the region pic.twitter.com/IFSBpym3m7

​"It is far more effective to keep society functioning as normal and to concentrate on the most effective actions, such as informing and protecting the public, training health workers, following up on cases and their contacts and so on," said the WHO spokesperson.

"International travelers to Madagascar should be informed about the outbreak and the necessary protection measures. Travelers should protect themselves against flea bites, avoid contact with dead animals, infected tissues or materials, and avoid close contact with patients with pneumonic plague," he added.

The daily number of #plague cases reported in #Madagascar has been declining as of 12 October. Most recent confirmed case: 20 October. pic.twitter.com/HtXvRJPY4z

​But the WHO is helping seven nearby countries — South Africa, Comoros, Mauritius, Mozambique, Seychelles, Tanzania and the French colony of Reunion and Mayotte — to increase plague preparedness and surveillance.

Ethiopia and Kenya are also raising preparedness levels because they have airline connections with Madagascar.

"The overall risk of further spread of plague from Madagascar at the global level is low, and at the regional level is moderate," the WHO spokesperson told Sputnik.

The most common form of the disease is usually bubonic plague, which is transmitted by fleas carried by rats and cannot be transmitted from human to human.

But 67 percent of the victims in this outbreak have been infected with the deadliest pneumonic form of the disease, which can be transmitted by respiratory droplets from coughing.

​The plague has already spread from the Ankazobe district into the capital of Antananarivo and the port city of Toamasina.

"Although plague is endemic to Madagascar, the current outbreak is occurring in densely populated cities, and has spread to non-endemic areas which are not used to handling plague cases," the WHO spokesperson told Sputnik.

"The proportion of pneumonic plague — the form which can be transmitted from person to person — is much higher than in the past. Pneumonic plague requires immediate intervention because of the associated high case fatality rate and high transmissibility," he added.

"There are exit screening processes in place at ports and airports in Madagascar. People with plague will be severely sick and easily recognized. The incubation period is short (1-4 days) so anybody traveling who is incubating plague is likely to become sick while traveling or shortly after arrival," Professor Whitworth told Sputnik.

"The risk to the UK and Europe from returning travelers is graded as low or very low, for the reasons given above. There are few direct flights to Europe from Madagascar and the number of travelers is likely to be quite low," Professor Whitworth told Sputnik.

The WHO spokesperson said that Madagascar's Ministry of Health had begun to see a decline in reported cases, but people were still being admitted to hospital.

"At this time we cannot say with certainty that the epidemic has subsided. We are about three months into the epidemic season, which goes on until April 2018.

"Even if the recent declining trend is confirmed, we cannot rule out the possibility of further spikes in transmission between now and April 2018," the WHO spokesperson told Sputnik.

Officials have reportedly told residents to stop practicing a ritual called "famadihana," which involves digging up the bones of loved ones, unwrapping them, re-wrapping them and parading them through the streets.

The WHO has released US$1.5 million through a Contingency Fund for Emergencies but says more money is urgently needed.

In 2014, an outbreak of the Ebola virus in west Africa led to concerns about it spreading to Europe and other continents.

The WHO did not impose quarantine on Sierra Leone or Liberia, the two worst affected countries, but several countries, including Australia, Jamaica and Suriname, imposed their own ad-hoc bans.