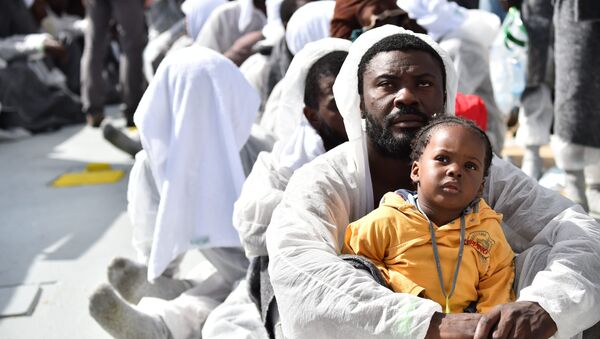 UK-supported Libyan coastguard forces are making illegal money by stopping migrant vessels, detaining the refugees, exposing them to brutal violence and releasing them only after they pay, according to The Independent citing victim’s accounts.

Britain, among other countries, has been supporting Libya’s coastguard with training, money and equipment despite heavily documented evidence of refugees being abused and held prisoner, according to The Independent.

Human Rights Watch (HRW) has collected numerous testimonies from migrants who were detained at sea by Libyan coastguards and had to subsequently bribe their way out of Libyan detention centers.

'Flagrant Human Rights Violations': Plight of Refugees in Libya
According to the documented evidence reported by The Independent, the coastguard is using its legitimate power to collude with the smugglers and further facilitate illegal human trafficking.

Judith Sunderland, the associate Europe director for Human Rights Watch, explained that there could be an “overlap” between smugglers, armed groups and recognized authorities in Libya, which remains “fractured between two rival governments and numerous militias.”

“We are concerned about the violent, reckless, erratic behavior of coastguard forces receiving support and equipment from Europe,” Sunderland said, as quoted by The Independent.

The EU's handling of the crisis has faced a storm of criticism by human rights watchdogs, which demand more action from Brussels to stop the way asylum-seekers are treated while trying to flee the country.

Sunderland further said that these coastguards are unreliable partners and there is a clear danger that EU money, training and equipment is “feeding a vicious cycle contributing to further pain and suffering, and ultimately not serving its aims.”

According to multiple accounts of migrants the Libyan officers beat them and rob them after intercepting them at sea, the media outlet reported.

Story of a Migrant

Stephane, a 30-year-old man from Cameroon, told The Independent, ““While they were beating us they demanded money, dollars, telephones – they took everything,” he said. “They claimed that if we gave them money, they would take us to Italy themselves.”

You Don't Understand Libya: Boris Rebuffs Critics Over 'Dead Bodies' Remark
However, after giving everything he and the other passengers had they were transferred to a prison near Sabratha, one of the biggest smuggling hubs in Libya, where he was kept for three weeks.

According to Stephane while he was kept in prison the uniform clad officials kept coming and offering to free prisoners for €155 ($182) a head. But with no money or possessions left after the first crossing, the bribe to release Stephane and 56 other people was paid by the same Cameroonian smuggler who organized the initial crossing.

Stephane’s ordeal is the latest in a series of horrors that the Libyan coastguard inflicts on human lives. There are allegations suggesting that these guards have shot at humanitarian rescue ships, beat migrants and caused sinking of boats, according to The Independent.

Europe's controversial 10-point action plan was adopted in 2015. It calls for the EU to reinforce its Joint Operations in the Mediterranean [border security operation] both financially and geographically, take additional measures against smugglers, and improve asylum application processing. The plan also stipulates migrant fingerprinting, emergency relocating mechanisms as well as the cooperation with the so-called "Libyan authorities": the country, that plunged into civil war in 2011 after its longtime leader Muammar Gaddafi was toppled and brutally murdered in the course of a violent uprising, is currently divided into multiple parts.

The UN-backed "unity government" has been residing in Tripoli, has so far failed to extend its control over the majority of Libya's territory. The United States and other Western powers view the Government of National Accord (GNA) as Libya’s best chance to fight Daesh, revive dwindling oil production and fight human-trafficking networks, but the government has been unable to extend its authority beyond Tripoli.

The ongoing Libyan war along with other conflicts raging on the continent have already forced around 1 million people to flee Libya.