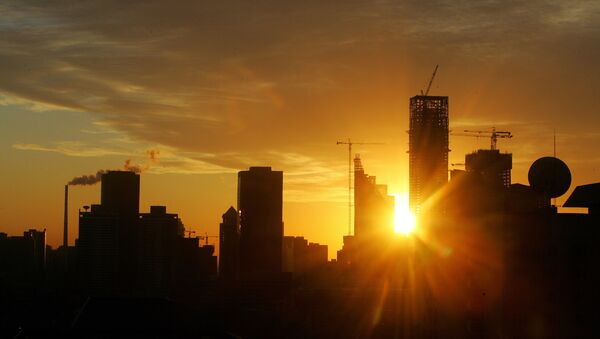 China and India's efforts to reduce the disastrous effects of global warming may offset and even overcome the negative consequences of US President Donald Trump's policy, Carlos Rittl, executive secretary of the Brazil-based Climate Observatory, told Sputnik.

Rittl drew attention to the fact that the two countries have recently taken measures aimed at closing coal-fired thermal power stations. Due to this strategy Beijing and New Delhi may significantly lessen greenhouse gas emissions, overlapping the increase in carbon dioxide outflow under the Trump administration.

"Under the administration of Donald Trump with Congress fully controlled by the Republicans, the US has already made it clear that it will reconsider a number of agreements concluded by the previous administration and cut funding for a number of UN programs, including the climate [change] program," Rittl told Sputnik Brazil.

Global Warming For Real: 'We Could Lose Large Proportion of Major Food Crops'
In June 2017 Trump announced that the US will withdraw from the Paris climate accord, which envisages the reduction of carbon emissions as well as financial assistance to the countries affected by pollution. Previously, the Obama administration pledged to cut harmful atmospheric emissions by up to 28 percent by 2025.

Rittl recalled that in accordance with the Paris Agreement the countries involved agreed to allocate $100 billion per year between 2020 and 2025 specifically to help the poorest countries overcome the implications of the climate change.

"It is very important today to make the agreement work, and allocate the funds, otherwise the consequences could be catastrophic," the Brazilian expert highlighted.

He underscored that climate change "is already affecting our lives." The expert bemoaned the fact that the poorest countries are unable to fight global warming on their own and overcome such disasters as, for instance, extreme drought which one observes every year in Africa.

"Such phenomena as hurricanes and floods also pose a serious challenge to some islands in the Caribbean and Southeast Asia regions," Rittl said.

IMF: Global Warming to Affect Low-Income Countries the Most

Deadly, Intense ‘Lucifer’ Heat Waves May Soon Scorch Southern Europe Regularly
According to the International Monetary Fund's (IMF) World Economic Outlook (WEO) report, the increase in temperatures will affect the economic future of low-income countries. Given this "the international community must play a key role in supporting these countries' efforts to cope with climate change," the report says.

Even if the temperature rises by only one degree by the end of the century, the poorest states may lose up to 10 percent of their gross domestic product (GDP). Just a rise by one degree would be enough to reduce the production of agricultural goods and expose the least prepared regions of the world to more frequent epidemics, natural disasters and other misfortunes. Developing countries, including Brazil, may also fall prey to global warming, the report warns.

"Climate change is a negative global externality of potentially catastrophic proportions, and only collective action and multilateral cooperation can effectively address its causes and consequences," it highlighted.

Speaking to Sputnik in early September Dr. Senthold Asseng, a professor of agricultural and biological engineering at the University of Florida, pointed out that global warming has already decreased the harvest of four of the most popular crops worldwide.

If there is a rise in the temperature by 4 degrees globally, "we could see a loss by a quarter of major crops," he said referring to wheat, rice, corn, maize and soybean.

"These crops supply two-thirds of the global food [supply] at the moment so we could theoretically lose quite a large portion of major crops," the professor warned.

However, Trump is pushing ahead with his decision to leave the Paris climate accord.

According to The New York Times, the Trump administration is taking its first steps to scrap Obama's Clean Power Plan, which "required states to cut greenhouse gas emissions from existing power plants by 32 percent by 2030." Under the plan, hundreds of American coal-fired power plants would have been closed across the country.

Earlier, in March 2017, the US president inked an executive order aimed at nullifying his predecessor's climate change policies and reviving the coal industry.

Trump is well known for his climate change denial. According to Vox' estimates, he has tweeted global warming skepticism at least 115 times.

​"The concept of global warming was created by and for the Chinese in order to make US manufacturing non-competitive," Trump wrote in 2012, dropping the hint that the issue is nothing but a myth.

NBC News just called it the great freeze — coldest weather in years. Is our country still spending money on the GLOBAL WARMING HOAX?

"Is our country still spending money on the global warming hoax?" he tweeted in 2014.

In this context it is hardly surprising that China and India is likely to outpace the US in tackling the climate change challenge.