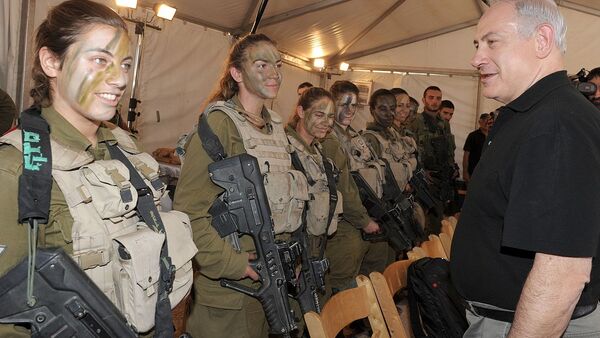 If looks could kill Israeli military servicewomen could be at the forefront. Instagram account where the young camouflage clad ladies demonstrate their beauty has already attracted tens of thousands of followers.

Military service in Israel is mandatory both for men and women, men serve three years, while women serve two.

These young women aren’t camera shy and have taken to Instagram to demonstrate that a military uniform and an M-16 over your shoulder can look dangerously sexy.

Some photos of the representatives of the army highlight the fact that the Israeli military uniform can look very feminine.

Other photos really take the phrase “beauty will save the world” to a whole new level.

Although the soldiers have to deal with heavy weaponry and intense training, the ladies are not afraid to show off their fun, playful side, posting sexy photos of themselves.

Many Instagram followers look forward to seeing new photos of these Israeli beauties as there are over 50,000 people following #Girlsdefense on the social media platform.

Women are allowed to serve in 83 percent of the Israel Defense Forces, including combat units. They can choose to spend years of service in the offices of the General Staff, hospitals, educational institutions and other similar places.

However, many women proudly enroll in combat infantry, border police and other combat units.