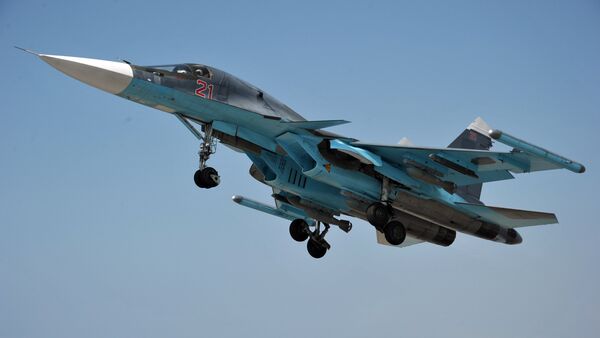 The Russian Defense Ministry denied on Sunday the Pentagon's allegations that Russian jets had attacked the Syrian Democratic Forces (SDF) near the Syrian city of Deir ez-Zor.

Russian aircraft in Syria target only the positions of the terrorist group Daesh, Russian Defense Ministry spokesman Maj. Gen. Igor Konashenkov said, commenting on the claims that Russia bombed a target near Deir ez-Zor knowing that the SDF units and US-coalition advisers were there.

Konashenkov noted that Russia has been conducting the operation along with Syrian forces in the Deir ez-Zor area for a week, adding that the US was notified of it in advance.

"To avoid unnecessary escalation, the command of the Russian forces in Syria gave the US partners an advance notice, through an existing communications channel, on the [territorial] borders within which the military operation in Deir Ez-Zor would be conducted," Konashenkov said.

Russia Fighting Terrorists in Syria Not to Secure a Foothold in Region - Envoy
The spokesman reiterated that Russia carries out its operations based on reconnaissance information that is usually verified through several channels.

"The priority targets for destruction are the terrorists' firing positions from which they are leading large-scale attacks on the Syrian forces," the spokesman said.

Konashenkov pointed out that the Russian intelligence services had discovered no clashes between Daesh fighters and any armed representatives of "third parties" on the eastern bank of the Euphrates in the last few days. He added that "only representatives of the international coalition themselves" could say how opposition members or coalition allies could make their way into the midst of Daesh troops without any fighting.

The Syrian army supported by the Russian Aerospace Forces last week lifted the blockade around Deir ez-Zor that had been maintained by Daesh for several years. Fighting continues in the east and southeast of the city.

Moscow has repeatedly claimed that decisions about the airstrikes in Syria are made only after thorough verification of the intelligence data. Since the start of the Russian aerial campaign, the West has been accusing Moscow of targeting so-called moderate opposition factions in Syria and civilians. Russia and Syria have continuously refuted these allegations.