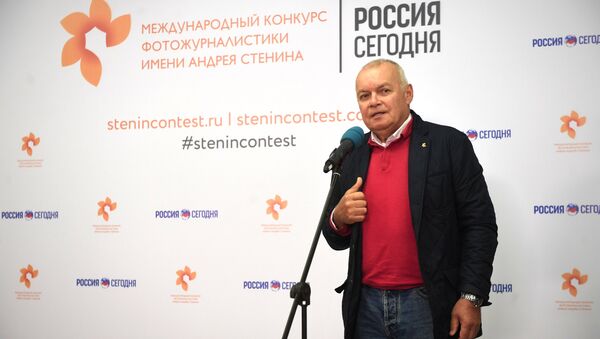 The Rossiya Segodnya International Information Agency launches a new project aimed at telling people about revolutionaries from a new perspective.

MOSCOW (Sputnik) — "The Great Russian Revolution," a special informational project introduced by the Rossiya Segodnya International Information Agency which aims to show key figures from the 1917 Revolution in a new light, is meant to reconcile Russian society through stories of the history of that time, the agency’s Director General Dmitry Kiselev said on Thursday.

The project tells the tales of major revolutionaries, as well as literary figures, and other people of importance to Russian history. It has already published several articles about Soviet leader Joseph Stalin, writer Maxim Gorky, revolutionary and Marxist theoretician Georgi Plekhanov, among others.

"The goal of our project is to cure, to reconcile [the people]. With the project, we are trying to evoke good feelings, and not to deepen the split that appeared 100 years ago," Kiselev said.

Kiselev added that "anyone can look at the revolutionaries from a new perspective … understand the motives [behind], and instruments used by these people."

According to Kiselev, the project attempts to depict these revolutionaries "not as the people that played a disruptive role in the Russian Empire, and not as the saviors that may have failed, but as the people who dreamed to contribute for the best of Russia and the civilization."

This year marks the 100th anniversary of the Russian Revolution. In February-March 1917, the Russian Empire collapsed as Emperor Nicholas II abdicated. The provisional government that replaced the old one was overthrown in October the same year.