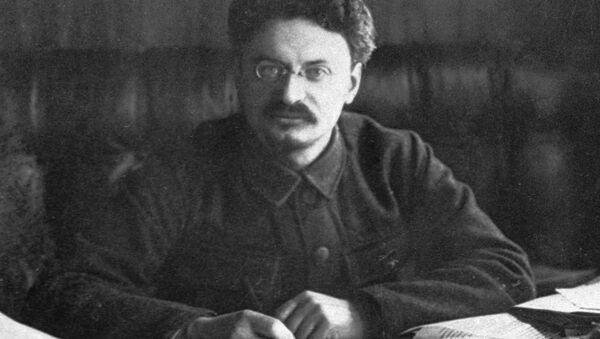 © Sputnik
/
Go to the photo bank
Subscribe
August 21 marked 77 years since the death of prominent Russian revolutionary Lev Trotsky who was assassinated by Spanish-born NKVD agent Ramon Mercader in his house near Mexico City. Sputnik talked to Trotsky’s grandson Esteban Volkov who was in the house when that fatal attack occurred.

“I came to Mexico a year before the assassination. In fact, there were two attempts on his life: on May 24, 1940, when a group of Stalinists led by artist David Alfaro Siqueiros stormed into the house firing indiscriminately into the rooms where Trotsky’s secretaries and assistants worked. My granddad survived by a miracle when [his wife] Natalia hid him in a dark corner,” Esteban Volkov told Sputnik Mundo.

“I was in the next room and they fired a long burst of automatic gunfire at the bed I slept on. Luckily, they missed and I escaped with just a small scratch on my toe.”

Trotsky’s Long Shadow Stalks Western Patriots
He added that Lev Trotsky knew that the respite Stalin had given him wouldn’t last long and that new attempts on his life were bound to follow.

“Finally, Ramon Mercader, a Catalan-born NKVD agent got chummy with a young US Trotskyite woman and befriended members of Granddad’s security guards. One day he asked my grandfather to look at one of the articles he wrote. Next time, as Granddad was reading his writings, Mercader hit him on the head with an icepick,” Volkov recalled.

“Granddad gave out a loud scream, the bodyguards rushed in and overpowered the assassin,” he added. 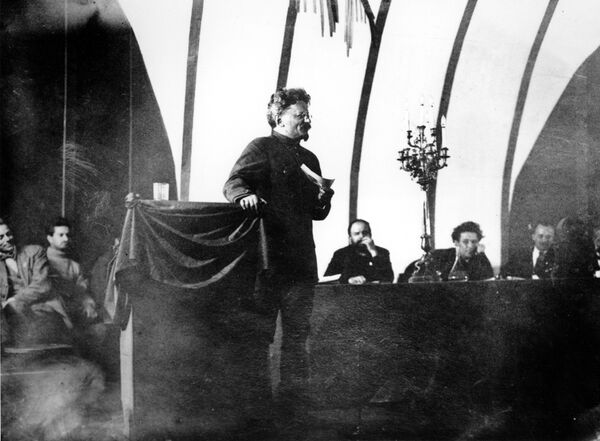 Leon Trotsky sings and addresses a huge assemblage during the sessions of the Third International, also known as The Communist International/Comintern, in Moscow in Dec. 1921. (File)
© AP Photo

Esteban Volkov said that Trotsky ordered his men not to kill Mercader and this enabled the Mexican police to unravel the whole plot.

When asked how, a century after the October Revolution, he assessed his grandfather’s role in it, Volkov said that Vladimir Lenin and Trotsky were the main heroes of the Revolution.

“Lenin played the key role in the creation of the Bolshevik party and coordinated its work. Trotsky determined the course of the Revolution. Unlike Lenin and Stalin, who believed that a socialist revolution should be preceded by a bourgeois one, he emphasized the role of the proletariat and this is how the victorious Russian Revolution established the Soviets of workers’, soldiers’ and peasants’ [deputies],” Esteban Volkov continued.

He added that during the Civil War, Trotsky created the Red Army and that even military experts on the opposite side of the frontlines acknowledged Trotsky’s contribution because without the Red Army the Soviet Union would simply have not come into existence.

After Vladimir Lenin’s death in 1924, Trotsky stood by the ideals of the Revolution.

“He said that, with the Red Army’s help he could have seized power in a matter of just 15 minutes, but he was against a military bureaucratic dictatorship. He wanted to stay true to the principles of the October Revolution,” Volkov emphasized.

“Then, just as Stalin was purging the Leninist leadership in the 1937-1938 trials, Trotsky organized a series of counter-trials in Mexico-City to expose the false nature of Stalin’s 'justice.'''

When queried about the fate of his family, he said that all of them were prosecuted and eventually killed.

“My father, Platon Volkov, was deported and executed. Trotsky’s elder son, Lev Sedov who lived in Paris, died under strange circumstances. He died after an operation to remove his appendix and was apparently poisoned,” he continued. 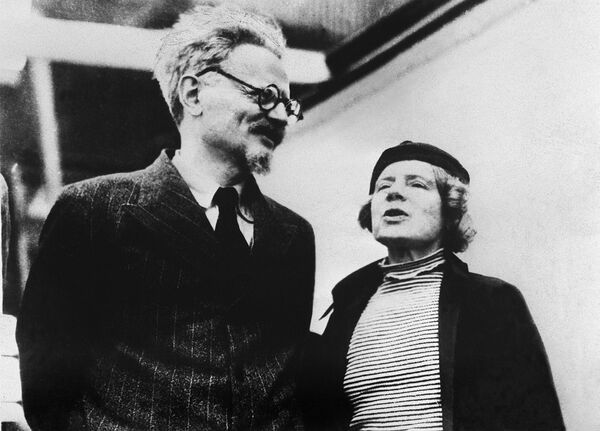 “The other son, Sergei Sedov, who stayed out of politics, was executed nonetheless. My grandmother, Trotsky’s first wife, died in a labor camp, and my mother committed suicide after she was denied permission to return to Russia to reunite with her husband and daughter,” Volkov continued.

It wasn’t until the era of Mikhail Gorbachev that Esteban Volkov could finally come to Russia to meet his half-sister who died shortly thereafter of cancer.

Flashback to 1917: How the Russian Revolution Changed the World
While in Mexico, Esteban Volkov founded the Institute on the Right of Asylum. Trotsky said that there was a ”planet without visas,” and that Mexico was the only country to grant him asylum when Lazaro Cardenaz was President.

“There is no country in Latin America whose people haven’t found refuge in Mexico. During the 1930s, thanks to President Cardenaz, Mexico accepted Spanish refugees who had fled their homeland after the Civil War. This had a favorable impact on Mexico itself as many of those newcomers were intellectuals and academics,” Volkov explained.

Lev Trotsky was chairman of the Petrograd Soviet from 1905 until 1917 and played a leading roe in the 1917 October Revolution. After the Bolsheviks took power, Trotsky serves as a peoples Commissar of Foreign Affairs and later went on to become the founder of the Red Army which emerged victorious from the 1918-1920 Civil War.

During the 1920s Lev Trotsky, a stirring public speaker and a prominent Marxist theorist, was at the forefront of anti-Stalinist opposition. In 1929 he was expelled from the Communist Party and sought political asylum abroad.

Mexico was the only country ready to accept him, thanks much to his friendship with the great Mexican artist Diego Rivera.

Here years later Trotsky was assassinated  by Catalan Communist Ramon Mercader who acting on Josef Stalin’s orders, killed Trotsky with an icepick he had smuggled into the fugitive’s fortified residence in Coyoacan, near Mexico City.

000000
Popular comments
This article in praise of Trotsky is a great example of the split character of RT and Sputnik. Here is a clip of Simonyan saying the opposite of what is presented on media under her control. www.youtube.com/watch?v=kVHS6F2TkFk RT Boss calls Barack Obama 'insignificant human being' I found it interesting that I didn't see this video clip posted here. There is no question that Trump is attacked at Sputnik, with the knowledge that the only current alternative is a Bolshevik-style DNC, such as Obama. So which is it, the article I see before me now, that glorifies Trotsky or the view in the video clip, that the western view is dangerous and a threat to freedom? Another article at Sputnik was sourced from a writer of Khodorkovsky.co, which is an ally and shill of the western media Simonyan so harshly criticizes in her speech. sputniknews.com/us/201708011056078747-trump-white-house-jump-ship/#comments Nikita Danyuk I ask an honest and serious question, how is the content of the speech, what Russian media claims to be, consistent to what we see everyday at Sputnik and RT? How is glorifying the DNC, Trotsky and Obama, consistent with the included youtube speech and wearing a baptismal cross, and criticizing western media tactics?
jas
22 August 2017, 19:28 GMT
000000
jas, Well, "praise"? "glorifies"? Doesn't look to me. The grandson is presenting as a personal witness, historical facts.
elsa.zardini
22 August 2017, 21:06 GMT
000000
Newsfeed
0
New firstOld first
loader
LIVE
Заголовок открываемого материала
Access to the chat has been blocked for violating the rules . You will be able to participate again through:∞. If you do not agree with the blocking, please use the feedback form
The discussion is closed. You can participate in the discussion within 24 hours after the publication of the article.
To participate in the discussion
log in or register
loader
Chats
Заголовок открываемого материала
Worldwide
InternationalEnglishEnglishMundoEspañolSpanish
Europe
DeutschlandDeutschGermanFranceFrançaisFrenchΕλλάδαΕλληνικάGreekItaliaItalianoItalianČeská republikaČeštinaCzechPolskaPolskiPolishСрбиjаСрпскиSerbianLatvijaLatviešuLatvianLietuvaLietuviųLithuanianMoldovaMoldoveneascăMoldavianБеларусьБеларускiBelarusian
Transcaucasia
ԱրմենիաՀայերենArmenianАҧсныАҧсышәалаAbkhazХуссар ИрыстонИронауОssetianსაქართველოქართულიGeorgianAzərbaycanАzərbaycancaAzerbaijani
Middle East
Sputnik عربيArabicArabicTürkiyeTürkçeTurkishSputnik ایرانPersianPersianSputnik افغانستانDariDari
Central Asia
ҚазақстанҚазақ тіліKazakhКыргызстанКыргызчаKyrgyzOʻzbekistonЎзбекчаUzbekТоҷикистонТоҷикӣTajik
East & Southeast Asia
Việt NamTiếng ViệtVietnamese日本日本語Japanese俄罗斯卫星通讯社中文（简体）Chinese (simplified)俄罗斯卫星通讯社中文（繁体）Chinese (traditional)
South America
BrasilPortuguêsPortuguese
NewsfeedBreaking
10:39 GMTGerman Green Party Might Find Some 'Rare Lizards' to Stop Nord Stream 2, AfD Co-Chair Warns
10:35 GMTWorld War II Bomb Suspends Elections at Several Polling Stations in Wuppertal, Germany
09:47 GMTTunisian Lawmaker Says Ennahda Party's Rigidity Led to Mass Resignation of Members
09:41 GMTCanary Island Volcano Continues to Erupt, Forcing More People to Evacuate
09:41 GMTChina Sells Almost $65Mln Worth of Carbon Dioxide Emission Quotas, Environment Ministry Says
09:28 GMTIRGC Commander Says 'US Hand-Made Armies' Failed to Tackle Terrorists in Afghanistan, Iraq
09:21 GMTKate’s 'Coolness' and William’s 'Bullying' Led to Rift With Harry and Meghan, Book Claims
08:21 GMTIndia’s Main Opposition Party Takes a Dig at Grand Celebration on PM Modi’s Return From US
08:11 GMTPolling Places Open for Parliamentary Elections in Germany
08:00 GMTEximbank Will Support Russian Exports to Croatia
07:45 GMTUS Treasury Could Run Out of Cash by Mid-October, Think Tank Warns as Government Shutdown Looms
07:31 GMTGloves Off: Prince Andrew Takes New Legal Strategy, Aims to Fight Sex Abuse Allegations, Media Says
07:10 GMTMan Arrested on Suspicion of Murder of London Teacher Sabina Nessa
07:06 GMTExplosion in Southwestern Pakistan Kills Four Soldiers, Two Injured, Reports Suggest
06:55 GMTMan Utd's Solskjaer Claims Villa’s Winning Goal Was Clearly Offside
06:39 GMTTen People Missing After Landslide in Southwestern China, Reports Suggest
06:14 GMTJapan May Lift State of Emergency by End of September
05:47 GMTBoris Johnson 'Backing Construction of Fleet of Mini Nuclear Reactors' as UK Gripped by Fuel Crisis
05:43 GMTRussia's Only Active Female Cosmonaut Could Set New Record For Duration of Space Stay
05:29 GMT'Are They Paid Actors?' Ex-UK Health Secretary Mocked for 'Comeback Video' in His Constituency