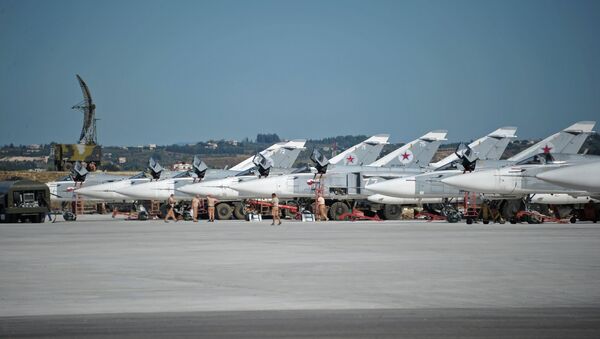 © Sputnik / Dmitriy Vinogradov
/
Go to the photo bank
Subscribe
The Russian Aerospace Forces made 50 sorties and destroyed 180 Daesh infrastructure facilities in the area of Akerbat, Syria.

"Only yesterday, in the interests of the Syrian army's offensive in the area of Akerbat, Russian Aerospace Forces jets made over 50 sorties, resulting in the destruction of about 180 facilities of militants… Fortifications, underground shelters, command posts, separate detachments of terrorists, artillery positions, ammunition and fuel depots," Lapin said.

He said that in the central part of Syria, government troops liberated a strategically important transport junction — the town of Akerbat, which had been turned into a powerful fortified area by the militants.

"At present, the remaining ways of ammunition and material supplies have been blocked for terrorists. The group of units of the Syrian army continues the operation to clear the terrain from gangs of ISIL [Daesh, terrorist group banned in Russia] in the areas to the west and north of Akerbat. Despite heavy losses, the gangs continue to offer serious resistance," Lapin said.

He said persistent battles during the last week resulted in the liberation of eight more settlements, which made it possible to "dismember" a group of militants near Akerbat and defeat it in parts.