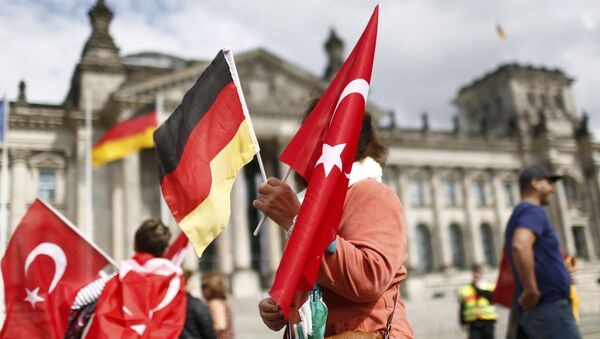 In a sign of further deterioration in bilateral relations, Turkey has retaliated to Germany's warning about travel to Turkey, with some advice of its own about the risks of visiting Germany.

Ankara has retaliated to Berlin's issue of a travel warning for German citizens in Turkey, with its own caution for citizens planning to travel to Germany.

"The election campaigning in Germany is based on resentment directed against Turkey and is directed at preventing our country's accession to the EU," the Turkish foreign ministry wrote on its website on Saturday, Die Zeit reported.

"Turkish citizens who live in Germany or are planning to travel there should be cautious and prudent in the event of possible xenophobic or racist incidents, behavior or verbal attacks."

"I want to say quite clearly, that any Turkish citizen can travel to us," the Christian Democratic Union (CDU) leader told a hustings in Delbrueck, North Rhine-Westphalia.

​​"Turkey's travel travel warning against Germany is a bad joke! Unjustified imprisonment for a lot of Germans is wrong! Nazi comparisons are an insult to our honor," Merkel's chief of staff Peter Altmeier wrote.

​"Is Erdogan warning about travel to Germany so that people won't see how freedom, justice and openness to the world make a country strong," Peter Tauber,  Secretary General of the CDU, wrote.

Turkey's announcement comes after the German authorities issued a travel warning for Turkey on Tuesday, advising Germans to be more cautious when traveling to Turkey in light of the authorities' post-coup crackdown and the increased frequency of terror attacks in the past two years.

Turkey has declared a state of emergency following the failed military coup, in effect until October. The German foreign office warns that on this basis, people may be searched or be arrested for suspected contact with the Gulen movement, even on the basis of accusations from a third party or unintentional contact with a Gulen follower.

France 'Replaces UK' As Champion of EU Ties With Turkey Amid Berlin-Ankara Spat
One of the most high-profile detainments of a German national in Turkey is that of German-Turkish reporter Deniz Yucel, who works for the Die Welt newspaper. He was arrested in Istanbul in February over alleged links to terrorist organizations and propaganda, an accusation which Yucel and the German government reject.

On Tuesday, German Chancellor Angela Merkel said that Turkey's imprisonment of a dozen German citizens last week was a move away from the 'rule of law,' and that Germany would push for the European Union to suspend talks to allow Turkey into the organization.

For its part, Turkey has accused Germany of harboring terrorists. Amid the crackdown against alleged supporters of Fethullah Gulen, hundreds of Turkish diplomats and soldiers have applied for asylum in Germany. Following the victory of Erdogan's constitutional reform program in a referendum in April, many of them were granted asylum, unofficial sources in the Federal Office for Migration and Refugees [BAMF] told Germany's Sueddeutsche Zeitung, WDR and NDR news networks.

Last month, Turkish President Recep Tayyip Erdogan urged Turks in Germany not to vote for Merkel's CDU party, her coalition allies the SPD or the Greens in Germany's forthcoming elections, calling them "enemies of Turkey."