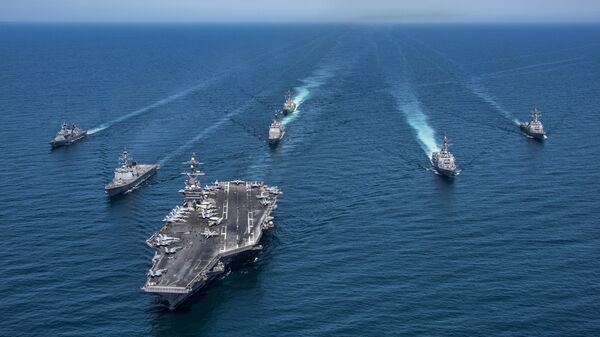 Ekaterina Blinova
All materialsWrite to the author
The US-North Korean crisis didn’t emerge overnight, US peace activist Jan R. Weinberg said, stressing that Donald Trump's warmongering policy toward Pyongyang is the continuation of Barack Obama's Pivot to Asia strategy. However, as polls show, Americans are not happy about the escalation of tensions in the peninsula.

The Trump administration's assertive stance toward Pyongyang is nothing new. In fact it's simply a continuation of the Pivot to Asia policy championed by former President Barack Obama and former Secretary of State Hillary Clinton, Jan R. Weinberg, a US peace activist and the founder of "Show Up! America," told Sputnik.

"The Trump administration remains consistent in a succession of presidents, including Obama, in fostering the basis of America's projection of power in the Indo-Asia-Pacific," Weinberg stressed.

The peace activist recalled that the Obama administration's Asian policy, "of which the Trans-Pacific Partnership (TPP) was a fully integrated aspect," envisioned the deployment of military assets in the region, sales and gifts of weapon systems to US regional "proxies," and enhanced military to military exercises.

N Korea Warns Australia, UK Against Participation in S Korea-US Drills
"Given that China verbosely announced their admonishments all along the way it only makes sense to consider that the North Korea regime has perceived the same fears as expressed by China and view the United States and the militarily enhanced Indo-Asia-Pacific national alliances as direct threats," he said.

Meanwhile, the North Korean embassy's charge d'affaires Jin Jong Hyop told Sputnik on Tuesday that Pyongyang had completed the preparation for the previously announced strike in the direction of Guam, where a US military base is located. Earlier, on August 16, Pyongyang stated that the Guam strike was postponed.

"Everything will depend on whether the United States acts sensibly or not. If they do not do so, they will be shamed yet again on the Korean Peninsula in front of the whole world," Jin Jong Hyop said.

On Wednesday, North Korea released a propaganda video, which simulated a missile attack on the US Pacific territory of Guam.

"For example, China implored Obama to not forward deploy 'strategic bombers' to Guam, a warning which was ignored," the peace activist said. "In turn, China announced that they turned a set of ballistic missile systems toward Guam, which are dubbed the 'Guam Killers.' In other words, Guam was in the making prior to the Trump administration." 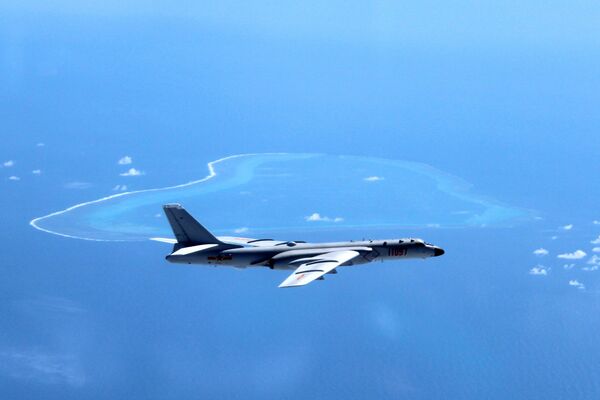 To complicate matters more, it is not just the North Korean crisis which remains the region's "powder keg," Weinberg noted, referring to the fact that regional players are involved in numerous maritime and territorial disputes. According to the activist, these disputes could easily become a trigger for local conflicts given the level of militarization of Asia-Pacific nations.

In his earlier interviews with Sputnik, Weinberg warned that the US-led militarization of the Asia-Pacific region might lead one day to the equivalent of the Cuban Missile Crisis.

"The fact of the matter is there are many flashpoints that can easily be set ablaze from one ember if 'shots are fired' between the N Korea and US militaries, which includes US allied Asia-Pacific nations," the American peace activist noted.

Clinton's #Emailgate: The Dangerous Militarization of the Asia-Pacific Region
He pointed out that it looks rather strange that the US Congress remains "virtually silent aside from a few comments regarding the mutual warmongering threats between Trump and Jung-Un."

"With the United States Congress continuing its abstention regarding their Constitutional authority to deliberate on a nation-by-nation basis for the need to officially declare war, which was further clarified by the War Powers Resolution, the United States Armed Forces has forestalled the discussions of withdrawal, in whole or part, of the military from the Indo-Asia-Pacific. They are in charge of death and destruction, not diplomacy," Weinberg stressed.

It appears that the Pentagon and the omnipotent US military industrial complex have taken the helm of the American foreign policy. However, this hasn't happened overnight, the activist highlighted.

"It is as if Donald Trump is the new press secretary for the Pentagon," he remarked.

"In the United States, a president is elected by the public and in no time whatsoever the business and strategic interest of the armament manufacturers and top-brass military shape the new Commander in Chief in their own image. Point being — it does not appear as if Donald Trump is actually in command of the military, which is basically on autopilot in a variety of 'theaters' including the Asia-Pacific," the peace activist underscored.

Pyongyang Warns Against 'Playing With Fire' Amid US-South Korean War Games
Thus, the US-South Korean Ulchi Freedom Guardian (UFG) exercises are going on amid heightened tensions on the Korean peninsula.

On Thursday Pyongyang once again lambasted the drills and promised to respond to "playing with fire on top of a nuclear warehouse."

Although the US has always handled the Korean issues from the position of strength, new polls have revealed that a majority of American voters disapprove of President Donald Trump's tough stance toward the Democratic People's Republic of Korea (DPRK).

Citing the latest Harvard-Harris survey, The Hill reported Friday that 57 percent of respondents do not support Trump's way of dealing with the North Korea crisis, while 56 percent said that the US president's "fire and fury" rhetoric is "over-the-top and unhelpful."

Despite Russia and China's plea to Washington to consider the "double-freeze" solution, which envisages the suspension of both Pyongyang's missile tests and US-South Korean war games, the Pentagon signaled that the military drills on the Korean peninsula were "not on the table as part of the negotiation at any level".

"If the scale of the exercises causes a new surge of anger on the part of the DPRK, it may further aggravate tensions on the Korean peninsula and this cannot but be a source of alarm," expert on Korean affairs Liu Zhao of Liaoning Academy of Social Sciences told Sputnik China on Tuesday.