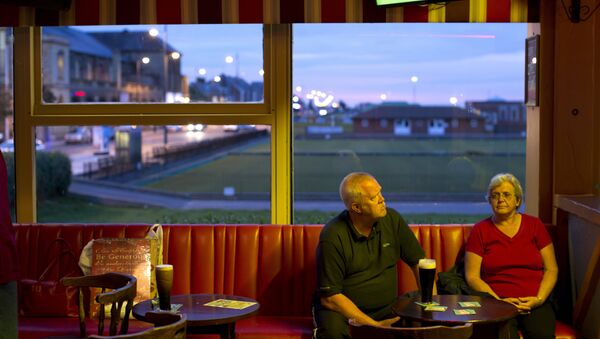 © AP Photo / Emilio Morenatti
Subscribe
International
India
Africa
Even without the rock and roll, binge drinking and drug taking among baby boomers is reaching worrying levels. Experts claim urgent action is needed to tackle this growing crisis as new figures show an alarming increase in misuse among those in their mid-50s and older.

Researchers from the South London Maudsley NHS Foundation Trust in the UK and Flinders University in Adelaide, Australia are calling for a coordinated approach to tackle drinking baby boomers. They warn the seeds were sown by unregulated alcohol advertising and permissive attitudes to drugs such as cannabis in the boomers' youth.

Worryingly, the onslaught of life-changing events, such as retirement and bereavement, is driving more people to use drink and drugs as a coping mechanism.

The kids are alright, it's the baby boozers that are causing concern 🍷https://t.co/QunCpnlZ2A

​Statistics have revealed that in 2015/16 more than half a million adults aged between 55 and 74 were admitted to British hospitals with alcohol-related injuries, diseases or conditions — more than for any other age group.

The rise of substance misuse in “baby boomers” and why we need new solutions to this growing problem https://t.co/x7YtbknIhq @oldagepsych pic.twitter.com/9jBQGaUYmv

​While excessive drinking is on the wane in the UK and Australia, those in the over 50 age bracket tend to buck the trend.

There are now genuine fears that by 2020 the number of people receiving treatment for substance misuse problems are expected to double in Europe, and treble in the US, among those aged over 50.

"We are looking at the next two decades of real hell in terms of what the future has in store for public health burden and clinical burden," said Dr. Tony Rao, a consultant old age psychiatrist at the Maudsley NHS Foundation Trust.

​Writing in the British Medical Journal ahead of the publication of a forthcoming 2018 report from the Royal College of Psychiatrists, Dr. Rao and Ann Roche — director of the National Centre for Education and Training on Addiction at Flinders University — say more needs to be done to tackle the problem.

However, Dr. Rao warns that the issue goes beyond drinking.

"It is not just a problem in the UK, it is an international problem."

Indeed, the authors write, "In Australia, the largest percentage increase in drug misuse between 2013 and 2016 was among people aged 60 and over, with this age group mainly misusing prescription drugs."

Those over the age of 50, they add, have higher rates of illicit drug misuse, particularly cannabis, than younger Australians.

Dr. Rao believes better integration of healthcare is crucial, stressing those visiting services relating to liver disease or dementia could also be screened for issues relating to alcohol or drugs and be offered help if needed.

Among their suggestions to tackle the problem, the authors argue that programmes should be developed to cater especially for older adults.

"Addiction services [in the UK] are being dismantled piecemeal at the same time as older people are experiencing more substance misuse problems," said Dr. Rao.

Catherine Brown, director of the Institute of Alcohol Studies admitted alcohol consumption among baby boomers is a huge worry.

"This is the first generation of home-drinkers who are far more likely to buy cheap supermarket alcohol than visit their local pub. They are drinking more than their parents and it's no surprise that their health is starting to suffer as a result," she said, adding that price increases and tighter controls on alcohol promotions are needed," Ms. Brown said.

Alcohol labels should display health conditions linked with drinking alcohol, like this one: https://t.co/GD1brBqVNE via @UK_AHA pic.twitter.com/sYSpe9aK6z

​Karen Tyrell, from the alcohol and drug misuse charity Addaction, agreed that better integrated services, as well as those specifically aimed at older adults, are needed to help tackle the issue, pointing out that work from the Drink Wise Age Well project has shown that older adults have different needs to younger people.

"[Older adults'] drinking and drug use tends to be around age-related issues, so things like retirement, bereavement [and] being quite lonely," Ms. Tyrell said.

Ultimately, according to her, the situation among baby boomers is a serious concern. "It tends to be that society imagines that drink and drugs are problems of the young but actually there are massive problems in older populations," she said.