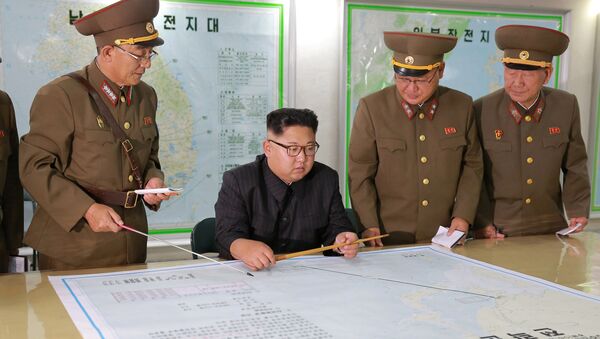 Joint military exercises by the US and South Korea are only "adding fuel to the fire" on the Korean Peninsula, Pyongyang said on Sunday.

The Ulchi Freedom Guardian exercises set to start on Monday, plus the new sanctions on North Korea by the US and the UN, are making things worse instead of easing tensions on the peninsula, the Pyongyang organ Rodong Sinmun said in a Sunday editorial, Yonhap reports.

Indeed, the exercises are "reckless behavior driving the situation into the uncontrollable phase of a nuclear war," Rodong Sinmun warned.

"The joint exercise is the most explicit expression of hostility against us, and no one can guarantee that the exercise won't evolve into actual fighting," the paper warned. "If the United States is lost in a fantasy that war on the peninsula is at somebody else's door far away from them across the Pacific, it is far more mistaken than ever."

At least 75,000 troops will take part in the 10-day war games, a huge-scale, computer-simulated drill designed to help American and South Korean forces practice defending South Korea against an invasion, according to the US Defense Department. Washington insists that the drills are "defensive," but Pyongyang sees them, and military drills that practice taking out North Korean leadership, as provocations.

Pyongyang promised instead a "merciless strike" against US territories in the Pacific or the US mainland in response.

The war of words between US President Donald Trump and North Korean leader Kim Jong-un reached a fever pitch this month, with Trump promising to unload "fire and fury" on the north Asian nation in response to any aggression and North Korean state media responding with reports that Pyongyang had drawn up plans to fire on the US Pacific territory of Guam and was merely awaiting the word from Kim. After much posturing on both sides, however, North Korea announced that Kim had chosen not to activate the Guam attack for the moment.

Not Scaling Back: At Least 75,000 Troops to Join Annual Seoul, US War Games

The US and South Korea were not moved to scale back their annual exercises as a result, though China, an important supporter of North Korea and therefore a very important player in the crisis, suggested a hiatus of the war games in exchange for a testing break.

Other allies will join the exercises this year, including soldiers from Australia, the UK, Canada, Colombia, Denmark, the Netherlands and New Zealand. The exercises will run until August 31.

North Korea tested two intercontinental ballistic missiles in July, and claims its latest missiles can carry a nuclear payload, an assessment some Japanese and US analysts agree with.