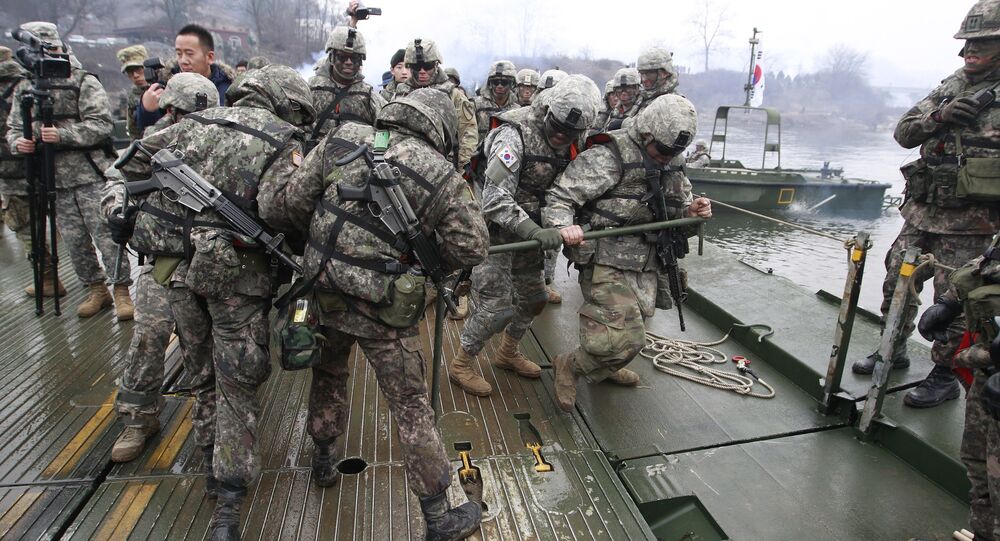 As tens of thousands of US and South Korean military conduct massive war games which deliberately simulate an invasion of North Korea, Gregory Elich speaks with Radio Sputnik’s Loud & Clear to discuss what Washington hopes to accomplish with its provocative drills.

"[The United States] portrays itself as seeking peace," Gregory Elich, member of the advisory board of the Korea Policy Institute, tells Loud & Clear host Brian Becker. "North Korea, on the other hand, has not attacked anyone, and it’s portrayed as being belligerent and threatening.

"[North Korea] realizes that, without a nuclear deterrent, a small country like itself, in the crosshairs of the United States, needs that nuclear deterrent to ward off any possibility of attack."

Last week, the United Nations implemented new sanctions against Pyongyang, the harshest in 20 years, over its recent nuclear tests and satellite launch. In the wake of this action, the United States is now conducting a large-scale military drill alongside South Korea.

"This year will be the largest exercise yet held between South Korea and the United States, and they’re held in the area of the Korean peninsula. So they’re practicing the invasion of North Korea," Elich explains. “This year, for the first time, they’re going to be carrying out a scenario…which calls for a preemptive strike on North Korea and also has plans for what it calls decapitation strikes to kill North Korean leaders.

"This is explicitly intended to threaten North Korea."

US criticism of Pyongyang’s nuclear program is especially hypocritical given Washington’s current efforts to upgrade its own nuclear arsenal, and given similar programs carried out by number of other countries, including US allies.

"I think the United States feels it’s constrained from attacking North Korea in the way it would like to," Elich says. "You can’t really bomb it the same way the United States did with Libya or Yugoslavia. So it’s going to this full court press of sanctions on North Korea, hoping to topple the government that way."

It’s also difficult to justify the US military exercises in light of the fact that similarly provocative drills conducted by the DPRK would be met with outrage.

"Let’s imagine that Russia and Cuba were conducting military exercises on an annual basis in the Caribbean, explicitly practicing the invasion of the United States. The media reaction would be absolutely hysterical and there would be calls for attacking Cuba and Russia.

The DPRK has repeatedly sought peace treaties with the United States, but Washington has rejected these offers.

Washington and Seoul’s joint exercises will take place from March 7 to April 30, and have been roundly criticized by the Russian government as an unnecessary provocation.

"The development of the situation on the Korean peninsula and around it is causing a growing concern," Russia’s Foreign Ministry said in a statement, adding that it is calling on all parties to show restraint.