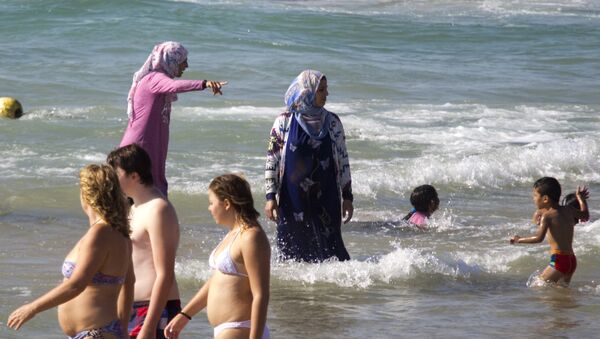 Many beaches and swimming pools in Lebanon have reacted to increasing numbers of women arriving in "burkinis," by banning the swimming suit.

More and more beach-goers in Lebanon have become subject to a restriction on wearing the "burkini," a swimming costume for conservative Muslims that covers a women's body from top to toe.

Burkini sales have soared in recent years as the garment has received attention from the media and the authorities in Europe and elsewhere.

Just Wear It: Nike Launches Sport Hijab For Female Athletes
After the burkini was banned from beaches in several regions of southern France in August 2016, sales of the garment increased several times over, suppliers reported.

Australian designer Aheda Zanetti, who claims the trademark on the name burkini and burqini, told the BBC that online sales were up 200 percent as a result of the furor. 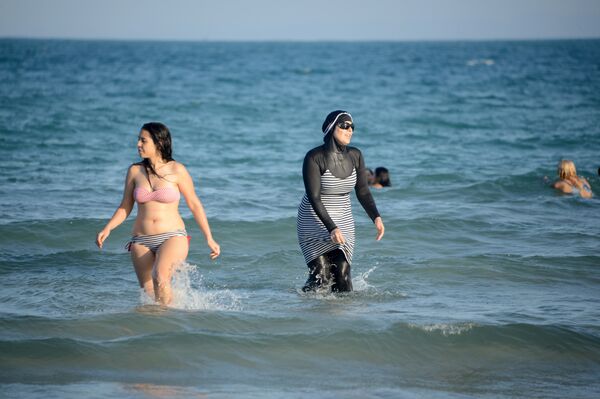 Tunisian women, one (R) wearing a "burkini", a full-body swimsuit designed for Muslim women, swim at Ghar El Melh beach near Bizerte, north-east of the capital Tunis
© AFP 2022 / FETHI BELAID
Recently, the owners of private beaches and swimming pools in Lebanon have ordered swimmers not to wear burkinis. One swimming pool owner told Sputnik Arabic that he banned the costume, explaining that the socially accepted clothing for females to swim in public places is a bikini.

Lebanese sociologist Talal Atrisi told Sputnik that the country is home to diverse cultures which have peacefully co-existed for a long time. A burkini ban on certain beaches doesn't mean that these women are completely prevented from swimming, but rather that they are supposed to visit special women-only beaches or pools. Some owners of public pools and beaches are trying to attract a certain clientele, who might not want to see women in burkinis, the expert explained.

"There is a culture with a conservative Islamic dimension which is manifested in terms of dress and tradition. In contrast, there is another culture that is also relatively conservative but influenced by the western atmosphere," Atrisi said.

"Last year, people began to ask about the 'burkini' and we started selling them in the store. The price of this swimming costume ranged from $70 to $100."

"This year, it is even more popular and more and more stores are selling it, so the price has also fallen accordingly. However, customers who buy 'burkinis' mainly wear them in Egypt, because people on popular beaches in Lebanon are against such clothes. Women in hijabs go to special women's pools," she explained.

Lebanese resident Ola, 32, told Sputnik that while she observed rules on traditional Islamic dress, she is not in favor of burkinis.

"I wear a hijab and think that the 'burkini' is a marketing ploy in order to make money by supposedly facilitating women's trip to ordinary beaches. I prefer special women's beaches," Ola revealed.

Natali, 20, also said she is opposed to burkinis.

"I'm against the 'burkini.' There are special places for women to bathe, where they are free to wear burkinis so why go to mixed pool," she asked.

However, 31-year-old Sara said that she misses out as a result of the burkini ban. When her husband and children are swimming in a pool or on the beach, she keeps her hijab on and watches them from afar.

The Lebanese ban on burkinis comes as female beachgoers in Algeria are also taking a stand against demands that they dress more conservatively. 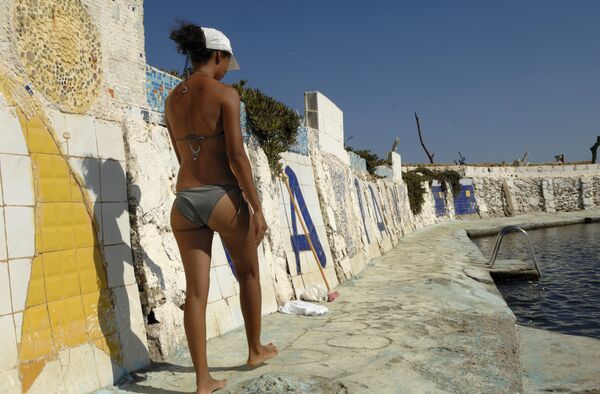 An Algerian woman wearing a bikini walks at the Marina Palm beach club, a private beach resort reserved for women and children, east of the capital Algiers on August 9, 2016
© AFP 2022 / Ryad Kramdi
Recently, some Algerian men disapprovingly posted photos online of women wearing bikinis, calling on them to cover up. In response, women have set up a counter campaign called "bikini revolt," defending their right to wear bikinis. More than 5,000 women have joined a Facebook group in support of the protest since it was set up earlier this summer, France Info reports.
Newsfeed
0
Access to the chat has been blocked for violating the rules . You will be able to participate again through:∞. If you do not agree with the blocking, please use the feedback form
The discussion is closed. You can participate in the discussion within 24 hours after the publication of the article.
To participate in the discussion
log in or register
loader
Chats
Заголовок открываемого материала