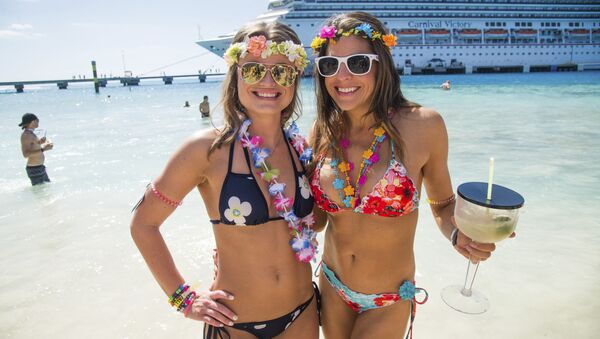 © AP Photo / Amy Harris
Subscribe
International
India
Africa
Saudi Arabia has granted permission for the construction of a high-end Red Sea resort where women born in the kingdom - just like their sisters from around the world - will be permitted to wear bikinis.

The religious fundamentalist kingdom of Saudi Arabia has released a statement that the monarchy will build an expensive and exclusive Red Sea luxury resort where women will be permitted to wear modern swimwear, including bikinis, as opposed to being forced to fully cover their bodies at all times while out of doors.

The announcement is seen as a striking departure from kingdom's legacy of controlling almost every facet of a woman's life, including education, banking, marriage and childbirth, as well as typically requiring that a woman seek the permission of a male relative before leaving the house, and requiring that she cover her entire body while away from home.

Prince Mohammed bin Salman, the new heir to the throne in Riyadh, is thought to be behind the move, coming alongside many cultural and social upgrades in a country that has traditionally been completely dependent on oil exports.

Riyadh, in a statement announcing the construction of the privately-owned and carefully-monitored facility, claimed that it will be "governed by laws on par with international standards," cited by Usatoday.com.

With relaxed visa restrictions, the expensive Saudi vacation hotspot will include some 50 manmade islands, and it is hoped that well-heeled tourists from around the world will also bring their wallets alongside their secular morals.

Remarking on newly-implemented political and business strategies to pull Riyadh out of its longstanding semi-feudal cultural state, diplomat Massoud Maalouf asserted, "It goes without question that Prince Mohammed's Vision 2030 is to […] improve the relatively negative image of the kingdom in the world with regard to treating women."

By the kingdom's current religious fundamentalist law, women with foreign passports may wear western clothing while inside a home, hotel, or compound, but while in public they must cover every square inch of their bodies with the black and shapeless "abaya," a robe-like garment.

Women in the kingdom, whether foreign or native, do not have to cover their faces, Maalouf said.

The kingdom has long been criticized by women's rights groups and many others around the globe for imposing strict codes of behavior, activity, and dress on women — while allowing men free reign in the same arenas.

But those rigid rules describing a woman's life in Saudi Arabia — especially for those who are not among the wealthy — are not likely to change overnight, suggested Maalouf.

"Nothing hints that rules for Saudi women will be relaxed in the near future," he said, adding, "With such rigid rules currently, it is hard to expect quick and radical changes to take place."