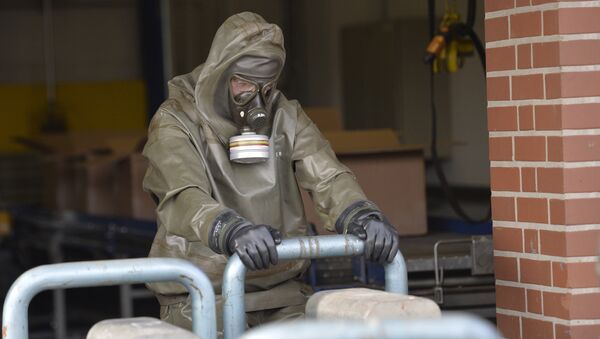 Amid controversy in Germany about the US military's plans to store toxic chemicals there, Igor Shatrov told Sputnik that if the US had large amounts of sparsely populated territory at its disposal in Eastern Europe, somewhere like Ukraine, it would almost certainly store its hazardous materials there instead.

Germans in Uproar Over US Military's Plans to Expand Toxic Chemical Warehouse
The US military's planned expansion of a toxic chemical warehouse in Germany is being met with opposition from local residents, who are afraid of the associated health and safety risks.

The warehouse is located on the outskirts of Germersheim, a town of 20,000 inhabitants in the state of Rhineland-Palatinate.

Since 2013, the warehouse has provided US forces operating across Europe with chemicals such as fuel additives and de-icing agents. The US army plans to increase its capacity 27-fold, from its current 70 metric ton to 1,900 tons.

According to the plans, the warehouse will provide US forces not only with lubricants and oils needed for transport vehicles, but with 50 metric tons of the most hazardous chemicals, including cadmium fluoride and dimethyl sulphate. The latter compound is a potential chemical weapon and was used in the trenches during the First World War.

Organizers of a campaign against the expansion of the warehouse have collected over 1,000 signatures for a petition against the project, citing concerns about the risk of poisoning from hazardous substances in the event of an accident.

'Who Will We Blame For Genocide Then?' Ukraine's Depopulation Gets Poles Anxious
Last week, local officials told Sputnik Deutschland that they had already received almost 40 formal complaints from residents about the plans.

Igor Shatrov, director of the National Institute of Modern Ideology Development, told Radio Sputnik that the US needn’t have tried to construct such a large warehouse in Western Europe, where the plan is sure to raise opposition, as it had some alternatives in the East.

"If, for example, Ukraine was a NATO member, then they would probably prefer to store it in Ukraine. In that case they wouldn't provoke the Germans, after all, they [the US] consider them to be allies and partners."

"But at the moment, Germany has the largest territory of all the European members of NATO and US troops are literally all over. They have built infrastructure, starting from the immediate aftermath of World War Two, which is very broad and diverse."

Shatrov believes that over time, the US military will try to move its dangerous materials from Western to Eastern Europe.

"After all, [Western] Europe is a fairly densely populated region. Therefore, Ukraine would be interesting for them [the US military], where there is also a lot of territory but it isn't so densely populated. In fact, this is the plan. The Ukrainians now have to think about their fate, and what will happen to them when they become too closely aligned with NATO and the United States. The Germans defend their rights, but that will be more difficult for the Ukrainians," Shatrov warned.