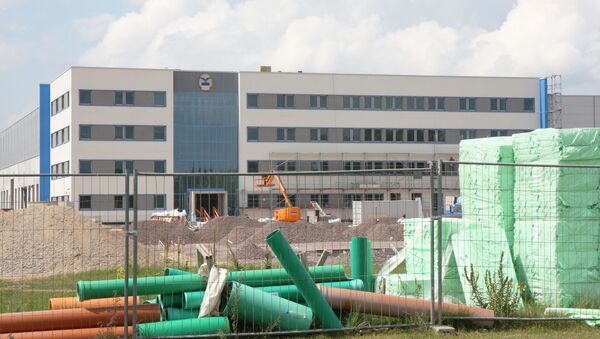 Residents of the Palatinate region of southwest Germany are protesting the expansion of the US military's chemical storage facility there, amid fears for the health and safety of local people.

'Moral Blow' to Germany: Poland's Prospects to Get Reparations for Nazi Actions
Residents of the Palatinate region of southwest Germany are fighting to prevent the expansion of a US Army Europe hazardous chemical storage facility, which would make it the US military's largest warehouse of its kind in Europe.

Since 2013, the warehouse has provided US forces operating across Europe with chemicals such as fuel additives and de-icing agents. The US army plans to increase its capacity 27-fold – from 70 tons at the moment, to 1,900 tons. According to the plans, the warehouse will provide US forces not only with lubricants and oils, but with 50 tons of the most hazardous chemicals.

The Germersheim Army Depot is located on the outskirts of Germersheim, a town of 20,000 inhabitants in the state of Rhineland-Palatinate.

The US military's Defense Logistics Agency has lodged an application for planning permission with the district authorities of Germersheim.  However, the application lists only the class to which the toxic substances belong and not the actual names of the chemicals. Local residents are anxious to find out exactly what is going to be stored there and the damage the substances could do.

The local planning office made the application available for residents to read for four weeks, after which they had two weeks to file any objections to the plans. Last week, local officials told Sputnik Deutschland that they had already received almost 40 complaints – the two-week period is due to expire August 7.

Michael Gauly, Director of the Department of Building, Environment, Waste Management at the district administration of Germersheim, told Sputnik that most of the objections relate to health and safety concerns.

"The objections relate mainly to the storage of hazardous substances and to the possibility of [chemical] reactions in the event of an accident," Gauly said.

"Even if many substances are classed as less dangerous, it is still unclear how the substances would react in the event of a possible accident and contact with one another," he warned.

Fatal Attraction: What Drives Young German Women Into the Arms of Daesh?
In its application, the US Defense Logistics Agency has revealed the "representative substances" it intends to store from each group, but critics of the plan suspect that the military intends to store more unusual chemicals, which could be used for more than simple logistical purposes.

For example, two of the highly toxic substances listed in the planning application are cadmium fluoride and dimethyl sulphate. The latter compound is a potential chemical weapon and was used in the trenches during the First World War.

Objections have also been raised about whether the warehouse adheres to Germany's Prohibition of Chemicals Ordinance, which was revised in March.

"This is an interesting question, since military installations are actually excluded from the Prohibition of Chemicals Ordinance. We have forwarded this to the Bundeswehr's Office for Infrastructure, Environmental Protection and Services for examination. The result of this review will be used as a basis for further assessment," Gauly said.

Around 200 trucks will arrive at the facility every day, the US military predicts. Trucks carrying dangerous substances will travel along federal highways and local roads, and residents are worried about the risks of a chemical spill if one of them has an accident.

Where German Gold Is Stored and How to Bring It Back to the Country
Matthias Joa, a deputy in the Rhineland-Palatinate state parliament who represents Alternative for Germany, is doubtful that such a large expansion of the warehouse can be made safe for local people.

"I have my doubts that the US Army fire brigade and the local fire brigade, which would not be expanded, could deal with a 27-fold enlargement of the depot's storage capacities in the event of an accident. In particular, if they do not know exactly what is stored there," Joa said.

Joa supported calls for the state parliament and federal Ministries of Environment and Defense to debate the proposal.

"The citizens' initiative has shown that various procedures have not been respected. For example, no environmental impact assessment has been carried out. We don't think this is right. In addition, the application documents are very complex, and an independent expert should be appointed at least. We also think it is wrong to take a decision at the municipal level and would like to discuss this at the state level," Joa said.

So far, the organizers of the campaign against the expansion of the warehouse have collected over 1,000 signatures for a petition against the project.

Frank Leibeck, mayor of the Lingenfeld administrative district which is close to the planned warehouse, said that he shares the concerns of local people.

"Citizens' initiatives to get more transparency and information are always welcome. I think it's a good thing if this contributes to the decision-making process. The citizens' initiative does not want the warehouse to be expanded. If this is the decision made at the end of the process, then that is OK from my point of view. The council of the administrative district Lingenfeld has stated its negative opinion on the subject of the expansion of the depot because we do not have enough information about it," Leibeck said.