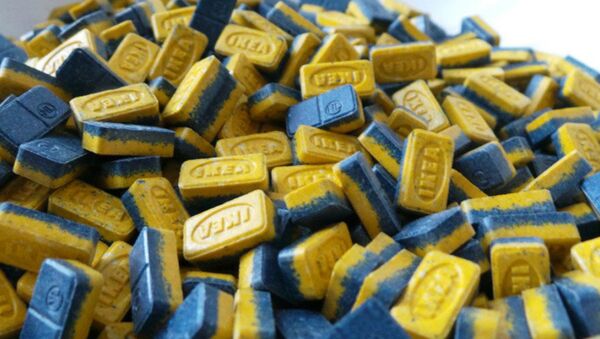 © Photo : Highsnobiety / twitter
Subscribe
Recently, a new batch of super-potent ecstasy has arrived in Europe; the flashy blue-yellow tablets bear an Ikea logo and have been associated with a number of overdose cases. Ironically, the new killer pills have only been recently encountered in Sweden itself, the country that spawned Ikea the furniture giant.

French Luxury Brand Offers $2,145 Clone of Ikea's 99 Cent Shopping Bag
In the Channel Island of Jersey, police warned that the super-potent pills were much stronger that ordinary ecstasy that is commonly sold on the black market. An 18-year-old man who died on Saturday morning is suspected to have taken Ikea-labeled ecstasy.

"This is completely unacceptable and Ikea has nothing to do with it," an enraged Emil Eriksson from Ikea's press department told Swedish national broadcaster SVT.

Analysis carried out in the UK and the Netherlands revealed that the new tablets may contain twice the ordinary dose of the active substance MDMA.

"Usually, 75 to 100mg is considered to be a normal dose. The tablets encountered on the UK market may contain up to 200mg of MDMA," physician Erik Lindeman of the Poison Information Center told SVT.

No similar tests have been carried out so far in Sweden, but the case is unusual in that most fatalities related to club drugs involve pills that contain other active substances that mimic the effects of MDMA. Since most of the MDMA sold in Sweden comes from Holland, Erik Lindeman forecasts a rise in stronger tablets as well.

​Last week, the Stockholm Police came out with a warning of a stronger variant of ecstasy in circulation. The warning was published after a woman died and a number of people sought emergency help in connection with an outdoor drug party. Although the police could not establish a clear link between more potent ecstasy and the overdose, a warning about tablets going under the name of Don Perignon was issued.

"We don't know the habits of these girls, but you should not get this kind of reaction with a normal dose," Annika Ljung of the Stockholm Police said about the incident. According to Vice, while the CDC recorded 52,404 drug-related deaths in the US in 2015 (prescription and otherwise), MDMA only accounted for an estimated 50 of these.

#InstaGun: Swedish Police Powerless to Stop Social Network Black Market
According to Lindeman, MDMA releases stimulant substances into the brain, which leads to a feeling of excitement and increased alertness, which is often described as "togetherness with the cosmos."

An MDMA overdose leads to an increased body temperature, high blood pressure and an increase in the risk of a heart attack. The leading cause of MDMA-related deaths is believed to be complications from heat stroke. In addition to this, MDMA intake is closely associated with another risk due to a popular misconception, as people erroneously believe it's possible to keep from overheating by drinking copious amounts of water.

"We see many such patients in Sweden. People who within several hours drink 5 to 6 liters of water and develop water poisoning symptoms," Erik Lindeman said, explaining that MDMA impedes the kidneys' ability to secrete water, which, in turn, may cause brain swelling, especially in women, due to a dangerous combination with the estrogen hormone. "There has been quite a large number of deaths among young women associated with water poisoning," Erik Lindeman said.

Another problem associated with ecstasy intake is that the exact amount of the active substance is difficult to predict and is somewhat of a lottery.

000000
Popular comments
it does open up interesting naming possibilities; nato eu dc isis the list would be almost endless. :)
michael
22 June 2017, 11:47 GMT
000000
It is time for the Western leaders to either start producing positive results or step down and let someone else do it. The pretend that they can't do anything about it. I don't believe it.
jas
22 June 2017, 12:44 GMT
000000
Newsfeed
0
New firstOld first
loader
LIVE
Заголовок открываемого материала
Access to the chat has been blocked for violating the rules . You will be able to participate again through:∞. If you do not agree with the blocking, please use the feedback form
The discussion is closed. You can participate in the discussion within 24 hours after the publication of the article.
To participate in the discussion
log in or register
loader
Chats
Заголовок открываемого материала
Worldwide
InternationalEnglishEnglishMundoEspañolSpanish
Europe
DeutschlandDeutschGermanFranceFrançaisFrenchΕλλάδαΕλληνικάGreekItaliaItalianoItalianČeská republikaČeštinaCzechPolskaPolskiPolishСрбиjаСрпскиSerbianLatvijaLatviešuLatvianLietuvaLietuviųLithuanianMoldovaMoldoveneascăMoldavianБеларусьБеларускiBelarusian
Transcaucasia
ԱրմենիաՀայերենArmenianАҧсныАҧсышәалаAbkhazХуссар ИрыстонИронауОssetianსაქართველოქართულიGeorgianAzərbaycanАzərbaycancaAzerbaijani
Middle East
Sputnik عربيArabicArabicTürkiyeTürkçeTurkishSputnik ایرانPersianPersianSputnik افغانستانDariDari
Central Asia
ҚазақстанҚазақ тіліKazakhКыргызстанКыргызчаKyrgyzOʻzbekistonЎзбекчаUzbekТоҷикистонТоҷикӣTajik
East & Southeast Asia
Việt NamTiếng ViệtVietnamese日本日本語Japanese俄罗斯卫星通讯社中文（简体）Chinese (simplified)俄罗斯卫星通讯社中文（繁体）Chinese (traditional)
South America
BrasilPortuguêsPortuguese
NewsfeedBreaking
06:42 GMTFormer Islamist Preacher: 'There is a Salafist in Every Swedish Mosque'
06:33 GMTAlgeria Closes Airspace to All Planes From Morocco Over 'Provocations'
06:28 GMTRussia Ready to Cooperate With New German Gov't Based on Mutual Respect, Ambassador Says
05:29 GMTUS Sanctions Suffocating Syrian People, International Community Must Act, Foreign Minister Says
05:09 GMTLebanese Public Hopes New Gov't Will Tackle Economic Crisis, But What are the Odds It'll Succeed?
04:32 GMTIndian Scientists' Experiment May Solve Treatment Puzzles of Neurological Disorders Like Alzheimer's
04:31 GMTModi Arrives for Visit in Washington, Welcomed by Diaspora, Foreign Ministry Says
04:30 GMTDon't Do That! Shiba Inu Worried Its Cat Buddy May Get Hurt
04:15 GMTLive Updates: India Records 31,923 COVID-19 Cases Over Past 24 Hours
04:09 GMTPhoto: Armored Vehicles, National Guard Appear on Texas Border Amid Abbott's 'Steel Wall' Deployment
03:58 GMTBannon Admits He Spoke With Trump About 'Killing' Biden Presidency Ahead of Deadly Capitol Riot
03:00 GMTWreckage of Disappeared An-26 Plane Found in Russia's Khabarovsk Territory - Source
02:20 GMTLavrov Holds 1st Meeting With Truss in New York Amid New UK Accusations in Skripal Case
01:49 GMTDHS Looks to Staff Gitmo Migrant Facility With Guards Who Speak Haitian Creole Amid US Border Surge
01:30 GMTRussian Crew Leaves Boat Pilgrim in Alaska, Will Renew World Trip Next Spring - Captain
01:00 GMTWall Street Up Broadly as Fed Signals Caution With US Stimulus Taper, Rate Hike
00:45 GMT‘This Moment Demands Action’: Biden Eyes Executive Actions After Fruitless Police Reform Talks
00:26 GMTMoroccan Liberal Parties Form Coalition Government, Ousting Islamists After Decade of Rule
00:00 GMTIAEA Must Have Access to Nuclear Fuel for Australian Submarines - Iranian Envoy
YesterdayFDA Authorizes Pfizer Booster Shots for Elderly, At-Risk Americans