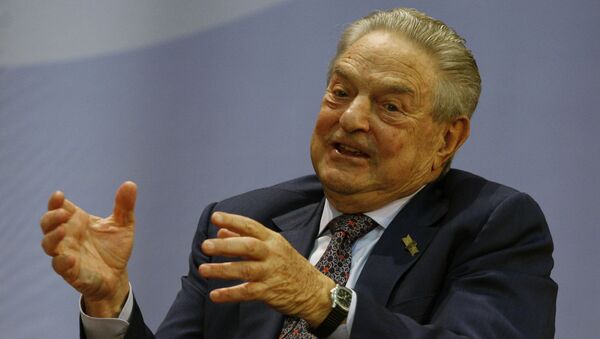 © AP Photo / Kin Cheung
Subscribe
The newly imposed US sanctions against Russia are designed to complicate bilateral ties between Moscow and Washington, Thierry Mariani, a member from the French center-right The Republicans party and co-president of the Franco-Russian Dialogue Association, told Sputnik on Tuesday.

MOSCOW (Sputnik) — Earlier in the day, the US Department of the Treasury Office of Foreign Assets Control (OFAC) introduced sanctions against some 40 individuals and entities over their alleged involvement in the ongoing conflict in eastern Ukraine. The list of those under the new sanctions includes several high-ranking Crimean officials and Russian Special Presidential Representative for Cooperation with Organizations Representing Russians Living Abroad Alexander Babakov, as well as the PMC Wagner private military company, three banks operating in the self-proclaimed Donetsk and Lugansk People’s Republics and six banks operating in Crimea.

"They continue on that dead-end road. The previous wave of sanctions achieved absolutely no results, and clearly, new sanctions will have the same effect. The only goal for this is to have more tension and complicate relations between America and Russia," Mariani said.

The lawmaker added that he was "a bit disappointed," as he was expecting changes in US policies under President Donald Trump.

"In fact, the same politics prevail. I believe that political and economic elite behind Senator [John] McCain and [billionaire George] Soros are pushing for that," Mariani said.

US Supports Ukraine's Pro-War Factions by Expanding Sanctions – Moscow
The Department of the Treasury’s move comes after the US Senate on Wednesday voted in favor of extending sanctions against Russia over its alleged meddling in the 2016 US presidential election. Kremlin spokesman Dmitry Peskov said that Russia seeks to avoid a "pique of sanctions" in response to the US Senate's newly proposed sanctions against Russia but called for patience until the measures are codified. The Russian Foreign Ministry said it regrets the sanctions but stressed that Russian policies will remain unaffected.

During his election campaign in 2016, Trump announced he "would be looking" into lifting the sanctions against Russia and recognizing Crimea as a Russian territory.

000000
Popular comments
Well... uh... who could these mysterious people be ... errrr...apparently no one knows them ... "elites" ? for sure they must occupy some very special place in the society, that they can by pass the president... ...
Marques rouges
20 June 2017, 21:33 GMT
000000
Trump a worse liar than Obama, the puppet masters have got their hands up him.
jj42
20 June 2017, 21:37 GMT
000000
Newsfeed
0
New firstOld first
loader
LIVE
Заголовок открываемого материала
Access to the chat has been blocked for violating the rules . You will be able to participate again through:∞. If you do not agree with the blocking, please use the feedback form
The discussion is closed. You can participate in the discussion within 24 hours after the publication of the article.
To participate in the discussion
log in or register
loader
Chats
Заголовок открываемого материала
Worldwide
InternationalEnglishEnglishMundoEspañolSpanish
Europe
DeutschlandDeutschGermanFranceFrançaisFrenchΕλλάδαΕλληνικάGreekItaliaItalianoItalianČeská republikaČeštinaCzechPolskaPolskiPolishСрбиjаСрпскиSerbianLatvijaLatviešuLatvianLietuvaLietuviųLithuanianMoldovaMoldoveneascăMoldavianБеларусьБеларускiBelarusian
Transcaucasia
ԱրմենիաՀայերենArmenianАҧсныАҧсышәалаAbkhazХуссар ИрыстонИронауОssetianსაქართველოქართულიGeorgianAzərbaycanАzərbaycancaAzerbaijani
Middle East
Sputnik عربيArabicArabicTürkiyeTürkçeTurkishSputnik ایرانPersianPersianSputnik افغانستانDariDari
Central Asia
ҚазақстанҚазақ тіліKazakhКыргызстанКыргызчаKyrgyzOʻzbekistonЎзбекчаUzbekТоҷикистонТоҷикӣTajik
East & Southeast Asia
Việt NamTiếng ViệtVietnamese日本日本語Japanese中国中文Chinese
South America
BrasilPortuguêsPortuguese
NewsfeedBreaking
12:04 GMTTeen With Lego Gun Triggers Police Operation in German Town
12:01 GMTMachete-Wielding Man Injures Four People in Canada's Calgary
11:38 GMTRussian Deputy Prime Minister Not Ruling Out Repetition of Energy Crisis in Europe
11:24 GMTNorth Korean Website Slams 'Squid Game' as Showing 'Hell-Like Horror Where Only Money Matters'
11:07 GMTDeath Toll From Kandahar Mosque Bombing Rises to 63
11:02 GMTFrench Politician: US Has Moral and Legal Obligation to Unblock Afghan Assets & Let the Nation Be
10:59 GMT‘Killed Serving the People’: UK Media Shows Rare Display of Cross-Party Unity in Tribute to Dead MP
10:50 GMTIs Russia in Danger of Running Out of Gold Deposits?
09:08 GMTUS-Greek Bases Pact Signals Bid to Pressure Turkey, Dominate East Mediterranean
09:02 GMTAustrians Invited to Presidential Palace for COVID-19 Shots
09:00 GMTNASA's Lucy Mission Blasts Off to Examine Trojan Asteroids
09:00 GMTPremier League: Five Biggest Games of Matchweek Eight
08:55 GMTUK Police Ordered to Immediately Review MPs' Security Arrangements After Fatal David Amess Stabbing
08:30 GMTSeveral Dead and Dozens Injured: What Was Behind Thursday's Bloody Events in Lebanon?
07:33 GMTISS Crew Was Woken Up by Siren at Night
07:16 GMTAnother Day, Another Blunder: Psaki to ‘Choose Words More Carefully’ After Ethics Watchdog Complaint
07:12 GMTNetflix Fires Organiser of Trans Employee Walkout for Leaking Internal Documents, Reports Say
06:08 GMTFour Indian Paramilitary Personnel Injured in Blast at Raipur Railway Station
05:59 GMTBiden Admits He Will Have to 'Build Back Better' With Less, Is ‘Not Going to Get $3.5 Trillion’
05:45 GMT‘Sensational’ Remains Buried by Ancient Vesuvius Eruption Discovered at Herculaneum