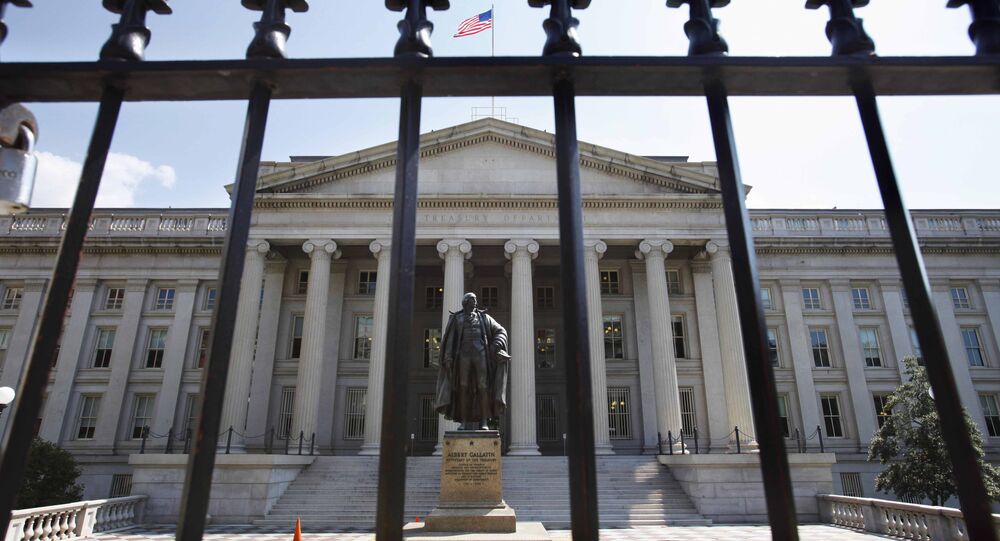 The new US sanctions against Russia were announced during Ukrainian President Petro Poroshenko’s working visit to Washington, D.C. where he is set to meet US President Donald Trump and other administration officials, including Defense Secretary James Mattis.

WASHINGTON (Sputnik) — The US Treasury Department Office of Foreign Assets Control (OFAC) announced on Tuesday a new round of sanctions against 38 individuals and entities over the ongoing conflict in Eastern Ukraine.

The sanctions were announced during Ukrainian President Petro Poroshenko’s working visit to Washington, D.C. where he is set to meet US President Donald Trump and other administration officials, including Defense Secretary James Mattis.

"These designations will maintain pressure on Russia to work toward a diplomatic solution," Treasury Secretary Steven Mnuchin stated in a press release. "This administration is committed to a diplomatic process that guarantees Ukrainian sovereignty, and there should be no sanctions relief until Russia meets its obligations under the Minsk agreements."

Sanctions freeze all of the individuals’ and entities assets subject to US jurisdiction and generally prohibit US persons from doing business with them.

In the release, the Treasury Department said the new measures were "designed to counter attempts to circumvent US sanctions" and aligned "with those of our international partners."

The Treasury Department stressed that Ukraine-related sanctions would remain in place until the Minsk Agreements are implemented, and the Crimea sanctions until Kiev takes possession of the peninsula.

Among the designated individuals and entities are six that are alleged to provide material or other support to Russia’s arms sector or the Russian government: Molot-Oruzhie, OOO; Limited Liability Company Concord Management and Consulting; Concord Catering; Alexander Babakov; Aleksandr Vorobev; and Mikhail Plisyuk.

"Babakov was sanctioned in 2014 by the EU, which noted that he voted ‘yes’ on a Russian bill for the annexation of Crimea," the release said.

Vorobev, Babakov’s Chief of Staff, and Plisyuk, a staff member, were designated for directly or indirectly acting on his behalf.

Prigozhin was sanctioned in December.

The Treasury Department said their designations were "part of an ongoing effort to hold those responsible for violations of Ukraine’s sovereignty and territorial integrity accountable for their actions."

The Treasury Department said the three officials threatened the "peace, security, stability, sovereignty, or territorial integrity of Ukraine," nothing that the Council of Ministers under Khorsheva adopted a resolution to use the Russian Ruble as LPR’s primary currency, while Kornet previously announced the LPR Interior Ministry would issue passports to its residents.

© Sputnik / Sergey Guneev
Sanction Them All! Kiev Wants US to 'Punish' Allies Over Nord Stream 2 Pipeline Project
Pasechnik, the Treasury Department claimed, has been involved in smuggling arms, fuel, coal and other materials between LPR and Russia.

DPR Central Bank Chairwoman Irina Nikitina was sanctioned, with the Treasury Department noting she has announced a system to allow residents of DPR and LPR transfer money to each other.

BANKS IN CRIMEA, LPR AND DPR

Banks in the self-declared republics were targeted, with sanctions imposed on the LPR and DPR central banks, a Russian bank that does business in the People’s Republics, and six Crimean banks.

© CC BY 2.0 / Kmccoy / United States Capitol
Austria Slams US' 'Extremely Disappointing' Decision on New Anti-Russia Sanctions
The TSMRBANK, a Russian bank with clients in the DPR and LPR, was also sanctioned.

Also sanctioned were the Riviera Sunrise Resort & Spa hotel in Crimea and IFD Kapital, the diversified holding company that owns it, as well as IFK Kapital chairperson Olga Plaksina.

Insurance carrier KPSK, OOO and Oboronlogistika, OOO, which owns maritime vessels around the Kerch kerry and Baltic Sea, were sanctioned for operating in Crimea.

Among the measures in the Minsk Agreements are the de-escalation of the armed conflict in Eastern Ukraine.

The Treasury Department on Tuesday targeted groups it said were linked to the ongoing fighting in the area.

PMC Wager, a private military company based in Russia, was sanctioned, as was its founder Dmitriy Utkin.

OFAC charged the company "has recruited and sent soldiers to fight alongside separatists in eastern Ukraine."

Ryauzov is the company’s "combat trainer leader," according to OFAC, and Bike Center is owned by Aleksandr Zaldostanov, leader of the Night Wolves.

Shortly after the sanctions were announced, the White House said in a press release Trump and Poroshenko had met to discuss the support for the end of the conflict in Eastern Ukraine.

Commenting on Poroshenko's visit, Kremlin spokesman Dmitry Peskov said earlier Tuesday that Russia hopes the conversation between the two leaders would send a signal to Kiev in favor of the need to implement the Minsk agreements.

Russia Regrets Expansion of US Sanctions, Works on Response