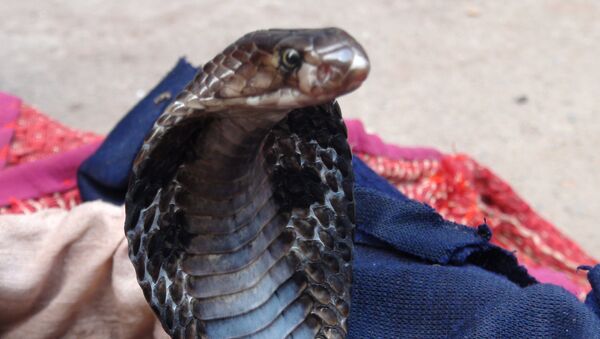 © Photo : Sandeep Kumar
Subscribe
A video has surfaced online of a king cobra that snuck its way into a Malaysian home and scared the residents out of their boots.

The video, uploaded by Derrick YiFan, shows the snake slipping through a shoe rack before slithering to the door and entangling itself in a metal grate inside. The eight-foot cobra seemed totally disinterested in the human, but the opposite was not true as residents screamed and cursed.

"I thought this was just a science fiction thing! I can't believe I saw that big snake with my own eyes!" Derrick wrote on Facebook.

The incident occurred in the Batu Pahat District of Johor State on Sunday afternoon. The snake slipped away without being captured, according to Derrick. "The Bomba [Fire and Rescue Department of Malaysia] came to the scene and didn't find it," he wrote, adding that he was worried the cobra might return. "It's probably out the back window."

"I don't know when the dragon will come again," he ominously concluded.

Despite its name, the king cobra is not a "true" cobra, but instead the last surviving species of its own genus, more closely related to African snakes than fellow Asian cobras. The "king" name comes from their impressive size (they are the largest venomous snake in the world,) as well as their favorite food: other snakes, including "true cobras."

They average 10 to 13 feet in length, making the one Derrick saw either a juvenile or a shrimp. Although not aggressive in nature, preferring to run from threats, the king cobra's bite contains a fatal dose of venomous neurotoxin that makes it more fatal than other cobras.