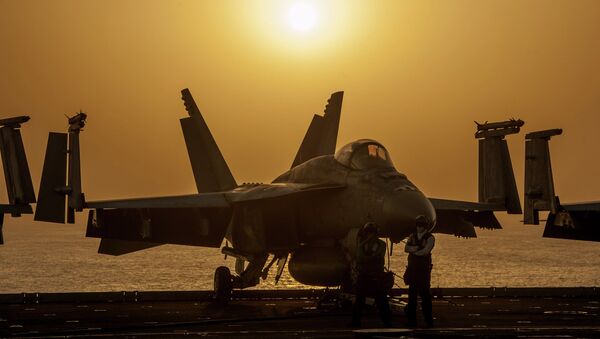 © Photo : US Department of Defense / John Philip Wagner Jr.
Subscribe
International
India
Africa
The Russian Defense Ministry slammed the "cynical" US aviation attack in Syrian airspace, which may be considered an "act of aggression."

What We Know So Far About US Coalition's Downing of Syrian Jet in Raqqa
On June 18, the Syrian army said that the US-led coalition had brought down its aircraft in southern Raqqa countryside when it was fulfilling its mission against Daesh.

"The repeated hostilities of US aviation against the legitimate armed forces of a UN member state under the guise of 'combating terrorism' are a gross violation of the international law and de facto a military aggression against the Syrian Arab Republic."

US-Backed Rebels Vow to 'Retaliate' if Syrian Army Attacks Positions in Raqqa
The Russian Defense Ministry said that the US F-18A fighter jet downed the Syrian Air Force's Su-22 launching an air-to-air missile. The ministry added that the Syrian jet was supporting the Syrian army's units which were conducting an offensive against Daesh terrorists near a populated area located some 40 kilometers south-west of the city of Raqqa.

"As a result of the strike, the Syrian jet was destroyed. The pilot of the Syrian Air Force's Su-22 ejected over an area controlled by Daesh terrorists. His fate is unknown."

In response to the attack, Russia decided to halt all interactions with the US within the framework on the memorandum of incident prevention over Syria.