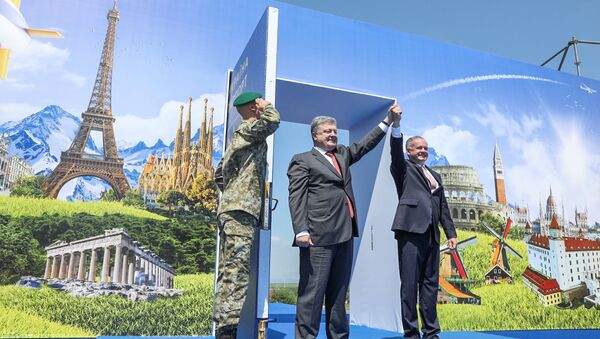 © REUTERS / Mikhail Palinchak
Subscribe
On Sunday, Ukraine's long-awaited visa-free travel arrangement with the EU entered into force, prompting President Petro Poroshenko to harp on about Ukraine's Russia-free future. However, Ukrainian politics expert Bogdan Bezpalko says Poroshenko should have taken a look at the experience of neighboring Moldova before getting too excited.

Speaking at a special ceremony at the Ukrainian-Slovak border Sunday, President Poroshenko said that the introduction of a visa-free regime with the EU was the final lifting of a "paper curtain" separating Ukraine from Europe. It was symbolic, he said, that the visa-free regime was being enacted on the eve of June 12, a holiday commemorating Russia's independence and sovereignty.

"We [Ukraine and Russia] finally became independent from each other, including politically, economically, energetically and mentally," Poroshenko said. To drive the point home, the president made the odd, perhaps deliberately provocative choice of quoting Russian poets Mikhail Lermontov and Alexander Pushkin, including a quote from the former's poem "Farewell, Unwashed Russia," and the latter's "To Chaadayev."

Poroshenko's Claims on Ukraine 'Independent From Russia' Shattered by Reality
Speaking to RIA Novosti, Bogdan Bezpalko, Ukrainian politics expert and deputy director of the Center for Ukrainian and Belarusian Studies at Moscow State University, commented that the Ukrainian president's odd choice of words, even if driven by a desire to hurt Russia, actually demonstrates just how deeply Ukraine and Russia remain linked in terms of culture, language, and mentality.

As for the visa-free regime itself, Bezpalko emphasized that it was much too early for Ukraine to celebrate.

The analyst recalled that tiny Moldova, Ukraine's southwestern neighbor, has enjoyed a visa-free travel regime with EU countries since 2014, but this has not improved the political or socio-economic situation in the country in any visible way.

"Moldova has had this kind of visa-free regime for a long time, but it never did become a driver for the Moldovan economy. Moldova is more dependent on remittances from citizens working abroad than Tajikistan," Bezpalko said. Remittances, predominantly from workers in Russia, are presently estimated to account for nearly 20% of Moldova's GDP.

'Depopulation': Why People Are Fleeing Ukraine at Steady Pace
In Ukraine's case, the expert suggested that Poroshenko is "playing for his audience and trying to present the visa-free agreement as his great achievement." This only makes sense, Bezpalko noted, because in over three years since stepping into office, the president had had few if any real accomplishments to boast about. The national economy is in shambles, the country faces ongoing political instability, its patron-client relationship with Brussels and Washington is threatened, and the ongoing civil war in Ukraine's southeast seems to have no end in sight.

Furthermore, with 80% of Ukrainians earning less than $5 a day, and about 1.9 million (or 9.5% of the working population) suffering unemployment, it seems doubtful that many Ukrainian nationals will be able to actually take advantage of their new-found freedom of travel to Europe.

Since June 11, Ukrainian citizens with biometric passports have been able to enter Schengen Area countries (including most of continental Europe but excluding the UK and Ireland) for a period up to 90 days during any 180-day period.

Migrant Crisis Part II: EU Braces for Flood of Illegal Ukrainian Migrant Workers
When entering, Ukrainians may be required to produce a return ticket, proof of a hotel reservation, medical insurance and proof that they have at least 45 euros for each day they plan to spend in Schengen Area. EU states reserve the right to reinstate visa requirements in the event of any security concerns, or if Ukraine fails to cooperate in taking back illegal immigrants.

In recent weeks, some EU members have grown jittery about the prospects of a flood of Ukrainian illegal migrant workers finding ways to abuse the visa-free arrangements to come and work in their countries.

000000
Popular comments
I guess he has not noticed that the borders of Ukraine and Russia have never been ratified, in accordance with International Law, since the fall of the Soviet Union, back in 1991. When are they going to notice?
anne00marie
12 June 2017, 15:16 GMT3
000000
This is a free choice of the Ukrainian peoples still liveing under Poroshenko's rule (the western parts of Ukraine) and should be respected but not in any way subsidized by Russia, Russians or any other peoples in the still free non-western world. It is important to not that choices are free but also that consequences (no matter how impalatable) are inescapable.
gbiyanju
12 June 2017, 14:40 GMT2
000000
Newsfeed
0
New firstOld first
loader
LIVE
Заголовок открываемого материала
Access to the chat has been blocked for violating the rules . You will be able to participate again through:∞. If you do not agree with the blocking, please use the feedback form
The discussion is closed. You can participate in the discussion within 24 hours after the publication of the article.
To participate in the discussion
log in or register
loader
Chats
Заголовок открываемого материала
Worldwide
InternationalEnglishEnglishMundoEspañolSpanish
Europe
DeutschlandDeutschGermanFranceFrançaisFrenchΕλλάδαΕλληνικάGreekItaliaItalianoItalianČeská republikaČeštinaCzechPolskaPolskiPolishСрбиjаСрпскиSerbianLatvijaLatviešuLatvianLietuvaLietuviųLithuanianMoldovaMoldoveneascăMoldavianБеларусьБеларускiBelarusian
Transcaucasia
ԱրմենիաՀայերենArmenianАҧсныАҧсышәалаAbkhazХуссар ИрыстонИронауОssetianსაქართველოქართულიGeorgianAzərbaycanАzərbaycancaAzerbaijani
Middle East
Sputnik عربيArabicArabicTürkiyeTürkçeTurkishSputnik ایرانPersianPersianSputnik افغانستانDariDari
Central Asia
ҚазақстанҚазақ тіліKazakhКыргызстанКыргызчаKyrgyzOʻzbekistonЎзбекчаUzbekТоҷикистонТоҷикӣTajik
East & Southeast Asia
Việt NamTiếng ViệtVietnamese日本日本語Japanese俄罗斯卫星通讯社中文（简体）Chinese (simplified)俄罗斯卫星通讯社中文（繁体）Chinese (traditional)
South America
BrasilPortuguêsPortuguese
NewsfeedBreaking
11:10 GMTUS 'Era of War Over'?
11:07 GMTPandemic Times: India's Healthcare Adopts Cloud Computing, 12 Mln Consultations Clocked
10:55 GMTAll Participants of Sudan Coup Detained, Will Stand Trial, Deputy Foreign Minister Says
10:51 GMTDonald Trump Sues NYT, Niece Mary Over ‘Insidious Plot’ Behind 2018 ‘Dubious Tax Schemes’ Story
10:48 GMTDriver of Zelensky's Aide Shefir Undergoing Leg Surgery, Report Says
10:34 GMTKremlin Regrets Erdogan's Claims About Crimea's 'Annexation' on Eve of Sochi Summit
10:18 GMTThe Truckers' Friend: UK Transport Secretary Takes Action to Protect M25 Motorway From Demonstrators
10:15 GMTStrong 6.5-Magnitude Earthquake Strikes Near Coast of Nicaragua
10:14 GMTHollywood Bids Farewell to Sex and the City Star, Dead at Age 57
09:58 GMTRussian An-26 Plane With 6 People Onboard Disappears From Radar in Khabarovsk Region
09:49 GMT'Hardest Decision of My Life': Uma Thurman Opens Up About Her 'Darkest Secret'
09:18 GMTZuckerberg Reportedly Approved Using News Feed to Push Pro-Facebook Coverage in Image-Reshaping Bid
08:59 GMTPakistan Wants to Help Train Afghan Security Forces, Ambassador Says
08:52 GMTMadhya Pradesh Couple, Young Girl Forced to Dance With Bike Tyres Around Their Necks For Elopement
08:52 GMT2,500 Rhino Horns Torched in Indian State of Assam to Convey Anti-Poaching Message
08:23 GMTNo More Coal-Fired Plants Built by China Abroad, Xi Jinping Announces
08:22 GMTUkraine's Internal Affairs Ministry Says Shots Fired at Car of Zelenskyy's Aide Shefir
08:07 GMTRivers of Molten Lava Flow Towards Ocean as La Palma Volcano Continues to Erupt
08:03 GMTIran Offers India Joint Commission on Afghanistan, Wants 'Preferential' Trade Pact to Be Finalised
08:00 GMTSenior US Army Official Says Russia ‘Primary Military Threat to Homeland’