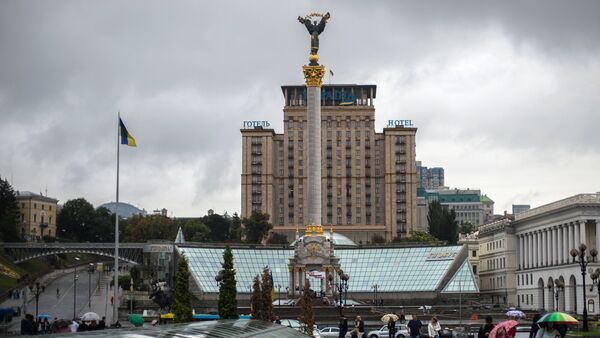 On Sunday, Ukrainian President Petro Poroshenko announced that a visa-free regime with the European Union for Ukrainian citizens has come into force.

On May 17, President of the European Parliament Antonio Tajani and Malta's Interior Minister Carmelo Abela, presiding at the Council of the European Union, signed a document on amending the bloc's legislation to grant Ukrainians the 90-day visa-free regime, which entered into force at midnight local time on Sunday (21:00 GMT on Saturday).

Speaking at an event in Kiev, Poroshenko said that it was symbolic that the visa-free regime was enacted on the eve of June 12. On this day, Russia celebrates Russia Day, a national holiday commemorating national independence and sovereignty.

"We [Ukraine and Russia] finally became independent from each other, including politically, economically, energetically and mentally," Poroshenko stated.

According to him, the introduction of a visa-free regime with the EU is a lucky streak and a "dream of several generations of Ukrainians."

While Ukraine’s cultural identity and "mentality" is a separate topic, cold facts show that Kiev’s political, energy and economic independence is an illusion.

To a certain extent, the stability of Poroshenko’s presidency and his coup-installed government has relied on the Russian factor. The ongoing conflict in Donbass has been a fertile ground for anti-Russian rhetoric among Ukrainian political elites.

Groundless allegations of Russia’s involvement in the military conflict in Donbass (and the need to repel the "aggressor") are popular among Ukrainian politicians, trying to justify their own flaws, from political turmoil to corruption and social turbulence, before the voters.

Russia Regrets Ukraine Pursuing Visa Regime, Response Moves Premature - Moscow
However, such issues as Donbass, Crimea and the Minsk agreements have also been exploited by Kiev to build its relations with the West, particularly, searching for military and political assistance from the United States and the EU as well as for new loans from the International Monetary Fund (IMF) to shore up the failing economy.

"Poroshenko wants to drag Russia into an open conflict at any costs. Thus he wants to restore [Ukraine’s] reputation as a country humiliated by an aggressor. Of course, Kiev will need financial support and other foreign aid to do that," Vadim Kolesnichenko, President of the International Council of the Russian Compatriots, told Radio Sputnik.

According to Kolesnichenko, Ukraine’s propaganda machine continues to portray Russia as an "aggressor" and feeds this lie both to Ukrainian people and Kiev’s partners in the West.

Russia Cannot Implement Minsk Deal Unilaterally, Instead of Ukraine - Putin
"In two years since the Minsk agreements were signed in February 2015, Poroshenko did his best, including political intrigues and maneuvers, not to implement the Minsk agreements. He realized what Washington and Brussels expected from Kiev. Amid bold statements about the implementation of the deal, Kiev continues to blame Russia, which is not even a legal participant to the Minsk peaceful process," political commentator Zakhar Vinogradov wrote in an op-ed for Sputnik.

Finally, Kiev cannot expect that West’s political support will last forever. The concept of a Westernized Ukraine, once greeted by the West, has recently been breeding skepticism both in Washington and Brussels. At the same time, Poroshenko and his government have already contributed enough to ruin relations with Russia. The question is whether Kiev will be able to restore political ties with Moscow is the West decides to turn away.

Kiev Preparing for a New 'Gas War' With Russia
Despite Kiev’s plan to cut its reliance on Russian energy supplies, Russian natural gas continues to remain the crucial component of the country’s energy sector.

Moreover, Ukraine remains a transit country for Russian gas to Europe, and Kiev does not want to lose transit fees. The issue of a new transit contracts between Ukraine and Russia’s Gazprom is currently on the agenda.  In February, Russian President Vladimir Putin said that Russia may continue to supply gas to Europe via Ukraine if it is economically reasonable.

However, recently it was reported that Ukrainian energy company Naftogaz refused to send a delegation for talks in Moscow. The company said that it was ready to hold talks with Gazprom only on the territory of the EU.

According to Yury Solozobov, head of the "International Energy Policy" research center, Ukraine needs Russian gas but the situation is complicated by politics.

"A man can dream, but each anthracite thermal power plant will require up to $150 million to be modernized for the use of gas coal. There are six such power plants in Ukraine. Currently, Kiev doesn’t have the money. This plan is unlikely to be implemented in the coming two years," Russian journalist and industrial expert Leonid Khazanov told Radio Sputnik.

Don't Have It? Steal It! Ukraine Moves to Confiscate Coal Shipments From Donbass
"Kiev doesn’t have money and capabilities to do modernize its thermal power plants. Loans from the IMF were not used to build an independent energy system," Alexei Anpilogov, an energy expert and head of the Osnovanie research center, told the Russian online newspaper Vzglyad.

He suggested that if the situation reaches the critical point Kiev could ask to buy Russian coal.

"If there is a matter of life and death I don’t think Kiev will shut down its power plants just to do harm to Donbass or Russia," Anpilogov concluded.

Ukraine's Economy Recovering Modestly, Reforms Still Needed - World Bank
In the recent three years, Ukraine’s national currency, the hryvnya, has devaluated more than threefold against the US dollar and the euro. Moreover, the Ukrainian economy has been plagued with corruption, repeated risks of default and stalled reforms.

All of the above resulted in a significant decrease in living standards in Ukraine. For the majority of Ukrainians, opening borders with the EU is not a possibility to travel more, but to pack their bags and go to Europe in search of a better life.

Currently, the minimal wage in Ukraine is some €110 ($123) while the average wage is €230 ($258). According to Ukrainian media, a lot of Ukrainians simply do not have enough money even for a short trip to the EU.

"In the current situation of nationwide poverty, retired people, students and dozens of millions of workers cannot even dream about traveling in the EU," a statement of the "Ukrainian Choice" social movement read.

Moreover, some EU countries are concerned about the possible influx of migrant workers from Ukraine.

Migrant Crisis Part II: EU Braces for Flood of Illegal Ukrainian Migrant Workers
Many Ukrainians want to work in Germany and other Western European countries, but the labor market in those countries is flooded with migrants from other regions, and they have to travel to Poland and Russia.

According to a Ukrainian survey, five million Ukrainian citizens work abroad, including 2.5 million in Russia. In 2016, migrant workers sent to Ukraine some €7 billion ($7.8 billion) while foreign investments reached only €3 billion ($3.4 billion).

Maybe, someday Ukraine will finally break free from Russia, but as for now Poroshenko’s statement on Moscow and Ukraine "becoming independent from each other" is rather lip service.

The visa-free regime is unlikely to strengthen Ukraine’s sovereignty, taking account its domestic political instability, the unresolved Donbass conflict and economic difficulties. At the same time, it is very likely to further add to an ongoing decline in Ukraine’s population.

"According to opinion polls, 30 percent of Ukrainians are ready to run away from their homeland even today. The country's economy simply cannot offer jobs to [Ukrainian] citizens. Following the [Euromaidan Revolution], Ukraine has lost more than two and a half million jobs, while half a million entrepreneurs have closed their businesses," Sputnik contributor Nyura N. Berg wrote in an op-ed.