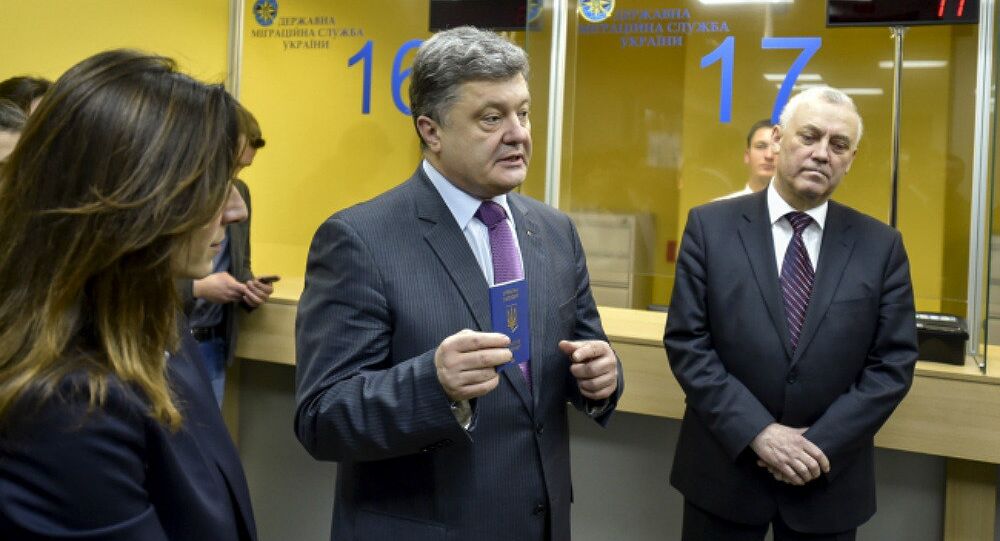 Less than two weeks from now, Ukrainians will receive the right to travel to European countries without a visa for up to a 90 day period. Observers say many Western countries are getting jittery about the prospects of a flood of Ukrainian illegal migrant workers coming into their countries. Russian experts say these fears are well-founded.

Earlier this month, the EU parliament and the European Council formalized a long-awaited visa liberalization agreement with Ukraine. Ukrainian President Petro Poroshenko dubbed the decision 'historic', saying that it was Ukraine's final goodbye to its Soviet and Russian 'imperial past'.

The agreement, expected to take effect June 11, will allow Ukrainian citizens with biometric passports to enter Schengen Area countries (except for the UK and Ireland), for up to 90 days in any 180-day period visa-free. During entry, travelers will be required to produce a return ticket, proof of a hotel reservation or an invitation from relatives living in the EU, proof of medical insurance and at least 45 euros for each day they plan to spend on Schengen Area territory.

© AP Photo / Virginia Mayo
A Century Late, Poroshenko Declares Ukrainian 'Divorce From Russian Empire'
As June 11 approaches, however, some European observers are becoming increasingly nervous that Ukrainians will use the visa-free arrangement to come and work illegally in EU countries, finding ways around the restrictions of their temporary tourist visas. On Sunday, The Financial Times ran a story explaining that aside from Poland, which takes advantage from an influx of Ukrainians coming in to do jobs Poles don't want to, Western European nations are concerned about a possible mass inflow of Ukrainians starting next month.

"These fears are well-founded. Notwithstanding the fact that the EU has adopted special regulatory measures aimed at preventing the influx of guest workers, it's obvious that many Ukrainian citizens will attempt to use the visa-free regime to stay in Europe," the analyst said.

"And these aspirations are understandable," Shapovalov added. "The Ukrainian economy is facing a grave crisis, exacerbated by political problems and those related to the [war in eastern Ukraine]. In this situation, working abroad is not just a decision taken on a whim, but a real opportunity to avoid the tremendous social problems and poverty which are typical for Ukraine."

© Sputnik / Mikhail Voskresenskiy
New IMF Tranche to Kiev Not Happening Unless Kiev Sells Off Land, Raises Pension Age
According to a 2016 United Nations report, 80% of Ukrainians live in poverty, earning less than $5 a day. About 1.9 million Ukrainians, or 9.5% of the working population, are also unemployed.

Shapovalov suggested that the problem of possible illegal labor migration to EU countries is only compounded by the fact that Kiev is actively seeking to discourage Ukrainians from coming to Russia to work.

An estimated 2.1 million working-age Ukrainians are estimated to be living and working in Russia. They send home hundreds of millions of dollars-worth of remittances to their home country each year. If these migrant workers are squeezed out of Russia, they will need to find somewhere else to go to feed families.

"It's no secret that there are millions of Ukrainians working in Russia. If the Ukrainian government creates a regime banning citizens from working in Russia, Ukrainians will have nothing left to do but dash from the east to the west, that is, to seek work in Poland, Germany, France and the UK. This is the result of the policy being pursued by Kiev and, indirectly, the EU," Shapovalov concluded.

Why EU May Soon 'Abandon Visa-Free Regime' With Ukraine

Not as Rosy as Painted: Why EU Visa-Free Regime Will Soon Infuriate Ukrainians