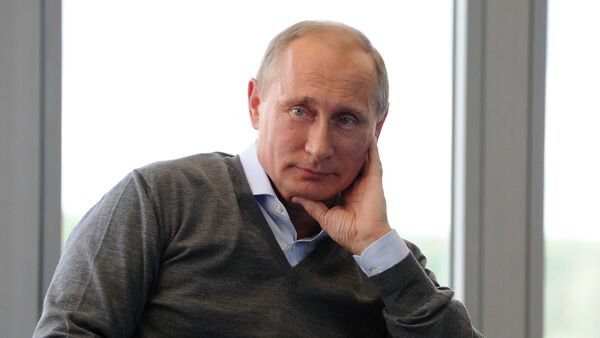 Russian President Vladimir Putin told Oliver Stone in an interview that he is already a grandfather.

Russian President Putin Reveals Secrets of His Private Life
The full four-part documentary by Stone, dubbed The Putin Interviews, will be broadcast by the Showtime television network on June 12-15. The documentary has been partially released to date.

Stone's documentary about Putin has offered a rare glimpse into Putin's personal life as the Russian president avoids speaking about his family.

Oliver Stone asked Putin whether he likes his grandchildren.

"Putin says he does but admits he doesn't have much time to play with them," CNN cited the interview.

Putin: Life Means Nothing Without Love
During his annual press conference in the end of 2015, Putin spoke about his daughters. He said he is "very proud of them" and they "continue to study and work. My daughters freely speak three European languages. One of them speaks even one or two Asian languages, one of them knows even four European languages. They use them [knowledge of foreign languages] in work," Putin said.

"I never discuss issues related to my family. They [Putin's children] are not involved in business or politics," Putin noted, adding that his daughters "live in Russia and have never changed permanent residency."

"I have never done this and am not going to say now where exactly my daughters work and what are they doing, for very many reasons, including security issues," Putin explained. He also noted that every person has the right to his own destiny, adding that his daughters "have never enjoyed life in the spotlight."

"They just live their lives and do it very worthily," the president said.

Things That Americans Don't Know About: Oliver Stone on His New Film About Putin
Also in 2015, Putin revealed details of his personal life during a meeting with international news agencies on the sidelines of the St. Petersburg forum. The Russian leader said that he has friendly relations with his ex-wife Lyudmila, as well as with his daughters Maria and Ekaterina. Putin said that sometimes he doesn’t go to sleep until 2 a.m. because he is talking with his family members.

During his last end of year news conference in December 2014, Putin assured those who were interested in his private life that he loves and is loved.

Earlier, the Kremlin commented on the documentary by saying that "we are also looking forward [to the documentary], we are interested in the way Oliver Stone has arranged the material. He is a gifted person, a person who is unpredictable in his creative works, which is why we are interested. But we have not watched the film yet."

Stone is famous for making films focused on urgent political issues, and his latest work, released in late 2016, was devoted to former National Security Agency (NSA) contractor-turned-whistleblower Edward Snowden. In late April, Stone said he was working on a film about Putin.