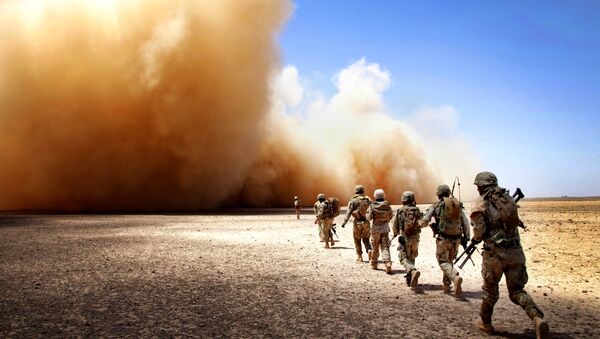 © Flickr / Marines
Subscribe
International
India
Africa
The Pentagon ostensibly hopes to destroy Daesh's branch in Afghanistan in 2017, but political analyst Dmitry Verkhoturov told Radio Sputnik that Washington is unlikely to achieve this goal because an efficient counterterrorism strategy cannot be limited to military means of dealing with terrorists.

"I think it's above their strength. They are more likely to reduce the level of Daesh's activity in certain provinces by forcing them to relocate to temporary hideouts in other areas," he said.

Afghanistan Forces Eliminate Head of Daesh in Country
Verkhoturov, an expert at the Centre for Contemporary Afghan Studies, maintained that there are two possible options for Washington when it comes to anti-Daesh operations in Afghanistan. The United States could either carry out a military operation or engage in a "bargaining game," as the analyst put it.

Tackling Daesh in Afghanistan would not be easy because Washington lacks experience needed to efficiently deal with guerrilla warfare, the analyst added.

"The fight against guerrilla forces regardless of their ideology is a complex effort, which includes political, economic and administrative measures. It is simply naïve to say that Americans would come, carry out several operations and Daesh would suddenly disappear," he said.

Asia
Afghan-Pakistani Border Clash Kills 50, Injures 100 Afghan Soldiers
Earlier in May, US Navy Captain Bill Salvin, a spokesman for the US forces in Afghanistan, told AFP that the NATO-led Resolute Support mission has "a very good chance" of destroying Daesh's local offshoot in 2017, "making it very clear that when [Daesh] fighters are destroyed elsewhere around the globe that this is not the place for you to come to plot your attacks."

In April, the Pentagon dropped a GBU-43/B Massive Ordnance Air Blast (MOAB) in Afghanistan. The mission marked the first time the weapon, nicknamed the "Mother of All Bombs," was used in combat. The GBU-43/B is the largest non-nuclear weapon in Washington's arsenal.