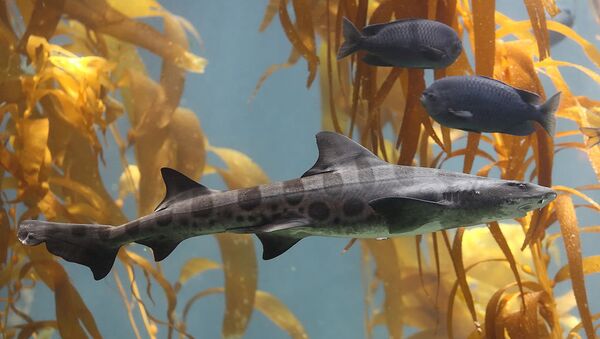 For seven weeks now, hundreds upon hundreds of leopard shark corpses have been washing up on the beaches of San Francisco Bay, turning the City by the Bay into the “Dead Shark Capital of California.”

A similar incident occurred in 2011, when the beautiful beaches of San Francisco Bay were choked with the fetid corpses of leopard sharks. Similar die-offs have been reported going back to 1967.

"I look at it as a 50-year-old shark murder mystery, and we are hopefully closing in on the killer," said California Department of Fish and Wildlife senior fish pathologist Mark Okihiro to Bay Nature, a California conservation group.

Okihiro's necropsy found that the sharks were being killed by infections, for the most part. When a marine animal like a shark gets an infection, it's usually been caused by dirty and diseased water. But the water in the San Francisco Bay is famously clean, which has made the cause of this phenomenon a mystery.

Other marine animals, like manta rays and halibuts, have also been turning up, but the majority of the dead are leopard sharks. "We can't actually keep up with the volume of calls we get on a day-to-day basis," said Sean Van Sommeran, executive director and founder of the Pelagic Shark Research Foundation, to SF Gate. "This is just the tip of the iceberg. We're only seeing a fraction of the actual losses."

Van Sommeran blames the die-off on Redwood City, a city of some 77,000 people 27 miles south of San Francisco. "That appears to be the epicenter of all these incidents," he said. Redwood City uses tide gates to prevent flooding of coastal homes during high tide.

The problem is that the shallow waterways the tide gates block off are the same places where leopard sharks come to mate and give birth. The tide gates then close and trap the leopard sharks inside with storm runoff and dirty water, eventually sickening and killing the sharks.

This has been exacerbated by the drought that California has been gripped by several years now. The shallow bay waters are exceptionally polluted without rain to wash the filth away.

"During drought, stuff that would usually get washed away congeals and backs up," Van Sommeran explained. "So with the hard rain there's extra crud going into the watershed… the water becomes toxic and the sharks can't cope with it."

Then when the tide gates open again, the rotting carcasses float back into the bay and are carried to shore by the tide.