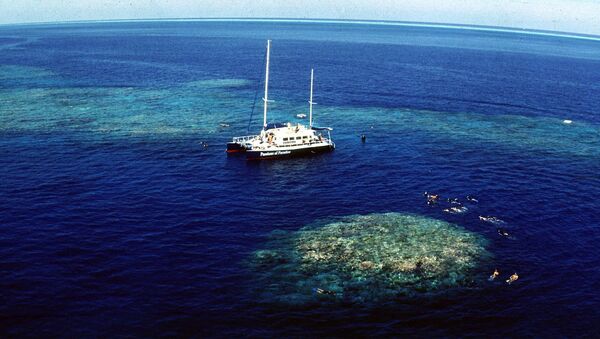 Multiple proposals to save Australia's endangered Great Barrier Reef now include the implementation of an artificial cloud bank above the threatened maritime region, home to the greatest range of biodiversity on Earth.

While many proposals to save the endangered reef have been floated — including the logical one: global legislation to limit the warming effects of human-induced climate change — few have approached the audacity of a recent claim made by researchers working with the Sydney Institute of Marine Science and the Ocean Technology Group at the University of Sydney: to manufacture cloud cover over the reef.

Thought to be offered as a last-ditch method of cooling the inexorably rising seawater temperatures surrounding the dying reef, researchers have proposed diffusing salt into the air. According to experiments, the application of marine cloud brightening technology (MCB) would cause larger water droplets to form in the atmosphere, thereby creating a larger, thicker cloud cover which would, in turn, cool the surrounding oceans.

In ongoing efforts to stop, or at minimum begin to slow, the catastrophic bleaching that is killing the 1500-mile-long maritime habitat, Daniel Harrison, a researcher contributing to the study, affirmed that attempting to pump cooler water directly onto the reef to reduce temperatures, as well as genetically engineering the corals to survive in warmer water, had been discussed.

The bleaching of the reef has been ongoing, and is a direct result of increasing seawater temperatures, including those around the globe, documented as being the result of global atmospheric warming resulting from human-induced climate change.

While it is scientifically accepted that reducing atmospheric carbon, predominantly in the form of ending the burning of fossil fuels as an energy source, is the only authentic means to mitigate the deadly ongoing reef-bleaching event, the sheer amount of time that is required to effect a global change means that quicker, and more local, solutions must be found.

"I think the general public, and indeed many scientists, do not fully grasp the magnitude of the global warming problem," Harrison said, adding, "Sensitive ecosystems such as the Great Barrier Reef are beginning to collapse before our eyes," according to Deutsche Welle.

"If we can invent technology to explore beyond our solar system, walk on the moon — and perhaps Mars in the not-too-distant future — then surely we can save the Great Barrier Reef from death by overheating," he said.

MCB, while not a new science, has seen significant developments in the past decade, particularly in the form of advanced computing and more detailed meteorological mapping.

"We are concentrating on MCB as a means to address the problem of bleaching on the Great Barrier Reef primarily because it has the potential to mitigate bleaching over the reef's incredibly large area — approximately the size of Germany," Harrison said, cited by Deutsche Welle.

As the process involves non-invasive materials, it is considered to be a lesser of several evils, in the hotly debated sphere of climate modification.

"One of the advantages of MCB," Harrison suggested, "is it replicates natural processes of sea spray generation which adds cloud condensation nuclei into the marine boundary layer."

"No chemicals are used," he said, "the droplets are very short-lived, perhaps around 24 hours, and we would only need to use the technology during periods when the corals were at high risk of bleaching."

Dispersing the solution requires further study, as size and flow of the materials must be determined to allow for the most efficient application of the technique.

"I would like to create a prototype cloud-brightening installation for testing within the next one to two years. The reef is already experiencing its second major year of bleaching in a row and if we are going to intervene, we need to do it now."