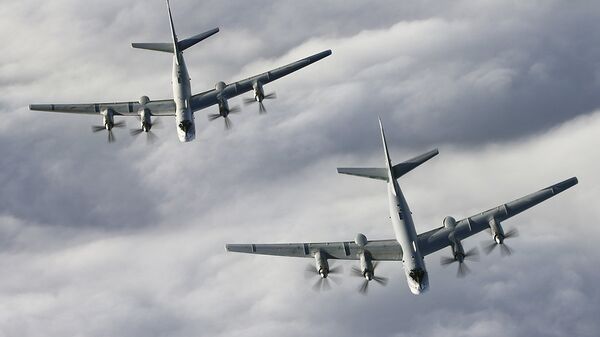 Ilya Tsukanov
All materialsWrite to the author
On Tuesday, the US Air Force tracked two Russian nuclear-capable Tu-95MS bombers flying off the coast of Alaska for the second night in a row. The second time, the US didn't scramble its fighter jets. Why? And what were those Russian strategic bombers doing near Alaska in the first place? Sputnik investigates.

On Wednesday, officials confirmed to Fox News that Russia had again flown two long-range strategic bombers near Alaska the night before, this time coming within 36 miles (67 km) of the US mainland as they flew north of the Aleutian Islands.

Russian Nuclear-Capable Jets Fly Near Alaska for Second Night in Row
This was the second time this week that Tu-95MS 'Bears' skimmed the Alaskan Coast.

In the first incident, which took place Monday night, the US Air Force ended up scrambling two F-22 stealth fighters and an E-3 Sentry early warning plane to intercept the Russian planes, which were flying about 100 miles (about 161 km) from Kodiak Island.

However, the second time around, the Air Force decided to limit its response to sending up a lone E-3 Sentry.

Confirming the Monday's interception, the Russian Defense Ministry offered new details, saying that the US F-22s had trailed the Russian planes for 27 minutes, after which the bombers left the US's 200 mile air defense identification zone.

According to the Defense Ministry, the planes were engaged in a patrol mission over international airspace in the Pacific, returning to their base in the Amur Region after flying about 5,000 km at speeds up to 850 km per hour and altitudes up to 10,000 meters.

US Sends Two F-22 Jets in Response to Russian Tu-95 Bombers Near Alaska
The Ministry stressed that Russian military aircraft regularly carry out patrol flights over neutral waters in seas and oceans around the world, including the Arctic region, the Black Sea, and the Atlantic and Pacific Oceans. "All flights…are carried out in strict accordance with international rule in the use of air space over neutral waters, without violation of borders of other states, the Defense Ministry's statement noted.

Why didn't the US Air Force scramble its jets the second time around? According to Fox News, the US military may have felt that it was sufficient to send up its E3 Sentry to make sure that the two 'Bears' were alone, and that no other aircraft were flying underneath the wings of the large planes. 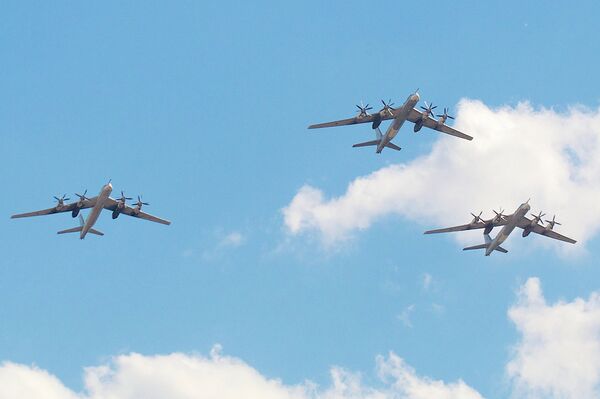 Alexei Leonkov, a military expert and commercial director of Arsenal of the Fatherland, a popular Russian military publication, told Radio Sputnik that the US Air Force made the right call by not scrambling their fighters the second time around.

"This kind of flight, close to the Russian border, and not approaching the US border, is a routine matter for our strategic and long-range aircraft," Leonkov noted. "The same thing is done by the Americans. For example, their reconnaissance planes regularly appear on our shores."

Modernized Tupolev Tu-95MS: The Old Russian 'Bear' That's Still Got Spunk
The expert explained that "when such flights are made, the parties usually inform one another that these aircraft are not carrying nuclear weapons – that this or that flight is a training exercise, meant to carry out various flight tasks."

With this in mind, Leonkov noted that "to scramble aviation again to intercept aircraft that do not constitute a threat makes no sense. I think that's why the Americans didn't do it the second time. The first time they scrambled their jets for the sake of a media PR campaign, but doing so a second time – what's the point?"

The last time Russian bombers appeared this close to US territory was in July 2015, when a pair of Tu-95s flew along the coasts of Alaska and California.

But What Were the Russian Planes Really Doing There?

Even if the Russian aircraft were simply engaged in a training exercise, the question that arises is 'training for what?' According to RIA Novosti contributor Alexander Khrolenko, there are several good reasons.

For one thing, in addition to nuclear bombs, the Tu-95MS is capable of carrying powerful conventional cruise missiles. Russia has recently been showing off this capability, targeting the Daesh and Nusra terrorists in Syria.

Furthermore, Khrolenko recalled, US generals themselves believe that the Russian flights in the Pacific are intended to help keep an eye on and monitor NORAD (North America's air defense network).

"In Alaska," the journalist wrote, "a couple kilometers from the city of Anchorage is an important US airbase – Elmendorf Air Force Base. It has two runways, and is used to transport troops and cargo from the US to the Far East and Southeast Asia, for testing aviation equipment and for training troops in Arctic conditions."

"Elmendorf is also home to the command of NORAD's Alaska Air Defense zone, and is the headquarters of the US 11th Air Force, which includes fighters, air defense systems, search and rescue, meteorological equipment, and other units. Next door is the US Army's Fort Richardson Base."

Khrolenko explained that naturally, "such important military facilities near Russia's neighborhood cannot be left without attention by our intelligence and aviation."

Anti-Aircraft Brotherhood: What Joint 'Russian Commonwealth' Air Defense Can Do
By next year, the Russian Ministry of Defense plans to complete the deployment of a new coastal defense division in Chukotka, which at its narrowest point is less than 100 km from the US border.

The division could to be armed with the Bastion coastal missile system, Iskander tactical missile systems and S-400 air defense systems, and will be integrated into the Russian system of defense of its Far East. "Reliable support from aviation and effective means of electronic warfare for the new division would also be useful," Khrolenko concluded.