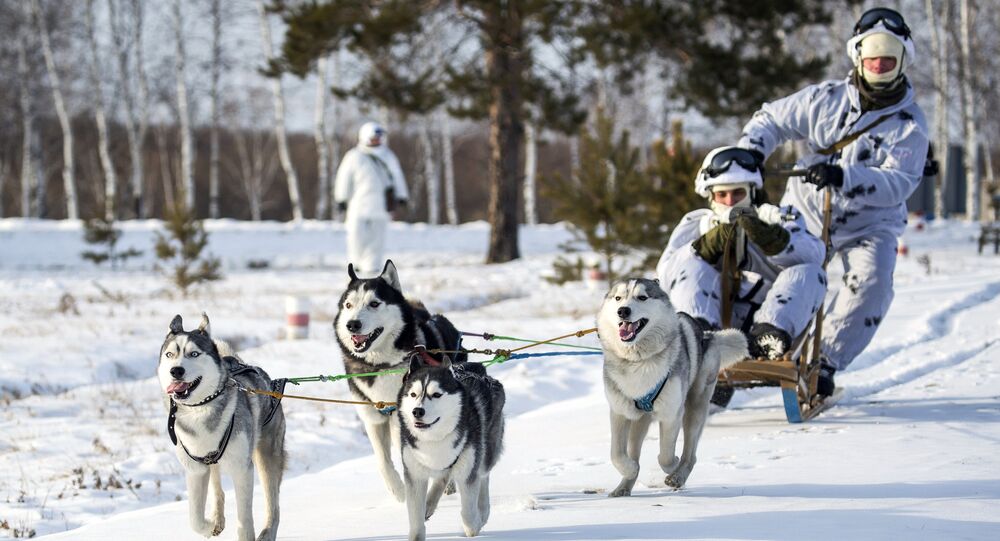 Symmetrical Response: Russia Will Get Division of Troops 85 KM Off US Border

Last week, Russian Defense Minister Sergei Shoigu confirmed that the Russian military plans to establish a coastal defense division in Chukotka, eastern Russia by 2018. Respected independent defense analyst Sergei Ishchenko comments on the news, and on how it may ultimately affect the security situation in the region.

Speaking at a Defense Ministry meeting on Tuesday, Shoigu confirmed that "there are plans to form a coastal defense division in 2018 on the Chukotka operational direction." The minister added that this decision was actually made in July 2015, and is part of a plan to establish a unified system of coastal defense stretching from the Arctic in the north to the Primorye Territory in the south.

The system, according to Shoigu, is intended "to ensure control of the closed sea zones of the Kuril Islands and the Bering Strait, cover the routes of Pacific Fleet forces' deployment in the Far Eastern and Northern sea zones, and increase the combat viability of naval strategic nuclear forces" operating in the area. In other words, the new division will help ensure the defense of Russia's sparsely populated eastern coast.

Commenting on the defense minister's announcement in an analysis for the independent online newspaper Svobodnaya Pressa, defense analyst Sergei Ishchenko pointed out that so far, no other details have been provided on this future military force. "However, it's obvious that this is not just ordinary news, not least because what we're talking about is the creation of a serious military force just a stone's throw away from the United States: only the Bering Strait will separate the Russian coastal defense division from Alaska. At its narrowest point, that's only 86 km away. Therefore, it's worth taking a closer look at this announcement."

"Secondly," Ishchenko noted, "we have had a short-lived but not particularly successful experience in creating coastal defense divisions as part of the Soviet Navy." The analyst recalled that in the late 1980s, in accordance with the Treaty on Conventional Armed Forces in Europe, the Soviet military transferred four infantry divisions to the Navy, placing them in the charge of the Baltic, Pacific, Northern and Black Sea Fleets.

"Of course, the personnel, armaments and equipment used by these suddenly 'navalized' forces did not change, and remained typical Soviet ground forces' fare. It's just that their range of tasks now also included the defense of sea and ocean coasts, fighting enemy landing parties, and being prepared for their own deployment on enemy shores in the second tier after the naval infantry."

© Sputnik / Anna Yudina
Why Russia is Strengthening Its Arctic Northern Periphery
"In reality, these coastal defense divisions did not have the time to prepare to carry out these tasks," the analyst noted. "The two that stood at Klaipeda [Lithuania] and Simferopol [Crimea] did not survive the collapse of the USSR." As for the divisions inside Russia proper, the last of them, the 40th Division of the Pacific Fleet, was disbanded in 1994.

Apart from that, the Chukotka region has already stationed another Soviet military force – the 99th Motorized Rifle Division, which while not operating formally as a coastal defense division, defended Anadyr and its environs beginning in 1983.

Back then, Ishchenko recalled, the Soviet Union and the United States were locked in the Cold War struggle. In a situation where US intermediate range missiles based in Western Europe were capable of reaching the Soviet capital in just over five minutes, the Soviet defense ministry responded with plans to deploy its own intermediate range missiles, the SS-20 Pioneer, against Alaska and the northern states of the US West Coast, in Chukotka.

© Wikipedia / George Chernilevsky
The RT-21M Pioneer missile and launcher on display in Kiev. The missiles were destroyed in accordance with the Intermediate-Range Nuclear Forces Treaty.

"The kill zones of our missiles included the US early warning station at Clear, Alaska, the Cobra Dane radar on Shemya Island in the Aleutians, the Parks early warning radar in North Dakota, and the US nuclear missile sub base at Bangor, near Seattle. That was enough to force Washington to put on its thinking cap."

The 99th Motorized Rifle Division was deployed to the Far East to keep an eye on the Pioneer missiles, and to defend the strategically important Anadyr Airport, which then held the strategic bombers patrolling the northern Pacific near US borders.

"What were the conditions like for our motorized infantrymen in these parts? During the winter, which in Chukotka lasts nearly 9 months, the division's tanks, armored personnel carriers and other vehicles were buried so deep under the snow that it was necessary to search for them using improvised wire feelers. Those Moscow journalists who visited the area in the 90s named the 99th Motorized Rifle the 'Frozen division'. But at the same time, neither would it be easy for anyone who dared to encroach on Soviet Chukotka. Across the Bering Strait, the US Army fielded the 6th Light Infantry Division."

© Sputnik / Sergey Mamontov
Cutting-Edge Russian Floating Nuclear Power Station Undergoes Mooring Tests
In the early 1990s, the expert wrote, "the winds of Gorbachev's perestroika blew everything away – including the Pioneer missiles, the Anadyr airport, its top-secret Object C nuclear storage facility, and the 99th Motorized Rifle Division itself, which was disbanded in 1996." For many years, "the polar winds whistled through Anadyr's abandoned barracks, among the military equipment, and the clubs, cafeterias and homes of the officers…"

"The restoration of the area's garrisons began with the airfield. The military returned there in 2014. Anadyr has once again become an airbase for the Tu-95MS and Tu-160 strategic bombers, which regularly visit from the Engels air force base along the Volga. Returning the Pioneers is impossible – they were all destroyed. But a division of troops, it's now clear, will come here once again – this time not the 99th Motorized Rifle, but a coastal defense division belonging to the Pacific Fleet."

Some may ask why the Russian military would seek to place a division's worth of troops in such an inhospitable area. The answer, Ishchenko suggested, isn't hard to find. "To find the answer to that question, it's enough to look across the border. In Alaska, we see a scattering of important objects belonging to the US Army. First of all, this is the Elmendorf Air Force Base at Anchorage, which stations not only aircraft, but the command of the 11th Air Army and the Alaskan zone of NORAD. Next door is Fort Richardson, which houses the 4th Brigade Combat Team (Airborne) of the 25th Infantry Division."

© Flickr / manhhai
What Are US Strategic Bombers Doing Snooping Around Russia's Arctic Borders?
"And most important, of course, is the air base. It's from its well-heated hangers that the newest fifth generation US fighter, the F-22 Raptor, rises into the air to intercept the Russian strategic bombers which have resumed regular patrols along the edges of US Arctic borders."

Effectively, the analyst suggested, "if we suppose that alongside the coastal defense division, Russia deploys the Iskander mobile short range ballistic missile system, the US F-22s may no longer have time to intercept the Russian bombers, while US missile warning stations could unexpectedly go dark." In any case, he noted, "the staff at the Elmendorf base, and the troops at Fort Richardson will go to bed at night with an uneasy feeling, as they did during Cold War days."

Perhaps then, US military officials may get at least a taste of the concern Russian military planners feel when they see large-scale NATO exercises along Russia's western frontiers, and parades involving US troops just a few hundred meters from Russia's borders.