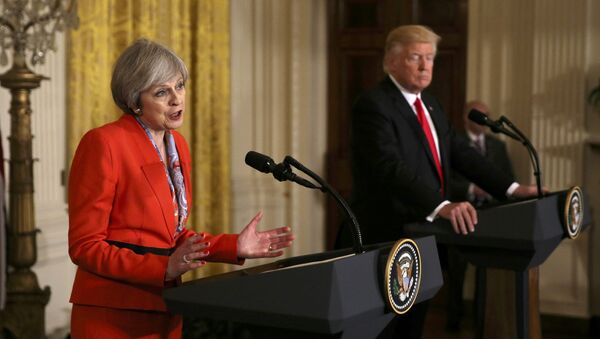 © REUTERS / Carlos Barria
Subscribe
The UK's decision to back the unilateral US military bombing of Syria has been denounced as an act of war. Dr. Hans Kochler, the President of International Progress Organization - a Vienna based group affiliated with the UN - told Sputnik that the US attack is illegal, and indicative of a "double standards" foreign policy adopted by Western powers.

UK Defense Secretary Sir Michael Fallon has rebuffed accusations that the UK is throwing it's support behind an illegal act by US President Donald Trump.

On Thursday, April 6, fifty-nine Tomahawk cruise missiles were fired from two US Navy ships in the Mediterranean. Six people were killed, according to the Syrian army.

The assault came days 72 people died in a suspected sarin gas attack on the rebel-held town of Khan Sheikhoun in north-western Syria.

"Our reaction is we fully support what the Americans have done," Sir Michael told BBC Radio 4's Today Program.

"It's limited, it's wholly appropriate, it targeted the airfield… the equipment the Americans believe was used in this gas attack and is designed to deter the regime from planning similar gas attacks."

When pressed that this unilateral attack could amount to a declaration of war, Sir Michael defended the Trump administration.

"No, it hasn't declared war. The Americans have made it very clear that the attack last night was limited, it was narrowly focused.

"They did everything possible to minimize civilian casualties indeed to avoid Russian personnel on that particular airfield."

UK Defence Sec Michael Fallon says "without intervention more blood would have been spilled". This strike will NOT prevent that #Syria

Dr. Hans Kochler, President of the International Progress Organization — a Vienna-based think tank dealing with world affairs,that has consultative status with the Economic and Social Council of the United Nations, told Sputnik that the UK government's stance is to be expected.

"I am not surprised because this is the policy of double standards, these two and other allied countries, have been practicing all along for several decades, particularly since the end of the Cold War.

"They [the UK] have quite often sided with the US in military attacks, also, for instance not to forget against former Yugoslavia, and they have been calling for the respect of international law only when it serves their interests," Dr. Kochler told Sputnik.

According to Dr. Kochler, President Trump's intervention is undoubtedly illegal under international law.

"This was not the case and for that reason, the attack was obviously illegal."

The US military attack came in the midst of the UK and France trying to renew efforts to broker a diplomatic solution to the six year long Syrian civil war.

Despite the marked deviation in foreign policy that backing President Trump has necessitated, Dr. Kochler believes the UK will continue to publicly back the US.

"As far as the UK is concerned, I think they will just go along with their strategic partner the US, and we have seen similar declarations not only from the UK by the way but also Australia and from NATO countries such as Denmark, and even Germany, earlier today [April 7]."

The UK's swift backing of the Trump bombardment has been widely criticized by anti-war campaigners, and by the leader of the opposition Jeremy Corbyn, who derided the US' actions as risking "escalating the war in Syria still further."

The Stop the War Coalition is holding an emergency No to Trump's attack on Syria protest outside Downing St. in central London on Friday (April 7) evening.

000000
Popular comments
Too polite of you, Sputnik. i don't have to be so polite. For decades, successive Brit governments volunteered to have their spines removed in exchange for Muppet handles for DC to use at will. Brit government now is vying with France, Germany and Sweden as the most unquestioning, most slobbery, most unconditionally-adulating doggies for DC.

Rick Sanchez
7 April 2017, 19:41 GMT2
000000
Newsfeed
0
New firstOld first
loader
LIVE
Заголовок открываемого материала
Access to the chat has been blocked for violating the rules . You will be able to participate again through:∞. If you do not agree with the blocking, please use the feedback form
The discussion is closed. You can participate in the discussion within 24 hours after the publication of the article.
To participate in the discussion
log in or register
loader
Chats
Заголовок открываемого материала
Worldwide
InternationalEnglishEnglishMundoEspañolSpanish
Europe
DeutschlandDeutschGermanFranceFrançaisFrenchΕλλάδαΕλληνικάGreekItaliaItalianoItalianČeská republikaČeštinaCzechPolskaPolskiPolishСрбиjаСрпскиSerbianLatvijaLatviešuLatvianLietuvaLietuviųLithuanianMoldovaMoldoveneascăMoldavianБеларусьБеларускiBelarusian
Transcaucasia
ԱրմենիաՀայերենArmenianАҧсныАҧсышәалаAbkhazХуссар ИрыстонИронауОssetianსაქართველოქართულიGeorgianAzərbaycanАzərbaycancaAzerbaijani
Middle East
Sputnik عربيArabicArabicTürkiyeTürkçeTurkishSputnik ایرانPersianPersianSputnik افغانستانDariDari
Central Asia
ҚазақстанҚазақ тіліKazakhКыргызстанКыргызчаKyrgyzOʻzbekistonЎзбекчаUzbekТоҷикистонТоҷикӣTajik
East & Southeast Asia
Việt NamTiếng ViệtVietnamese日本日本語Japanese俄罗斯卫星通讯社中文（简体）Chinese (simplified)俄罗斯卫星通讯社中文（繁体）Chinese (traditional)
South America
BrasilPortuguêsPortuguese
NewsfeedBreaking
15:07 GMTEU Commission Chief Announces Launch of Competitor to China’s Belt and Road
14:51 GMTEU Not Informed About New US, UK & Australia Alliance, Plans ‘to Assess Implications’
14:48 GMT'BJP's Politics Behind 96% Jump in Communal Riots in India', Says Opposition Congress
14:46 GMT‘No Friend of China’: As Raab Exits Stage Left, What Will UK Foreign Policy Look Like Under Truss?
14:34 GMTSouth African Child Maintenance Payments Delayed by Ransomware Attack
14:34 GMTEuropean Gas Futures Fall Below $750 Per 1,000 Cubic Meters
14:29 GMTIs the Age of the Car Over as Politicians Around Europe Declare War on the Motorist?
14:29 GMTMessage for India? AUKUS Announcement Sparks Debate About Relevance of Quad, Reliability of US
14:15 GMTBlack Market Business for Foreign Visas Skyrockets in Afghanistan, Reports Say
13:29 GMTSequoia National Park in California Closes Due to Massive Wildfire, Administration Says
13:28 GMTRussia Threatens to Take Measures Against US Over Interference in Elections, Foreign Ministry Says
13:28 GMTCricketer Virat Kohli Confirms He Will Step Down as India's T20I Captain After ICC T20 World Cup
13:22 GMTShell Touts Plans for One of Europe's Largest Biofuel Plants
13:16 GMTWomen's Average Salary in Saudi Arabia Has Exceeded That of Men for the First Time, Report Says
13:10 GMTNo More Words: Microsoft Allows Use of Facial Recognition or Fingerprints Instead of Password
12:50 GMTNew Zealand Being Left Out of AUKUS Shows Canberra, Wellington 'Going in Very Different Directions'
12:14 GMTBiden Went For Full Afghanistan Pullout Despite His Cabinet's Advice, Book Claims
12:04 GMTChina Plans to Launch Experimental Reactor That May Revolutionise Atomic Energy Industry
11:26 GMTFrance May Demand Compensation From Australia for Submarine Deal Breach, Defence Minister Says
11:22 GMTKremlin Regrets European Parliament's Russia Report