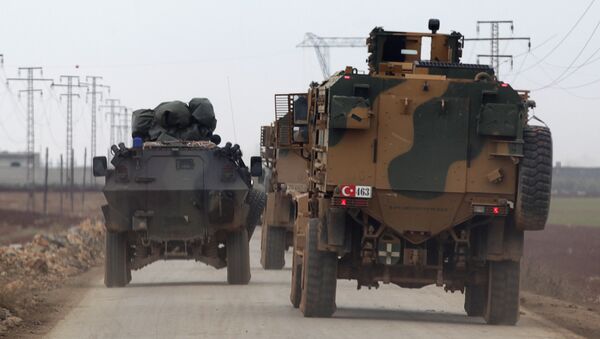 © REUTERS / Khalil Ashawi
Subscribe
Ankara presented to US President Donald Trump a plan for the liberation of Syria's Raqqa from the Daesh terrorist group (banned in numerous countries), but there has been no response yet, Turkish presidential spokesman Ibrahim Kalin said Friday.

ANKARA (Sputnik) — Ankara launched Operation Euphrates Shield on August 24 to push Daesh out of cities and settlements located on Syria's border with Turkey. The military intervention was also aimed at preventing Kurdish forces from moving further west and linking areas they control into a single border region.

"We have presented to Trump a clear plan for the operation in Raqqa, but have not yet received a specific response from the United States," Kalin said at a briefing in Ankara.

Train, Advise, Assist? US Marines Deployed to Syria Spotted on Raqqa Frontline
On Wednesday, the National Security Council announced that Ankara formally ended the campaign, saying that it was a success. The council did not specify whether Turkey plans to pull its forces from the region.

On Thursday, US State Secretary Rex Tillerson arrived in Ankara on a one-day official visit to discuss with Turkish President Recep Tayyip Erdogan and other senior Turkish officials the fight against Daesh and the situation in Raqqa.

The Wrath of Euphrates operation, aimed at liberating Raqqa from the Daesh, was launched in November 2016 by the Kurdish-led Syrian Democratic Forces (SDF). The Pentagon confirmed that US military advisers, aircraft and artillery were deployed to Syria to "train, advise and assist" the SDF and the allied troops.

President Recep Tayyip Erdogan and other high-ranking officials maintain that the Syrian Kurds, particularly the Democratic Union Party (PYD) and its armed wing, known as the People's Protection Units (YPG), are affiliated with the Kurdistan Workers' Party (PKK).

Ankara considers the PKK and any groups it believes are in contact with it to be terrorist organizations, which are trying to carve out an independent state in Turkey and Syria. The PYD, one of the leading Kurdish political parties in Syria, has denied these allegations.