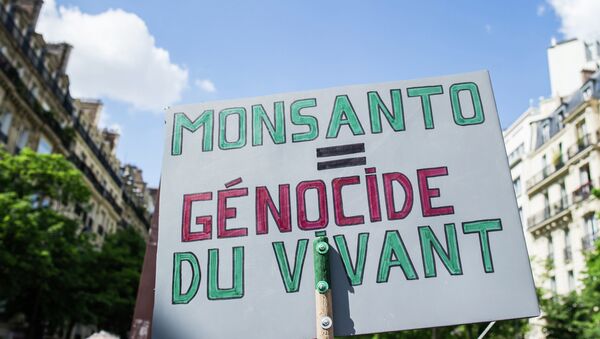 The European Parliament lawmakers called on European Commission President Jean-Claude Juncker to investigate allegations of Monsanto falsifying reports on the safety of a broad-spectrum systemic herbicide and crop desiccant - glyphosate, and take action if violations are found, the statement issued on Friday said.

MOSCOW (Sputnik) — Last week, a federal judge in San Francisco unsealed documents that suggest that Monsanto, the leading producer of genetically modified seeds, knew about genotoxic effects of glyphosate that might, in particular, cause cancer. On Thursday, the Stop Glyphosate initiative group published a report, questioning a number of scientific studies on glyphosate impact, suspecting researchers of being associated with Monsanto.

"To fully investigate whether Monsanto has deliberately falsified studies on the safety of glyphosate and, should it be established, take appropriate legal action against the corporation," the statement said.

The lawmakers also called for blacklisting companies, using "lies as a common policy" and for prohibiting "undisclosed direct contacts of European Commission and Agencies officials with any lobbyist working with or for Monsanto."

Africa
Monsanto Settles Cotton Dispute, Chased from West Africa
Glyphosate is one of the most commonly used herbicides in the world. Critics believe that it may cause cancer and other serious diseases. In 2015, the World Health Organization’s International Agency for Research on Cancer determined that glyphosate is "probably carcinogenic" to humans.

Monsanto argued that there was no evidence that glyphosate was a cause of serious illnesses. Monsanto’s glyphosate products are registered in 130 countries and approved for use over 100 crops.