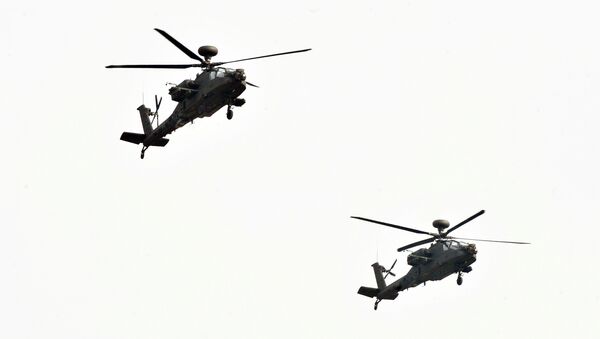 Full-rate production for both current and new AH-64E aircraft is included in the deal, along with training crews, ground support equipment, the construction of new helicopters, engineering services, spares and logistics.

US Apache Helicopters Now Can Control Drones in Flight

The US Army’s Contracting Command will oversee the undertaking.

"Work will be performed in Mesa, Arizona, with an estimated completion date of June 30, 2022," according to a Defense Department statement, and Boeing received funding for procurement during contract modification on March 15.

Apache project manager US Army Col Joseph Hoecherl said in a Boeing statement, "This agreement is great news for our Army, our soldiers, the American taxpayers, our industry partners and numerous worldwide partners," adding that "It is a direct result of the professional dedication and diligent efforts by government and industry teammates to provide the much needed capabilities of the world's best attack helicopter — the AH-64E Apache — at a fair and affordable price that results in year over year savings to the taxpayer. In the hands of our trained U.S. soldiers, the Apache's technologies and resulting capabilities are essential to Army operations around the globe."

MIlitaries around the world use the multirole helicopter, including the US Army, which first received the craft in January 1984. Armed forces in Greece, Israel,  Egypt, Japan, Britain and South Korea are also operations besides Saudi Arabia and the US.