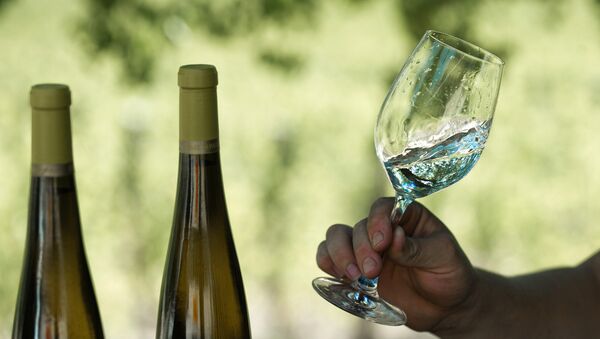 © Sputnik / Vasily Batanov
/
Go to the photo bank
Subscribe
Even though wine production in China has slowed down a bit, along with wine imports, by 2020 the People’s Republic is expected to become the second biggest wine market around, Vinexpo executive director Guillaume Deglise told Sputnik.

The Chinese wine market is now the fourth largest in the world after the US, Britain and France.

The expected jump to second place in a matter of just three years will be ensured by growing sales of imported and domestically produced wines, resulting in a 39.8 percent expansion of the domestic market, Xinhua reported.

In Vino Veritas: Famous Crimean Wine to Appear on Chinese Store Shelves
In an interview with Sputnik China, Cheng Fengyng, an expert with the Chinese Institute of Modern International Relations, explained the projected rise in wine consumption in China by the country’s socioeconomic development.

“The fast growth of the Chinese economy entails a continuous improvement of the people’s living standards. The past decade has seen a notable growth in our wine imports, especially in the coastal regions with high per-capital GDP figures,” Cheng Fengyng said.

He added that with urbanization gaining pace, city dwellers, who are less conservatively-minded than their rural countrymen, more readily accept new products.

“This means that China could become the world’s second wine market even before 2020,” Cheng Fengyng noted.

According to the International Organization of Vine and Wine, China boasts the world’s second largest vineyards after Spain. In 2015 China became  the world’s number one producer of grapes — with Italy, the US and France trailing behind.

The company bought France’s Bordeaux vineyard Chateau Viaud in 2011 and Chile's Biscottes in 2010 and now has its sights on the world-famous wineries in California and Australia.