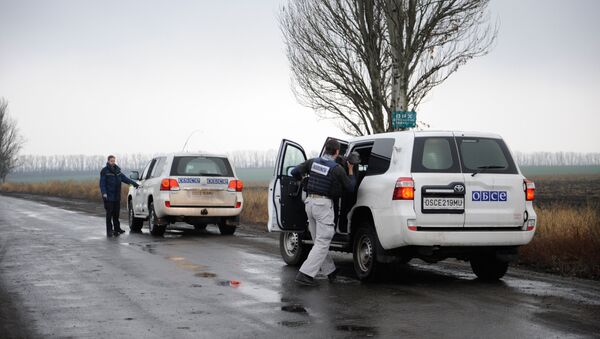 The United States condemns a recent attack on the OSCE Special Monitoring Mission (SMM) in eastern Ukraine, the US Department of State said Sunday.

WASHINGTON (Sputnik) — The State Department accused Donbass militia of the incident, however, provided no proof.

OSCE Detects Ukraine Tanks, Missiles Outside Withdrawn Weapons Area in Donbass
The State Department has also called on eastern Ukrainian militia and Russia to observe the ceasefire, "withdraw all heavy weapons" and allow OSCE monitors access to the area.

Kiev launched a military operation against the self-proclaimed Donetsk and Lugansk people's republics in 2014, when the two regions refused to recognize the new Ukrainian government that came to power in what they consider to be a coup.