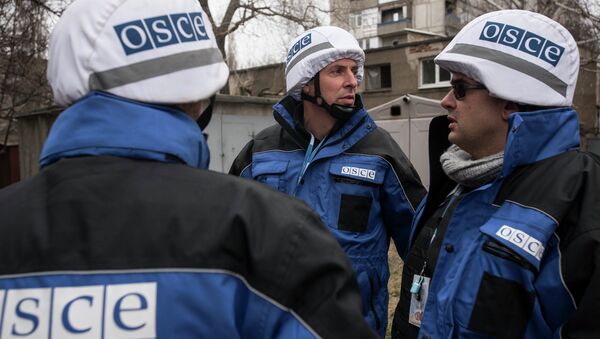 The OSCE detected weaponry designated for the withdrawal in eastern Ukraine, a source in the OSCE’s SMM press service told RIA Novosti on Monday.

"The SMM patrol detected two T-64 main battle tanks near the city of Konstantinovka, located 60 kilometers [37 miles] to the north of Donetsk out of the sites for the withdrawn weapons in the government-controlled areas. There were also detected two Osa surface-to-air missile systems moving to the west near the town of Novoaidar, located 49 kilometers of Lugansk," the source said.

Eastern Ukraine has been in turmoil since April 2014, when the government in Kiev launched a military offensive against militia in Donbass. The warring parties reached a ceasefire deal in February 2015, brokered by Russia, France and Germany in the Belarusian capital of Minsk.

The deal stipulated a full ceasefire, weapons withdrawal from the line of contact in eastern Ukraine, an all-for-all prisoner exchange and constitutional reforms which would give a special status to the self-proclaimed Donetsk and Lugansk people's republics.