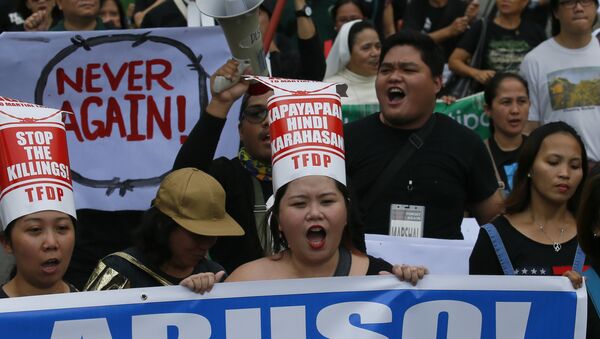 The protests came as the country marked the 31st anniversary of the People Power movement that deposed dictator Ferdinand Marcos after a 20-year rule. Duterte, a fan of Marcos, made possible the dictator's burial in the Philippines Heroes' Cemetery after he came to power, angering many.

Among the roughly 3,000 protesters was former Philippines President Benigno Aquino, who defended de Lima, his former justice minister, as well as current Philippines Vice President Leni Robredo, also a de Lima supporter, who resigned from Duterte's cabinet after being blocked from meetings when she disagreed with Duterte.

Aquino dismissed claims that members of former administrations were simply trying to destabilize Duterte's regime, a defense often deployed by the current leader.

"How can we be causing destabilization when we are actually offering to help," Aquino said, the South China Morning Post reported.

De Lima says she is innocent of the charges of drug trafficking and operating a prison drug ring while justice secretary and that her arrest is revenge for her decade-long effort to bring Duterte to justice for his alleged connection to the "Davao Death Squad" while mayor of Davao City.

Earlier this week, de Lima called the president a "sociopathic serial killer." In a statement on her arrest, de Lima called his administration "power-hungry, morally bankrupt and abusive," the Manila Times reported.

Duterte has been accusing De Lima of drugs crimes for months, and has conducted a personal campaign against her, making allegations about her sex life as well as the supposed drug ring. Manila Times opinion columnist Marlen Ronquillo called on the government to "show us the money" in a column the day after her arrest.

"Only a money trail will clear all doubts that she really deserved to be called the ‘grandmother of drug lords,'" he wrote.

Father Robert Reyes, who spent the night with de Lima in the Senate before she gave herself up to police, told AFP, "People are afraid. If the government can arrest a powerful person like her, what more the little man? That is the implied message of her arrest."

Several others were arrested along with the senator for alleged involvement in running the prison drug scheme.

Fear did not deter around thousands from protesting her treatment and the war on drugs Duterte launched when he assumed office eight months ago, and which is believed to have killed nearly 8,000 people since then. Fewer than half of those killed were suspected of playing a serious role in the illegal drugs trade. Human Rights Watch has warned repeatedly that the crackdown has emboldened and even sanctioned extra-judicial killings by Philippines police.

"Not only Congress, but other pillars of Philippine democracy should be deeply worried," Kine added.

Now, watchers warn of a People Power uprising like the one that toppled Marcos.

"We are taking the matter seriously. We are warning our people about the threat of rising fascism," protest leader Bonifacio Ilagan told AFP. Ilagan, a playwright, was imprisoned and tortured under Marcos' rule in the 1970s.

"The pile of bodies in the Duterte government's war on drugs; arrests and killings of political activists; renewed push for death penalty, and militarization of communities affecting women and children is nothing but a U-turn to full-blown fascism," she said.

Duterte won last year's election on a campaign to end drug violence in the country, and pulled no punches regarding his willingness to allow law enforcement bodies to use lethal force while doing so. He has said he could impose martial law to help him eliminate drug rings.

000000
Popular comments
Among the roughly 3,000 protesters was former Philippines President Benigno Aquino, -- The CIA MUST stop doing this. Stop it! Stop it! BTW, the population of the Phil is about 98 million.
jas
25 February 2017, 22:38 GMT2
000000
Everyone knows who sponsor it. Where is the NGO? And ALL in English? They used to talk Spanish. Reason you see the Spanish names all over. Another stupidity. Now that Russia is welcome the color revolutions begin. And soon even the terrorists. To create a GENEVA talks. And gain a deal. And DUTERTE MUST GO approach. That's what they want. End the ENGLISH ONLY to cut their Influence. Spanish was ok. Those seeds guess where they may come from. Perhaps, Afghan and other drug markets run by west. When you DO NOT let west own, you get the Colombian war type. This was sponsored to prop up the Afghan and other drugs. Check that the war on drugs is at selected areas ONLY. Even a KID notices the scheme. But CORRUPT officials are rampant. Russia should help end the drugs without must problems. Arrest them. IF the gov have the death penalty is NOT Russia's problem.
cast235
26 February 2017, 00:14 GMT2
000000
Newsfeed
0
New firstOld first
loader
LIVE
Заголовок открываемого материала
Access to the chat has been blocked for violating the rules . You will be able to participate again through:∞. If you do not agree with the blocking, please use the feedback form
The discussion is closed. You can participate in the discussion within 24 hours after the publication of the article.
To participate in the discussion
log in or register
loader
Chats
Заголовок открываемого материала
Worldwide
InternationalEnglishEnglishMundoEspañolSpanish
Europe
DeutschlandDeutschGermanFranceFrançaisFrenchΕλλάδαΕλληνικάGreekItaliaItalianoItalianČeská republikaČeštinaCzechPolskaPolskiPolishСрбиjаСрпскиSerbianLatvijaLatviešuLatvianLietuvaLietuviųLithuanianMoldovaMoldoveneascăMoldavianБеларусьБеларускiBelarusian
Transcaucasia
ԱրմենիաՀայերենArmenianАҧсныАҧсышәалаAbkhazХуссар ИрыстонИронауОssetianსაქართველოქართულიGeorgianAzərbaycanАzərbaycancaAzerbaijani
Middle East
Sputnik عربيArabicArabicTürkiyeTürkçeTurkishSputnik ایرانPersianPersianSputnik افغانستانDariDari
Central Asia
ҚазақстанҚазақ тіліKazakhКыргызстанКыргызчаKyrgyzOʻzbekistonЎзбекчаUzbekТоҷикистонТоҷикӣTajik
East & Southeast Asia
Việt NamTiếng ViệtVietnamese日本日本語Japanese俄罗斯卫星通讯社中文（简体）Chinese (simplified)俄罗斯卫星通讯社中文（繁体）Chinese (traditional)
South America
BrasilPortuguêsPortuguese
NewsfeedBreaking
09:31 GMTGeneva to Host New Round of Russian-US Strategic Stability Talks Next Week, American Ambassador Says
09:24 GMTUS House Committee Approves Amendment Recommending Sanctions Against Russian Officials
09:23 GMTSCO to Coordinate Effort to Prevent Threats Coming From Afghanistan, Russian General Staff Says
09:12 GMTAll Crew Members From Crashed Russian An-26 Plane Perished, Remains Found
09:07 GMTBoJo's UNGA Speech: PM Talks Climate Change, Argues Kermit the Frog Was 'Wrong'
09:01 GMTScientists Create Winged Microchip That is Smallest-Ever Human-Made Flying Structure
08:41 GMTBitcoin.org Domain Disabled After Alleged Cybersecurity Breach
08:34 GMTPakistani Military Plane Crashes During Training Flight in Country's Northwest, Reports Suggest
08:33 GMTChinese Foreign Minister Urges G20 to Lift Unilateral Sanctions Against Afghanistan
08:31 GMTRussian Delegation at PACE Session Restricted Due to Sputnik V Non-Recognition, Lawmaker Says
08:28 GMTSwedish Minister: Authorities Failed to Tackle Crime Because They 'Didn't Want to Be Seen as Racist'
08:21 GMTG4 Foreign Ministers Call for Reform of UN Security Council, New Delhi Says
07:55 GMTIndia: Opposition Alleges 'Land Scam' as BJP-Governed State Allocates Land for Hindu Group
07:18 GMTACLU Accused of 'Erasing Women' After it Edited Ruth Bader Ginsburg's Quote on Abortions
06:56 GMTGOP House Members File Impeachment Articles Against Biden Over 'Clear Violations of His Duties'
06:53 GMTUK's Claims About Third Russian Involved in Skripal Case 'Another Lie', Foreign Intel Chief Says
06:42 GMTFormer Islamist Preacher: 'There is a Salafist in Every Swedish Mosque'
06:33 GMTAlgeria Closes Airspace to All Planes From Morocco Over 'Provocations'
06:28 GMTRussia Ready to Cooperate With New German Gov't Based on Mutual Respect, Ambassador Says
05:29 GMTUS Sanctions Suffocating Syrian People, International Community Must Act, Foreign Minister Says