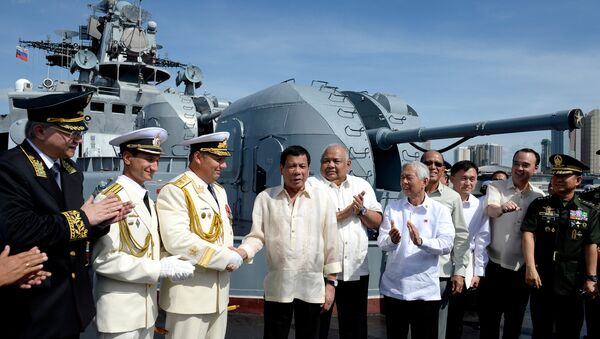 © REUTERS / Noel Celis/Pool
Subscribe
Philippine President Rodrigo Duterte has invited Russian naval ships to cast anchor at the country’s ports “as an ally to protect us,” but is in no hurry to cancel a defense pact with the US and has already backed off from promised defense cooperation plans with Russia and China.

"We welcome our Russian friends. Anytime you want to dock here for anything, for play, for replenish[ing] supplies or maybe [as]our ally to protect us," said Duterte while shaking hands with Rear Admiral Eduard Mikhailov on Friday during a tour of the Russian anti-submarine warship Admiral Tributs docked in Manila.

The Admiral Tributs and the tanker Boris Butoma were dispatched to the Philippines for an unprecedented visit.

The controversial Philippine president, who used to badmouth US President Barack Obama, called UN Secretary General Ban Ki-moon “a fool” and even compared himself with Adolf Hitler, earlier threatened to sever a defense cooperation pact with the United States that allowed Washington to deploy troops and hold military drills in the Philippines.

Captain Duterte: Philippine President May Go Aboard Russian Warships in Manila
After meeting with his Russian counterpart Sergei Lavrov in Moscow in December 2016, Philippine Foreign Minister Perfecto Yasay declared Manila’s intention to build up defense and security cooperation with Moscow.

Yasay’s visit to Moscow was part of preparations for President Duterte’s planned meeting with President Putin in Moscow later this year.

Russia needs naval bases around the world to enhance its defense and foreign policies, as well as to provide technical and logistical assistance to its naval forces deployed on the high seas.

Unlike the US, which has a web of such bases scattered all across the globe, Russia has only one such facility in Tartus, Syria.

Fully aware of this, Russia is considering a return to a naval base in Vietnam. In 2013 the two countries agreed to set up a joint submarine repair base at Cam Ranh and in 2014 facilitated its use for Russian naval vessels.

However, after Moscow hinted that it might want a full-scale naval station in Vietnam, Hanoi made it clear that it would not allow any foreign military bases on its territory.

“We will not enter into any military unions or alliances aimed against any third countries,” a Foreign Ministrty spokesman said in Hanoi.

Still, Vietnam has signed contracts with Russia for the delivery of six submarines, four frigates and a pair of S-300 air defense systems.

Such defense cooperation between Vietnam and Russia is readily encouraged by China, which is wary of any rapprochement between Hanoi and Washington.

Rodrigo Duterte, for his part, earlier said he was ready to join “a new order” led by China and Russia only to back off shorty after.

Duterte Again Threatens 'Bye-bye, America' Over Aid Renewal Delay
In early December 2016, Duterte said that his country was not prepared to enter into any military alliances with either China or Russia, citing a defense cooperation deal the Philippines signed with the US after it gained independence in 1951.

Rodrigo Duterte’s decision may have been prompted by the election of Donald Trump, who the Philippine leader has an affinity for and whom he was quick to tell how much he values his country’s close ties with the US.

During the Cold War years the US had a military base in the Philippines. It has been shuttered ever since, but the Pentagon has reserved the right to use the country’s seaports whenever necessary.