A veteran policeman from Davao city who worked under then-Mayor Rodrigo Duterte said that the man who is now president of the Philippines both ordered and paid for extrajudicial executions while he ran the town, contradicting his testimony from last year.

Arturo Lascañas, who last year claimed that the alleged Davao Death Squad (DDS) was nothing but "media hype," said at a press conference in the Philippines' Senate that he had "made a promise to God to make a public confession" and come clean about his role and the now-president's in the killings, multiple local media sources report.

His remarks at the event, organized by Senator Antonio Trillanes IV, contradicted what he said in Senate testimony in October, when he said the group did not exist and that confessed hit-man Edgar Matobato was lying about DDS murders.

Now, he says, he is telling the truth and Matobato can corroborate his story.

Duterte, as mayor, generally paid between roughly $400 to $2,000 for killings, of which there were many, the former senior police officer 3 said.

He fingered Duterte as the driving force behind the murder of radio broadcaster and Duterte critic Jun Pala, a task Lascañas said he agreed to take on. The reward for killing the journalist was close to $60,000, which Lascañas said he split between himself and others who helped organize the assassination.

Pala survived two attacks before being gunned down in September, 2003. 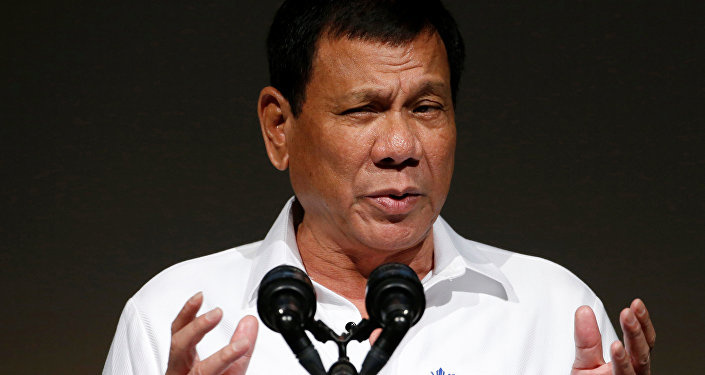 Lascañas also discussed the murder of religious leader Jun Barsabal in 1993, an act Matobato testified in October was planned between five mayors, Duterte among them. Lascañas confirmed the claim.

His "excessive loyalty" to Duterte even led him to kill his two brothers, Cecilio and Fernando, Lascañas said.

Lascañas was described by Matobato as "the most powerful cop in Davao city," in his October testimony, the International Business Times reports. He said the DDS was indeed real and led by police officers, not civil vigilantes, and that it is still functioning.

"Our job was to kill criminals such as drug traffickers, rapist, snatcher," Matobato reportedly said.

Lascañas was presented by the Free Legal Assistance Group (FLAG), an organization of human rights lawyers in the Philippines. He has written an affidavit about his claims which will be submitted to the relevant government agencies, they said. Attorney Arno Sanidad of FLAG said the confession was voluntary and that he hopes Lascañas will next be speaking under oath before before a Senate investigation, Rappler.com reports.

Duterte dismissed the claims through his communications secretary, Martin Andanar, who called the event a "demolition job" intended to derail the president's reforms.

"The press conference of self-confessed hitman SPO3 Arthur Lascañas is part of a protracted political drama aimed to destroy the president and to topple his administration," Andanar said, CBS reported. He did not address any specific accusations made by Lascañas.

Duterte has indeed claimed to be part of the DDS, as recently as 2015, but later said he was joking and that the organization was made up to try to thwart his presidential campaign.

Since Duterte took office eight months ago, some 7,000 people have been killed in his bloody war on drugs in the country. Rights groups say he has emboldened and even directed police to shoot alleged offenders and ask questions later.

How Duterte's 'Unpredictability' Keeps US and Chinese Diplomats on Edge