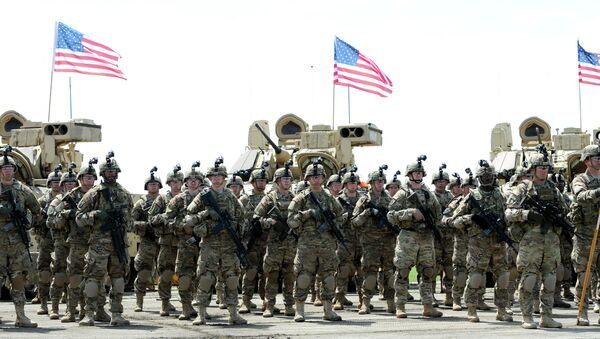 © AFP 2022 / VANO SHLAMOV
Subscribe
Commenting on President Trump's executive order on Friday to launch what he called a “great rebuilding of the Armed Forces,” Russian political and military analysts told Sputnik that it underscores "distrust in NATO," and the alliance's capability of ensuring the security of America.

Trump Orders Nuclear Posture Review, Enhanced Ballistic Missile Capabilities
On Friday, President Trump made his first visit to the Pentagon since his inauguration on January 20. There he announced his intention to launch what he called a "great rebuilding" of the US Armed Forces.

"I'm signing an executive action to begin a great rebuilding of the armed services of the United States," the president said in a brief ceremony that included the swearing in of the new defense secretary, James Mattis.

"We're developing a plan for new planes, new ships, new resources, and new tools for our men and women in uniform," Trump added, though he did not provide additional details. 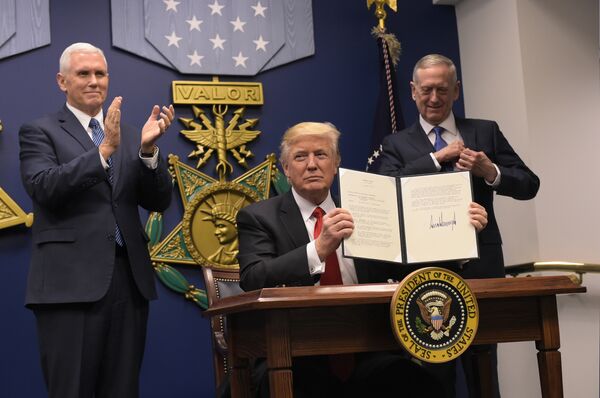 US President Donald Trump shows his signature on executive orders alongside US Defense Secretary James Mattis and US Vice President Muike Pence on January 27, 2017, at the Pentagon in Washington, DC
© AFP 2022 / MANDEL NGAN

The US leader said the order was signed “to ensure the sacrifices of our military are supported by the actions of our government.”

Trump Orders Pentagon to Send Plan to Defeat Daesh Within 30 Days
According to The Washington Post, which says it obtained a draft of the order on Thursday, the document also states it would examine how to carry out operations against unnamed “near-peer competitors,” a term that US officials "typically use to mean China and Russia, but that language is not in the final version."

Within 60 days, Mattis must also submit to Trump a plan to improve the overall readiness of the military by fiscal 2019. It will focus on everything from maintenance backlogs to the availability of training ranges and manpower shortages, as well as the time needed to coordinate and carry out military training.

The order also calls for a review to “reduce commitments not directly related to the highest priority operations to make resources available for training and maintenance.”

Trump also called for reviews of the US military’s nuclear arsenal and of ballistic missile defense, two critical defense areas which have both suffered considerably under the Obama administration.

Commenting on the signed document, Russian military expert and First Vice President of the Academy of Geopolitical Studies Konstantin Sivkov told Sputnik that it underscores "distrust in NATO," and the alliance's capability of ensuring the security of America.

Konstantin Sivkov also noted that this order is addressed, first and foremost, to the US establishment, which still regards Trump as "a dark horse" president, whose aims and ambitions still remain unclear.

Trump Serious About Cooperating With Moscow - Russian Lawmaker
"By addressing the Pentagon, he has made these aims clear," he said.

However he further noted that Moscow should also make certain conclusions from the above statements of the US, leader, who, unlike his predecessor Obama, seems to be pursuing a more decisive foreign policy.

"In the first days of his presidency, Trump has done more that Obama had in a whole year, thus we should expect quick and unexpected decisions from him," the expert said.

"We should make certain conclusions and build-up our defensive potential. Regardless of whatever is said about Trump, due to its geographic position, mentality and a number of other factors, the US remains an antagonist of Russia," Sivkov said.

However at the same time he suggested that the announced rebuilding of the US Armed Forces does not mean the refusal of a compromise between Washington and Moscow, including the joint cooperation in the fight against international terrorism.

"There certainly will be a compromise between the two countries, because for Trump, it is not Moscow but international terrorism which currently remains the main enemy. I think that the US President will master support for President Putin in the fight against it," the expert finally stated.

Trump Reaffirms US Commitment to NATO in Conversation With Hollande
In a separate comment on the same issue, Russian political and military analyst Alexander Perendzhiev, an associate professor in the Faculty of Political Sciences and Sociology at the Plekhanov Russian University of Economics, suggested that Donald Trump has ordered a review of the US military’s nuclear arsenal and of ballistic missile defense to be able to further strengthen the US strategic and conventional armed forces.

Thus, he said, the US President is delivering on his electoral promises to inspect the efficiency of financing of the US Armed Forces and re-equip it with new equipment.

"Trump is placing emphasis on the strategic forces. He is going to strengthen them. And his decisions apparently should prompt Russia's military-political leadership towards the preventive strengthening of Russia's potential," he told Sputnik.