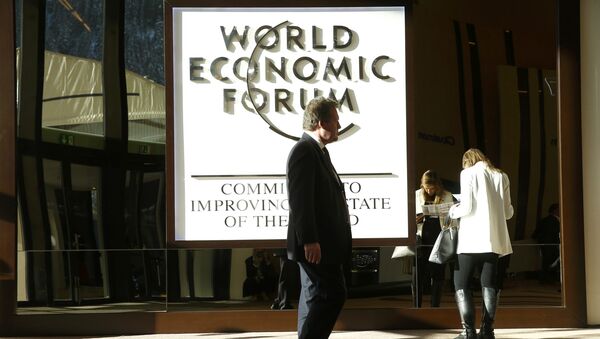 © REUTERS / Ruben Sprich
Subscribe
International
India
Africa
Climate change, the rapidly growing gap between the rich and the poor and cyber-attacks are just some of the risks the world will have to contend with in 2017.

Toying With War: Poles Fear NATO Exercises, Simulations Could Spark Real War
The current social and political conditions may trigger a catastrophe in the global economy, warned John Drzik, President of Marsh Global Risk and Specialties and co-author of the Global Risk Report 2017 published by the World Economic Forum (WEF).

The decision made by US President Donald Trump to withdraw from the Trans-Pacific Partnership has apparently confirmed the suspicions of WEF and Goldman Sachs experts that protectionism is becoming a major threat to the global economy this year, along with Brexit, the migrant crisis, terrorism and the Chinese “debt bomb”, according to Sputnik Japan columnist Lyudmila Saakyan.

According to her, the report identifies environmental and geopolitical risks as the biggest threats to humanity in 2017. Climate change was singled out as a primary concern for the next decade, deemed as a more probable danger than the risk of pandemics or nuclear disaster.

Geopolitical risks, such as large-scale terrorist attacks and interstate conflicts that may be caused by "ineffective regional and global management" were also outlined as a major concern; and the inability of regional and international institutes to cooperate and jointly work on resolving economic, political and environmental problems was declared a risk for the first time.

The examples mentioned in the report include Russia, South Africa and several other nations withdrawing from the International Criminal Court, China refusing to recognize the Hague tribunal’s ruling on the South China Sea territorial dispute and the inability of world powers to come to an agreement on the resolution of the conflict that has been plaguing Syria. The lack of trust between nations which accuse each other of meddling in their sovereign affairs was named as another factor contributing to the geopolitical tensions.

The mass migration, rapidly growing inequality and social polarization caused by ethnic, religious and political factors were described as the most prominent social-economic risks by WEF experts. According to the Credit Suisse report, over half of the world’s wealth (50.8 percent) now belongs to about 1 percent of the world’s population, the super-rich. In 2016 this tendency caused the rise of populism across the world, and the results of the Brexit vote and presidential elections in the US clearly show how these factors influence the political processes, Saakyan points out.

The report also mentioned a number of technological risks, including cyber-attacks, data theft and fraud, and software glitches that may disrupt power, transport and communication infrastructure. Also, rapid advances in robotics and the ongoing automation of the manufacturing process result in growing unemployment and social instability which in turn may lead to riots.

The authors make a chilling conclusion: almost all these risks are interconnected which means they feed off each other. As one gets worse there is a multiplier effect which could easily spin out of control should the world's leaders take their eyes off the ball.