America in Full Retreat? How Trump's Exit From TPP May Bolster China's Advance 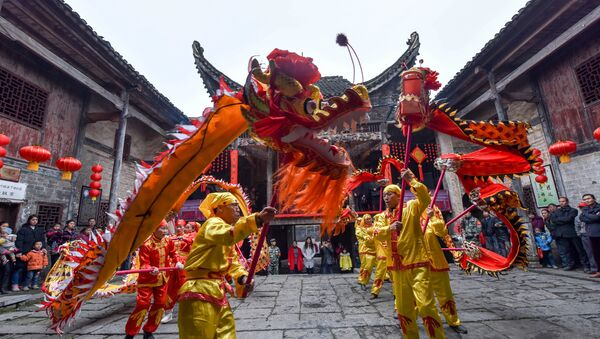 © REUTERS / Stringer
Subscribe
International
India
Africa
US President Trump's decision to quit the Trans-Pacific Partnership (TPP) trade agreement has prompted a heated debate. While advocates of the deal argue that America's withdrawal from the TPP has directly played into the hands of China, their opponents say the US president has taken a step in the right direction.

America's withdrawal from the Trans-Pacific Partnership will cause no harm to the US economy as long as Donald Trump is in control of American trade policies, Eurasian Business Coalition Vice President Ralph Winnie told RIA Novosti.

"I don't think that the US withdrawal from the TPP will have a negative impact on the US while Trump is in control, and involved in the process," Winnie said.

McCain Warns Trump: US Exit From TPP Puts China in Asia’s Economic Driver Seat
According to Winnie, it guarantees that Trump and US CEOs would work together to create new jobs for the Americans.

He has called attention to the fact that earlier this week Trump pledged to cut taxes and regulations "massively" to create more jobs in the US.

"We are going to be cutting taxes massively both for the middle class and for companies —and that's massively," Trump said as quoted by Politico.com.

"We think we can try to cut regulations by 75% — maybe more," the US President added.

Winnie expressed doubts that the TPP could have helped the new US administration to breathe new life into the American economy. The US will now seek to strike bilateral trade deals with other nations, according to the expert. He underscored that the US president is likely to give priority to individual agreements over multilateral global treaties.

However, Andrei Ostrovsky, Deputy Director of the Institute of the Far East, Russian Academy of Sciences, suggested that Trump's decision to rip up the TPP has untied China's hands in the Asia Pacific region.

"Trump's decision [to withdraw from TPP] will allow China to bolster its trade and economic expansion in Southeast Asia," Ostrovsky said at the Rossiya Segodnya press conference.

Trump Team Confident US Can Replace TPP With Bilateral Trade Deals
The Russian academic assumed that without the involvement of the US, the TPP will simply lose its raison d'etre. However, he noted that Australia is still trying to save the deal.

In any event, China is likely to become the main beneficiary of the new administration's move, Ostrovsky highlighted.

It appears that US Senator John McCain shares a similar stance. According to the American senator, the US' retreat from the TPP has put China in Asia's economic driver seat.

By withdrawing from TPP today, Trump — "the dealmaker " — just handed China a giant victory. For free.

For their part, critics of the deal draw attention to the potential harm the TPP could have inflicted on US workers.

Former presidential candidate Bernie Sanders warned that "TPP will allow corporations to outsource even more jobs overseas." He also stressed that the "US sovereignty will be undermined by giving corporations the right to challenge [US] laws before international tribunals." 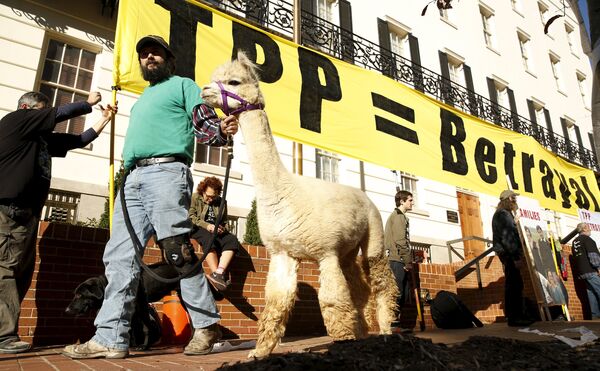 Farm activist Ethan Abbott walks with his alpaca during a protest of the TPP (Trans-Pacific Partnership) held outside the Office of the U.S. Trade Representative in Washington, November 16, 2015
© REUTERS / Kevin Lamarque

In all respects the TPP was "a bad deal," Jean Blaylock, policy officer at Global Justice Now told Sputnik earlier this week.

"TPP was a bad deal that would have pushed a corporate deregulatory agenda in all the countries involved, not just the US. However, without a commitment to a fair trade policy that supports decent jobs, wages and public services, protects the environment, climate and health, and is developed democratically and transparently, we will just get more and more toxic trade deals," Blaylock pointed out.

However, some analysts believe that the project was doomed from the very beginning.

According to the Guardian columnist Owen Jones, the deal was "dead" even before Trump ripped it up.

"Can everyone stop saying Donald Trump killed off the Trans-Pacific Partnership? He didn't. It was already dead. Thanks to pressure from ordinary Americans — yes, it really does work — TPP already lay without a pulse on the floor of Congress," Jones pointed out.

After TPP Trump Will Broker New Trade Deals That Favor US Giants - Campaigners
Responding to those who claim that Trump's move has played into China's hands retired Brown University Assistant Economics Professor Barry Friedman noted that abolishing the TPP would not prevent Washington from striking new trade deals with Asian Pacific nations.

"I don't think it's a big worry that China will 'swoop in' to gain agreements with these countries that will harm US exports — [but] there is plenty of competition against China to maintain their separate identities and to sell similar products outside the region," Friedman told Sputnik, stressing that just like Trump Asian nations put their own national interests first.

On Monday Trump announced that the US was exiting the Trans Pacific Partnership trade deal that his predecessor Barack Obama had negotiated with 11 other nations.