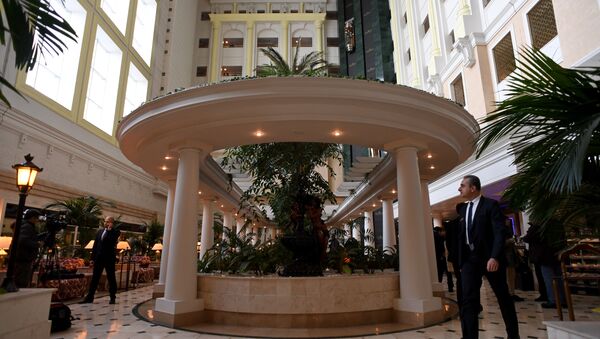 The Syrian government's and opposition factions' representatives are expected to meet in Astana on Monday for talks brokered by Moscow, Ankara and Tehran, following a ceasefire in the crisis-torn country endorsed by the UN Security Council on December 31, 2016.

MOSCOW (Sputnik) — The main round of the negotiations is expected to begin on Monday at 1 p.m. local time (07:00 GMT) and to finish at the same time on Tuesday.

The intra-Syrian peace talks were supposed to take place in Geneva in February 2016, but were suspended two days after kicking off. The last round of the talks was held in Geneva on April 13-27. The Riyadh-formed High Negotiations Committee (HNC) opposition group walked out of the negotiations, citing the continuous fighting in Syria and the lack of progress on humanitarian issues.

On December 17, 2016, Russian President Vladimir Putin and his Turkish counterpart Recep Tayyip Erdogan discussed in a phone call the possibility of a meeting in Kazakhstan's capital Astana between the parties to the Syrian conflict with Russia, Iran and Turkey as potential mediators. Kazakh President Nursultan Nazarbayev supported this initiative and expressed readiness to provide a platform for such talks in the Kazakh capital. Russia has stressed that the Astana and UN-backed Geneva platforms are not rivals, with the latter set to complement the former.

Moscow will be represented by an interagency delegation of the representatives of Russia's foreign and defense ministries headed by Director of Middle East and North Africa Department in the Foreign Ministry Sergey Vershinin.

"There will be an inter-ministerial delegation that will include representatives of the Ministry of Foreign Affairs and the Ministry of Defense of Russia," Russian Deputy Foreign Minister Mikhail Bogdanov said.

"The delegation of the Islamic Republic of Iran headed by Deputy Foreign Minister Hossein Jaberi Ansari will participate in the talks on Syria in Astana on January 23," the statement by Iranian Foreign Ministry, circulated by the Iranian Embassy in Kazakhstan, said.

Syria Grants Iran Permission to Help Rebuild War-Torn Country
It was added in the statement that Iran considers the negotiations an opportunity to establish dialogue between the Syrian government and opposition to settle the conflict in the country politically.

"Over the recent days, Iran has had consultations with different parties to the conflict in order to prepare the basis for bridging differences and reaching an agreement," the statement said.

Turkey has not yet made a decision on who will represent the country at the talks on Syria, and will decide depending on the level of other governments' delegations, Turkey's Deputy Prime Minister Mehmet Simsek said.

"We will take into account the partners participating from other countries, and decide accordingly," Simsek said.

Spokeswoman for EU Foreign Affairs and Security Policy Nabila Massrali confirmed that the European Union would be represented at the upcoming conference in Astana.

US State Department spokesman John Kirby announced that the United States had received an official invitation from Moscow to take part in the Astana meeting.

World
US Lawmaker to Travel to Damascus to Help End Syrian Conflict - Spokeswoman
"Our Embassy in Moscow did receive an invitation delivered to them from the Russian Foreign ministry which they duly passed to us," Kirby said. "So we are aware that there is an actual invitation for the US to participate. But so far as I know, no decision has been made."

Russian Foreign Minister Sergey Lavrov said that Moscow hoped that the administration of incoming US President Donald Trump would be able to delegate its own expert to the talks.

"We hope that Donald Trump's administration will also be able to delegate a Middle East expert, given that Russia and the US co-chair the International Syria Support Group (ISSG)," Lavrov said.

Trump spokesman Sean Spicer confirmed that the participation was possible.

"As you know, General Flynn was invited in a call that he had with the [Russian] Ambassador [to the United States Sergey Kislyak] on December 29," Spicer stated. "I don't have anything to update you on that. But, I think, the scenario is that what President-elect is in, what's going on there [in Syria] is a major concern … We clearly have the desire to work with other countries and nations."

Syria's Permanent Representative to the United Nations Bashar Jaafari confirmed that he would lead the Syrian government’s delegation at the upcoming talks.

"Yes, I will lead the government delegation during the Astana meeting," Jaafari said.

Jaafari will be accompanied by Syrian ambassador to Russia Riyad Haddad and Adviser to Foreign and Expatriates Minister Ahmad Arnous.

Turkish Military, Free Syrian Army Shell Kurdish Villages in Northern Syria
The representatives of 14 groups of Syrian armed opposition, which signed the ceasefire agreement on December 29, have been invited to take part in the talks. Mohammed Alloush, who is a former chief negotiator for the High Negotiation Committee, would head the delegation.

The list of the groups includes Jaysh al-Islam, Faylak al-Sham, Jaish al-Mujahideen, Jabhat al-Shamiya, Fastaqim and Suvar al-Sham, among others.

Representatives of Free Syrian Army (FSA) and High Negotiation Committee will attend the talks as well.

Ahrar al-Sham militant group said that it supported the talks but would not take part in the event.

"Ahrar al-Sham, one of the largest armed opposition groups in northern Syria, will not attend the Astana meeting. They will abstain from participation and limit themselves with remote support," the source said.

The Syrian High Negotiations Committee welcomed efforts on organizing a meeting between country's warring parties despite missing the event, the HNC statement said.

"The High Committee highly appreciates efforts made for success of the meeting in Astana, considering it as an important preliminary step for the future round of political talks, that are going to be held in Geneva on February 8, according to [UN Special Envoy for Syria] Staffan de Mistura," the statement said.

Members of a new Syrian opposition group, the Damascus Platform, are ready to take part in peace talks on Syrian reconciliation that will be held in Astana and Geneva, the group’s spokesman Tarek Ahmad said.

"Damascus Platform is ready to take part in peace talks on Syrian reconciliation in Geneva and Astana," Ahmad said adding that his group has not received invitations to the negotiations yet.

Turkish-Backed FSA Steps Up Fight Against Syrian Democratic Forces
The Damascus Platform was formed in November 2016 and unites a wide spectrum of the Syrian opposition groups, lawmakers and members of the Syrian civil society.

The Syrian Democratic Forces (SDF) opposition group will not support the results of the meeting on Syria in Astana, as the SDF has not received an invitation to attend it, SDF spokesman Talal Selo said.

The SDF consists mainly of Kurdish and Arab detachments, and participated in operations against Daesh with the support of the United States.

The Syria’s opposition National Coordination Committee for the Forces of Democratic Change (NCC) was not invited to participate in the intra-Syrian negotiations in Astana, NCC leader Hassan Abdel Azim said.

"If we are invited we will discuss the issue with interest … We welcomed the meeting in Astana and knew that armed groups and the Syrian army would be proposed to discuss the ceasefire," Abdel Azim said.

"In light of the complexity and importance of the issues likely to be raised in Astana, and of the senior level at which the conveners of the meeting will be represented, the Secretary-General has asked Mr. de Mistura, to lead the UN team at the talks. The Secretary-General is looking forward to the Astana meeting being a positive step, ahead of the resumption of intra-Syria negotiations in Geneva," the statement read.

De Mistura did not rule out inviting representatives of the armed Syrian groups attending the talks in Astana to further negotiations in Geneva under the UN auspices.